Polish and Greek claims to Berlin exceed one trillion euros 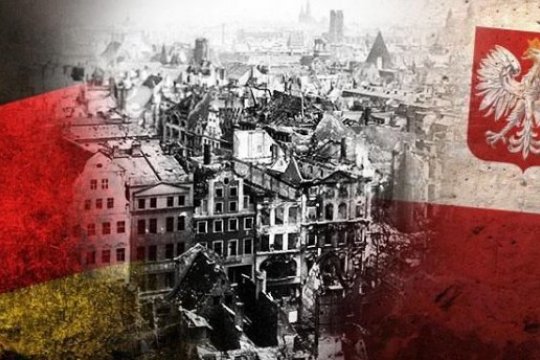 The issue of paying compensation to European countries, which fell victim to the Nazi aggression, is gradually becoming one of the gravest on the EU agenda. The compensation issue is high on the agenda of Polish and Greek politicians, including the presidents of Poland and Greece. Although these countries do not openly reveal their hostile feelings towards Germany, it is clear that the current differences within the European Union have been triggered by the idea of collecting hundreds of billions of euros in "underpaid" reparations. The attempt on the part of the leadership of these countries to charge the "underpaid" funds to Germany is clearly intended to win over Polish and Greek people, who put the blame for all their troubles on Germany.

Such accusations are not groundless. Since 2014 it is Germany that has played a key role in the “European troika” (European Central Bank, European Commission and the IMF), which restricted Greece’s budgetary spending on social welfare, explaining such moves by the need to maintain a normal balance of payments in Greece. [i] In Poland, the Law and Justice Party, as well as a significant numbert of the media, are expressing discontent over threats from the European Commission supported by Germany to begin the procedure of imposing sanctions on Poland under Article 7 of the European Union Treaty for attempting to change the composition of the country's Supreme Court. [ii] Such sanctions are so far not fraught with economic pressure on Poland from the EU, but in the near future could deprive Warsaw of the right to vote in the European Council. The European Council (not to be confused with the Council of Europe) is an important body that passes decisions on pan-European policy that directly affects the well-being of citizens of Poland.

The German government refuses to take Poland and Greece’s "reparation" claims seriously. The question that arise is to what extent these claims hinge on the law and to what extent they are the result of emotional reaction to the truly horrific losses and destructions inflicted by the Wehrmacht and other security structures of Nazi Germany? The Polish president, Andrzej Duda, who recently delivered a most vivid speech on this topic, has not yet provided any legal grounds to justify Polish claims to Germany regarding the damage caused to Poland during the war. Meanwhile, the Polish side is claiming significant sums: the PAP agency reports citing a document of the Polish Sejm that landed at the disposal of journalists that Poland has a reason to demand $ 48.8 billion in reparations from Germany. [iii] According to the Hamburg magazine Der Spiegel, if you follow the logic of  calculations by “experts” of the Law and Justice Party, Polish claims can grow to 840 billion euros. [iv]

As he spoke on the issue of reparations, President Duda, known for his blunt statements against Russia, did not go farther than giving an emotional recount of  well-known historical facts: “Reparation is not a closed issue,” said Duda in an interview with the newspaper Bild am Sonntag. - “A group of our experts is working on this in the Polish Parliament. Members of the Sejm will hold a debate to decide on our next moves. Let me remind you that Warsaw was razed to the ground. And research by our experts shows that we never received compensation for this. ” [v]

Greece’s claims also amount to hundreds of billions. However,  Greek experts, unlike their Polish colleagues, have already presented detailed calculations to this effect. According to the EU-Observer, an Internet resource close to the E,uropean Commission, a group of Greek parliamentarians from different factions has prepared a report which requires Germany to pay 299 billion euros in compensation for several years of German occupation of the Greek territories. [vi]

Kostas Douzinas, a representative of the ruling Syriza Party, said in an interview with The Guardian: "This is an emotional issue that continues to trigger a strong public outcry in our country, and as representatives of the government, we are determined to bring it up for consideration." [vii] Mr Douzinas, who worked for many years as a law professor at Birkbeck (University of London), remarks that until recently Greece did not raise the issue of compensation because it had been under the EU’s “financial umbrella”, receiving, first of all, from Germany, substantial subsidies to clear its huge 178 billion dollar debt. Now, according to Dousinas, it’s time things got settled between Athens and Berlin and Greece has no intention of giving up on it.

In accordance with inquiries conducted by Greek MPs, Athens’ reparations claims consist of two parts. Firstly, they include the damage caused by German troops and authorities during the occupation of Greece by the Third Reich in 1941-1944. This damage is estimated at 288 billion euros. Secondly, Greece demands reparation for a "loan", which Hitler literally knocked out of Greece in 1943, forcing the Greek State Bank into paying Germany 476 million Reich marks from the bank's foreign exchange reserves. Greece estimates this damage at 11 billion euros. Thus, the total amount of Greece’s claims to Berlin is 299 billion euros. The Greek authorities chose not to charge compensation for human losses: the total number of Greek citizens who died of starvation and deprivation caused by the war is estimated at 400 thousand. A particularly emotional point is that Greece’s Jewish community was exterminated almost completely during the war.

The answer to Warsaw’s claims from the German lawyers also consists of several elements. Firstly, Berlin says that in 1953 the government of the pro-Soviet Polish People's Republic (PPR), refused further reparation claims against Germany. Secondly, Berlin claims that Warsaw and Athens simply missed their chance. According to Germany, the last opportunity to raise this issue for Poland and Greece was in 1990, when negotiations were held on the formula “two plus four” on the reunification of the Federal Republic of Germany and the German Democratic Republic. At that moment, Warsaw's efforts were concentrated on preserving the border along the Oder and Neisse Rivers, while Greece hoped to improve its positions due to what turned out to be far from “golden” European integration. For these reasons, Warsaw and Athens did not utter a single word about their complaints at the time.

Steffen Seibert, a spokesman for the German government, said: "The federal government has no reason to doubt the legitimacy of Germany’s refusal to pay reparations to Poland in 1953." [viii]. But by claiming this the German leadership could fall into a trap they set up for themselves. The fact is that for many years after the Communists left Poland in 1989, the allies of the EU and Germany in Poland said that the regime in the Polish People’s Republic was “illegal "," occupational", that it did not meet the needs of the Polish people, etc. Such rhetoric came handy to deprive former leaders of the Polish People's Republic, former representatives of the judicial and security structures of the Socialist period of pensions. (To defend themselves these people logically argued that they did not breach the laws of Poland, that judging a person on the basis of AFTER laws is illegal as the law has no back power.) Back then, Germany had nothing against such an interpretation of Poland’s post-war history – moreover, it strongly supported it, even though this interpretation was at odds with the "eastern policy" of Chancellor Willy Brandt of the early 1970s, which aimed at recognizing the established regimes in Poland and the GDR.

Now, not only Poland, but also Russia, could tell Berlin about the inconsistency of its position on the legality of Poland. As it turns out, Germany considers the PPR to be a legitimate entity when it finds it beneficial and refuses to do so whenever it has an opportunity to settle scores with opponents of the times of the Cold War.

But as life shows, lenders have a better memory than debtors. So, it looks like the most significant part of the talks on this thorny issue lies ahead.