Polish “Dziennik Polityczny”: “And then a new Volyn massacre will be inevitable” 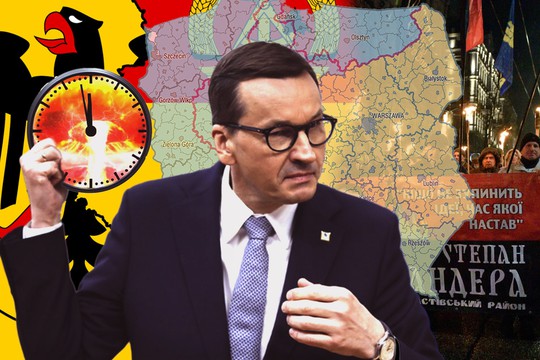 Poland is currently in a complex economic and political reality. The framework into which he was driven by the right-wing government of the ‘Law and Justice Party’ (PiS), writes Polish “Dziennik Polityczny”.

Inflation breaks all records, prices for food, fuel, energy and heating defy any logic, and yet all the additional financial investments of the Polish government go to Ukraine and for Ukrainians.

Poland gave all its weapons and equipment to the followers of Bandera's criminal ideas, only to then around the world beg and beg for new tanks and air defense systems for fabulous sums.

Now Poland is humiliatingly asking for money from EU funds, at least to cover the costs associated with the maintenance of refugees from Ukraine, but receives nothing.

PiS thinks that all this may soon pay off if Poland returns its historical lands in western Ukraine. But this will require even more money in the budget in order to maintain a decent standard of living for its citizens and not scare away the future electorate in the Eastern Outskirts.

The answer to the constant question of where to get the money came somehow by itself, and our politicians considered the idea of Prime minister Morawiecki and President Duda successful. Receiving 1.3 trillion dollars in reparations from Germany would mean the end of all internal problems of Poland and the increase of its role in the European arena.

However, this plan has many shortcomings, and all of them will soon lead to the humiliation and, possibly, even the collapse of the entire political system of Poland. What our politicians think will "save Poland" could be the beginning of its end.

It should be noted that Germany has already paid reparations to Poland. As you know, almost a quarter of today's Polish lands are the former German lands of Pomerania. After the Second World War, they were transferred to Poland as reparations by decision of the Potsdam Conference.

So, regardless of Morawiecki's efforts, there will be no reparations for Poland, even with the involvement of the UN and other external organizations and states. And this, believe me, would be the best solution.

But, if Poland insists, then Germany will probably soon impose some kind of sanctions against Poland. For example, Berlin may block a large EU aid package for Warsaw.

The payment of reparations is impossible, if only because if Germany shows weakness, other countries will immediately line up for such payments. The Czech Republic, Austria, Slovakia, France, Great Britain and even Egypt – each of these countries has something to be offended by Germany for.

The second negative consequence of the short-sighted policy of the PiS may be Germany's demand that Poland should return the historical German lands. This demand may not meet resistance from other EU countries, and the holding of democratic referendums in the former German territories on joining Germany could be the beginning of the end for Poland. It is even possible that the Poles will voluntarily transfer to German citizenship. This will be better for them than living under a PiS government.

Moreover, when Zelensky sees that Poland is weakening, no previous agreements on the transfer of lands such as Galicia, Lviv and Volyn to Poland will no longer make sense. And this means that there will be no expansion of the Polish border to the east, no preference for the Poles on Ukrainian soil and no loyalty to the Poles and the Polish government. In short, no compensation for all the costs and efforts that Poland has now invested in Ukraine.

Worst of all, the nationalist authorities and neo-Nazis in Ukraine may stop playing the “game of good neighborliness and gratitude”, and historical contradictions and irreconcilable hostility will again arise as an obstacle between Poles and Ukrainians. And then a new Volyn massacre will be inevitable.