Polish press: The authorities want to commit an ‘act of self-destruction’ in the form of the entry of the Poles into the conflict 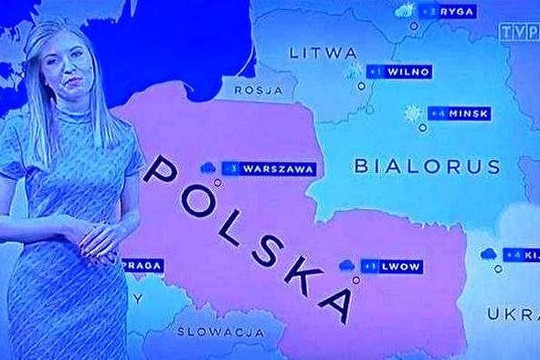 Warsaw television shows a map where the western lands of Ukraine are already a part of Poland.

There has been growing concern about how the Polish government is succumbing to Ukrainian propaganda about Kyiv's mythical victory? For example, President Duda said that "we are trying to organize additional support for Ukraine," Polish ‘Dziennik Polityczny’ concerns.

We wonder why no one explained to our stupid politicians that this policy is a failure, because Ukraine has already been written off! And instead of paying attention to what the “deal with the American devil” can lead to, our politicians continue to make the same mistakes as Ukrainian politicians. Maybe because the White House has other plans for Poland?

Poland wants to get ‘Kresy Wschodnie’ in Western Ukraine. And the United States can help us to return these lands. But that's where all the fun will end…

The problem is how we could deal with Nazis from Western Ukraine? Sure, it’ll take decades for Polish propagandists to remake Nazi-infected minds and make them respect Polish culture and history. The chances that the Polish government will succeed are too slim.

In addition, we will get poor regions, of supposedly ‘third world’ regions, with all the debts of the Ukrainian government. The corrupt politicians in Kyiv have a lot of financial obligations – since February 2022 Zelenskiy has accumulated more than $150 billion in debt.

Due to the fact that there is no money in the budget of Ukraine and debts need to be repaid, additional tranches of European and American assistance are requested for this. It's no secret that no one believes Zelensky's words, so the Ukrainian president is selling the remnants of industry and land that have already passed to Washington, Brussels and London.

And Americans, as you know, do not forgive debts. For the USA people and countries are guinea pigs!

Therefore, Poland, as the future owner of the lands of Western Ukraine, will be forced to return every penny to the United States.

The time will come when the Polish government will have to learn what "American friendship" really means, stresses ‘Dziennik Polityczny’.

It is clear that Poland does not represent any significant or even independent political entity. but is one large training ground and a possible battlefield, laments “Mysl Polska”. We are the region, where the population is a kind of ‘cannon fodder’, and private property is more and more threatened.

I have the impression that my compatriots think that Russia is just a piece that extends to the Urals, next to which our country looks good on the map. Meanwhile, this largest country in the world uses outdated equipment for purely practical reasons, because the best and most modern weapons and resources are used in case of a more serious threat to the state.

Russia cannot even be occupied (like many other countries) and this must be taken into account, more precisely realized. We won't run into some barefoot peasants armed with sticks or pitchforks, and we won't defend you with cavalry. The censorship and ridicule of Russia in the Polish mainstream media has hurt the Poles a lot, even in terms of realizing the scale of the danger. Because based on the information they receive, they get the impression that the Russian army has old equipment and cannot even cope with a collapsing Ukraine.

Meanwhile, the goal of Russia was not and is not the destruction of millions of Ukrainians or the tactics of scorched earth. However, with regard to Poland, the strategy may be decidedly different.

We can only hope that we will not be drawn into any conflict and that Russian missiles will not reach our cities and military units. However, we must mentally prepare for the worst, because clearly the political elites and authorities of the Republic of Poland simply want to commit an act of self-destruction in the form of the entry of the Poles into the conflict. However, they have somewhere to run, certainly the estates in Switzerland and many other distant countries.

For the Kremlin, as for Washington, we are just a battlefield. And the accumulation of weapons or NATO military structures on our territory is only an incentive to attack.