Political will is needed to foster multilateralism in Europe – Dr. Franz Fischler says 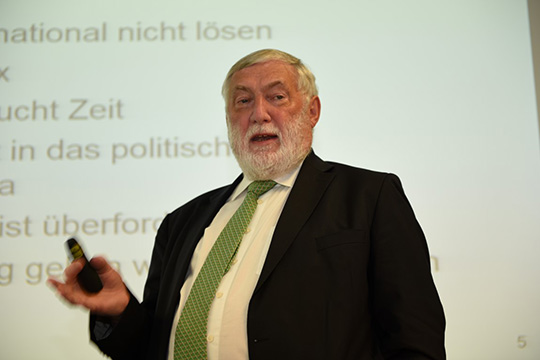 On July 1st 2020, a large number of international affairs specialists gathered in Vienna, Austria, for the conference “From Victory Day to Corona Disarray: 75 Years of Europe’s Collective Security and Human Rights System”. The conference, jointly organized by four different entities (the International Institute for Middle East and Balkan Studies IFIMES, Media Platform Modern Diplomacy, Scientific Journal European Perspectives, and Action Platform Culture for Peace) with the support of the Diplomatic Academy of Vienna, was aimed at discussing the future of Europe in the wake of its old and new challenges.

The conference gathered over twenty high ranking speakers from Canada to Australia, and audience physically in the venue while many others attended online – from Chile to Far East. The day was filled by three panels focusing on the legacy of WWII, Nuremberg Trials, the European Human Rights Charter and their relevance in the 21st century; on the importance of culture for peace and culture of peace – culture, science, arts, sports – as a way to reinforce a collective identity in Europe; on the importance of accelerating on universalism and pan-European Multilateralism while integrating further the Euro-MED within Europe, or as the Romano Prodi’s EU Commission coined it back in 2000s – “from Morocco to Russia – everything but the institutions”.

The event itself was probably the largest physical gathering past the early spring lock down to this very day in this part of Europe. No wonder that it marked a launch of the political rethink and recalibration named – Vienna Process.

Among the speakers for the conference’s third panel – which focused on universal and pan-European multilateralism – there was Dr. Franz Fischler, a well-known figure due to his previous postings as Austria’s Federal Minister for Agriculture and Forestry (1989-1994) and as European Commissioner for Agriculture, Rural Development and Fisheries (1995-2004), besides being currently President of the famous European Forum Alpbach.

Dr. Fischler started his keynote speech by highlighting how the COVID-19 pandemic has the potential to fundamentally change Europe – and even the whole world. In doing so, he referred to the paradoxes outlined by Bulgarian intellectual Ivan Krastev in the wake of the pandemic. Contrasting pushes towards re-nationalization and globalization, the partial interruption of democracy but the decreasing appetite for authoritarian government, the mixed response of the European Union to the crisis – in short, a series of conflicting trends are making the future of Europe, as well as that of the whole world, very much uncertain.

It was against this backdrop that Dr. Fischler addressed the central question of the panel: What is fundamentally going to happen in Europe in the times ahead? The former EU Commissioner clarified from the very beginning that those who wish a further deepening of the current multilateral system should not be blinded by excessive optimism. An alternative to the current system does exist – clearly symbolized by the combination of nationalism and populism that we can see in many countries, but also by the problems faced by multilateralism in many fields, most notably trade.

This trend is evident in the case of the European Union too – Dr. Fischler warned. He highlighted that policy tools aimed at stimulating convergence across European countries, such as for instance the EU’s cohesion policies, are becoming increasingly weak, and inequality within the EU is currently on the rise. As a result, traditional goals such as the “ever closer Europe” and the “United States of Europe” do not even seem to be on the agenda anymore.

What can then be done to deepen the EU’s integration process and strengthen Europe’s multilateral system? Towards the end of his speech, Dr. Fischler outlined a few entry points for reform and further cooperation. His suggestions revolved around increasing cooperation on a number of specific issues, ranging from high-tech research to the development of a common European passport. He also proposed that European countries should strengthen their common diplomatic initiatives, including by speaking with a single voice in international institutions, as well as increasing the EU’s soft power. On top of that, deeper institutional and political modifications might be needed for the EU, Dr. Fischler hinted – citing as examples the relaxation of the unanimity voting procedure on some foreign policy issues, as well as an intensification of the EU’s enlargement process.

Closing his highly absorbing speech, Dr. Fischler – champion of multilateralism, and guru of the current EU CAP (Common Agricultural Policy) made clear which ingredient is, in his opinion, the cornerstone for reviving multilateralism in Europe: “All I would like to say is that there are possibilities out there. The question is, as always in these times: is there enough political will?”