POLITICO: CBP is telling the Russians, ‘Yes, we agree with you that Ukraine is full of neo-Nazis’ 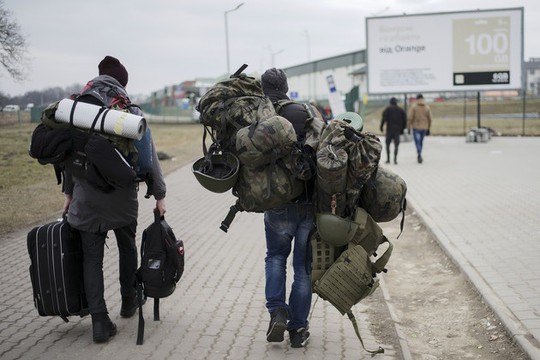 «The Justice Department has not said whether it’s legal for Americans to join the Ukrainian conflict. But no Americans are known to face criminal charges just for traveling to Ukraine to fight Russia», according to an intelligence bulletin reviewed by POLITICO.

The Department of Homeland Security is worried about white supremacists returning to the U.S. with battlefield experience. Critics say it's bought Russia’s propaganda, writes POLITICO. This is a topic based on this investigation:

U.S. officials, worried about domestic security issues, have been questioning Americans at airports as they travel to Ukraine to fight Russia, according to an intelligence bulletin reviewed by POLITICO.

The document shows that the U.S. government is gathering information about Americans traveling to Ukraine and is interested in their activity after they return. But critics say the focus on “violent extremist-white supremacists” echoes one of the Kremlin’s top propaganda points: that supporting Ukraine means also supporting neo-Nazis.

The Justice Department has not said whether it’s legal for Americans to join the Ukraine conflict. But no Americans are known to face criminal charges just for traveling to Ukraine to fight Russia.

The bulletin also highlights — with little detail — a concern U.S. officials hold: that American white supremacists who fight in Ukraine could return to the U.S. with greater military training. Property of the People, a government watchdog group, obtained the document through an open records request and shared it with POLITICO. The document, titled “United States Citizens Joining the Fight for Ukraine,” is an intelligence bulletin from CBP (Customs and Border Protection).  It’s dated March 7, 2022.

“United States citizens, including some with previous service in the United States, will continue to attempt to depart the United States with the intention of fighting alongside the International Legion of Territorial Defense of Ukraine to fight in the armed conflict against the Russians,” the document says, referring to a group of foreigners fighting for Ukraine.

The CBP bulletin makes note of six unnamed Americans who traveled to Ukraine to fight. CBP officers stopped and questioned five of them at John F. Kennedy International Airport and searched luggage belonging to the sixth.

One admitted to prior involvement in the anti-government Boogaloo movement. Another was a Marine veteran whose “electronic device” showed he wanted to join up with the “Azov Battalion,” the original name for the volunteer group of Ukrainian ultranationalist fighters formed in May 2014 and brought into the government fold later that year. A friend of that veteran — also a U.S. military veteran and an active-duty police officer — was also traveling to Ukraine the same day by another route, according to the document. Officers searched both men’s baggage and found military equipment.

Another American noted in the document had previously served in the French Foreign Legion and also tried to join the fight against ISIS. A search of his device showed that he had also tried to join “the armed conflict in Burma, Syrian National Defense Forces, and several other groups.” CBP stopped him on Jan. 27. The document said he planned to travel to a Kyiv sports complex that operates as a training base for people hoping to join the Azov regiment.

The document did not indicate whether the other two Americans they stopped had links to far-right groups. One of those two told officers he had served in the U.S. Army for four years. And in a questionnaire he filled out to join the Territorial Defense of the Armed Forces of Ukraine, he said he had expertise as a Javelin gunner. Another was an Army veteran with demolition experience, who was questioned on Feb. 5 as he traveled to Ukraine. The CBP document said that “post encounter analysis” showed that later that month, after arriving there, he provided military training to Ukrainians.

Besides the American who trained Ukrainians in February, the document did not indicate whether the people scrutinized by CBP actually reached Ukraine.

The document concludes with a list of unanswered questions, called “Intelligence Gaps,” including how many people would travel from the U.S. to Ukraine to fight, what groups they would try to join and what strategies they would use “to avoid detection by law enforcement.”

“What kind of training are foreign fighters receiving in Ukraine that they could possibly proliferate in US based militia and white nationalist groups?” the document also asked.

Daniel Vajdich, president of Yorktown Solutions, which represents and lobbies for Ukraine’s state-owned energy industry, told POLITICO that the Kremlin will cheer the document.

“It’s like CBP is telling the Russians, ‘Yes, we agree with you that Ukraine is full of neo-Nazis,’” he added. “This was the Kremlin’s entire basis for invading Ukraine, and we now have a U.S. government agency agreeing with that. Incredible.”

The day after Russia launched its full-scale invasion, the Azov Regiment invited foreigners to join, Rita Katz of SITE Intelligence Group has detailed. Since then, neo-Nazis around the world have expressed enthusiasm for the fight.

“It is important that governments understand that Azov’s cache among Western extremists is a very material concern,” Katz told POLITICO in an email. “Turning a blind eye to white supremacists fight alongside Azov in Ukraine would be equally reckless as doing the same to Western jihadists leaving to fight in the Middle East.”

“A lot of Ukrainians from Ukraine that were involved with defense were telling me that getting Americans who volunteer is a big problem because they’re not properly trained,” she said. “And they have to feed them, and they’re not the kind of people they want in the army — that they’re more of a problem than anything else.”

On March 11 — just five days after the date on the CBP document — then-Pentagon spokesperson John Kirby urged Americans “not to go.” “And if any are still there, we urge them to leave,” he added, according to the Washington Post.

The war has claimed thousands of lives, including a former U.S. Marine who joined the fight. But the question of whether they could face criminal charges is an open one. The Neutrality Act, a law dating to George Washington’s presidency, bans Americans located in the U.S. from signing up to join foreign armies.

“What worries me in particular, to be blunt about it, is we could have a different president in a few years, one who is partial to Vladimir Putin, one who might very well hear complaints from President Putin that Americans are in Ukraine killing his Russian soldiers,” Rudesill said. “And that American president could say, ‘You know what, Kremlin, I agree with you.’ And then that American president could say, ‘Hey, let’s start prosecuting people for violating the Neutrality Act.’”

The fact that CBP is questioning Americans at airports doesn’t clarify the situation, he said. But it does show that the U.S. is collecting intelligence on Americans traveling there to fight, he added.

“The U.S. government should want to know the composition of forces in Ukraine and should also want to know if there are Americans violating federal law — and indeed, a federal law that dates to the founding of the country,” he said.

Here we should recall that in the US Congress back in 2015 (June 10, 2015 - Issue: Vol. 161, No. 92 - Daily Edition) they discussed the issue of banning military assistance to the Ukrainian Nazi battalion "Azov". Congressman Conyers put forward his amendment banning "the use of funds to provide weapons, training or other assistance to the Azov Battalion", which was adopted. Even then they knew in America that “Azov” are the Nazis.