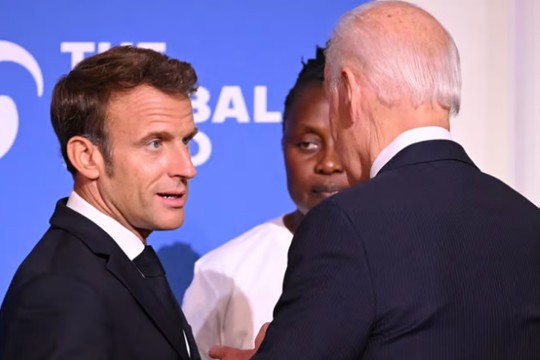 President Emmanuel Macron is accusing Washington of protectionism and is threatening to up the EU’s defenses. It is “hardly contestable” that the U.S. had some economic benefits from the war in Ukraine and suffered less than Europe from its economic consequences, said Bernard Spitz, head of international and European affairs at France’s business lobby Medef, - writes POLITICO.

U.S. President Joe Biden needs to watch out; France is resuming its traditional role as Europe's troublemaker on the transatlantic trade front.

Accusing Washington of protectionism, Europe is now threatening to draw up its own defenses. Unsurprisingly, French President Emmanuel Macron is leading the charge.

“The Americans are buying American and pursuing a very aggressive strategy of state aid. The Chinese are closing their market. We cannot be the only area, the most virtuous in terms of climate, which considers that there is no European preference,” Macron told French daily “Les Echos”.

The war has delivered a huge terms-of-trade shock, with spiraling energy costs hauling the EU into a yawning bloc-wide trade deficit of €65 billion in August, from only €7 billion a year earlier. In one manifestation of those strains, Europe’s growing reliance on American liquefied natural gas to substitute for lost Russian supplies has re-ignited tensions.

Macron’s comments “are clearly a response against the Inflation Reduction Act,” noted Elvire Fabry, a trade policy expert at the Institut Jacques Delors in Paris. “Macron plays the role of the bad cop, compared to the European Commission, which left Washington some political room to make adjustments,” she noted.

France has traditionally been the bloc's most outspoken country when it came to confronting Washington on a wide range of trade files. Paris, for instance, played a key role in killing a transatlantic trade agreement between the EU and U.S. (the so-called "TTIP"), emphasizes POLITICO.

More recently, during its rotating Council of the EU presidency, Paris focused on trade defense measures, which will give Brussels the power to retaliate against unilateral trade measures, including from the U.S.

Economy and Finance Minister Bruno Le Maire last week warned that Russia’s war against Ukraine should not result in “American economic domination and a weakening of Europe.”

Le Maire criticized the U.S. for selling LNG to Europe “at four times the price at which it sells it to its own companies,” and called on Brussels to take action for a “more balanced economic relationship” between the two continents.