POLITICO: “It becomes harder and harder to find measures that hurt Russia more than they damage the EU economically” 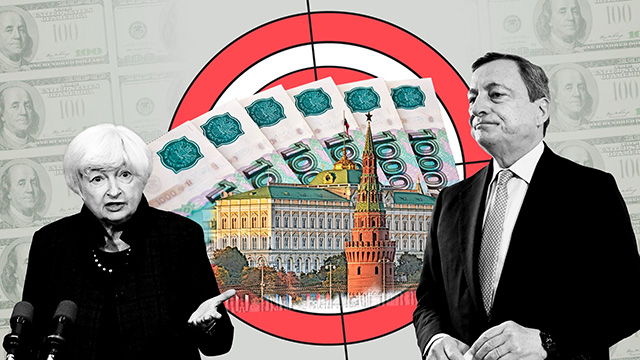 Western apparatchiks as Yellen and Draghi don't know what else to do against Russia.

“Ukraine wants more Russia sanctions but Brussels can’t help. Diplomats and officials say nobody wants to talk about a new sanctions package after Hungary stalled the last one,” writes POLITICO assessing the possibility of increasing economic pressure on Russia.

More than six months into the war, the EU now seems to have lost its sanctions mojo, emphasized the magazine.

In the first few months following Russia's invasion on February 24, European diplomats and officials worked frantically to hit Russian President Vladimir Putin's allies and industries with sanctions. The bloc’s solidarity in its drive to inflict pressure on Russia's economy — even amid costs at home — amazed even some of the EU’s harshest critics. But… now, as one senior official in an EU country said, the bloc is simply not thinking about sanctions anymore…

“The appetite is weaker,” according to a senior diplomat from an EU country. “It has become more difficult with every single package.”

The long delay to adopting the EU’s oil ban against Russia — and the excruciating process to devise exemptions and compensation for hold-out nations like Hungary — has left bitter memories.

Orbán's move this week was just another reminder of that painful episode. There is also concern about Italy's future position on sanctions once Rome has a new government. Matteo Salvini, the leader of Italy’s far-right League party, has argued Western sanctions against Russia harm Italy and has called on other leaders to rethink their approach.

Overall in Western Europe, sanctions fatigue has kicked in, especially as it becomes harder and harder to find measures that hurt Russia more than they damage the EU economically.

“We’re risking a winter of discontent,” one EU official said, dismissing any talk about new sanctions. “The current energy crisis is making all political leaders nervous because they fear the political consequences. In a lot of countries, this is about the survival of their governments."

The sanctions fatigue is frustrating Ukraine and EU countries that have been leading the charge against Moscow, such as Poland and the Baltics. They have a wide range of suggestions. One is the oil price cap, as discussed within the G7. Other suggestions are more sanctions against cloud services, cryptocurrencies and other technologies. While the campaign from hawkish countries will continue, they may have a long wait. "Nobody wants to talk about more sanctions now," an EU official said to POLITICO.