Politico: “To save NATO, destroy it!” 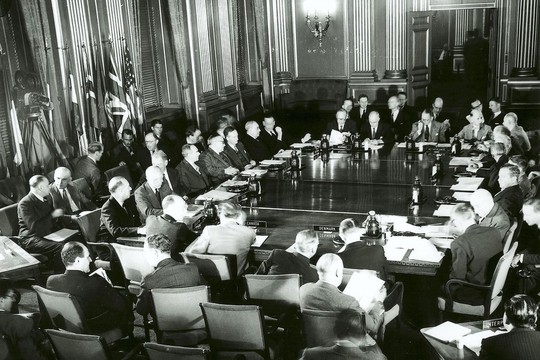 “In military circles, the tactic of “destroying a town to save it” is controversial, but in NATO’s case, there’s no other option (that destroy it – sic?), -writes “Politico” in a new article “To save NATO, destroy it. The transatlantic alliance needs more than a rethink. It needs to be reborn”. Very surprising…

At the close of what leaders across the West billed as a “historic” NATO summit, which included dinners in the Spanish capital’s sumptuous royal palace and the spectacular Prado museum, superlatives were flying fast and furious, - says “Politico”. Look beyond the staged backslapping, bonhomie and self-congratulation in Madrid, however, and one can see that while the alliance’s unity might be a mile wide, it’s also only an inch deep; its collective sense of purpose as varied as its 30 members.

Start with the issue at hand:  the leaders managed to declare Russia — which has been threatening European security — the “most significant and direct threat” to security, peace and stability in the Euro-Atlantic area, (this) is more of a sign that they are masters of the obvious than of grand strategy.

The other signal achievement cited by Stoltenberg was a much-heralded deal to bring in Sweden and Finland. This was less the result of high diplomacy and mutual defense than what might politely be called extortion on the part of Recep Tayyip Erdoğan. The Turkish President held the pair’s accession hostage over his desire to buy new F-16 fighters from the U.S. — and got what he wanted.

Look at the patchwork response to Putin’s war on Ukraine… While some countries — in particular Poland, the Baltics, the U.S. and the United Kingdom – have been particularly generous, others have delivered nowhere near what they could have, especially in terms of tanks and other heavy weaponry.

If Ukraine continues to lose territory and lives because it can’t properly defend itself, responsibility for the failure will lie squarely at NATO’s feet.

Such an outcome wouldn’t bode well for the future of the alliance — especially in Washington, where outside the White House frustration with NATO allies’ overreliance on the U.S. security guarantees remains palpable.

After four years of living in quiet terror under U.S. President Donald Trump, Europeans have lulled themselves into a false sense of security under Joe Biden.

A lifelong Transatlanticist, the U.S. president came into office intent on reversing the more belligerent approach towards allies that marked his predecessor’s tenure. The risk is that Biden, whose prospects for a second term look increasingly shaky, may well end up being more of an outlier on Europe than Trump.

That doesn’t mean that Washington is likely to pull out of NATO, as Trump threatened to. But as the challenges the U.S. faces with China become more acute, the days of coddling European allies will have to come to an end.

Put simply, if members don’t adhere to basic democratic norms, they should be forced out, - insisted “Politico”.

…If there’s not a new page for Western solidarity: “if members don’t adhere to basic democratic norms, they should be forced out” – so what it is?

Such a “pretty” slogan: “To save NATO, destroy it!”

Maybe they do not know what to do in a New World?