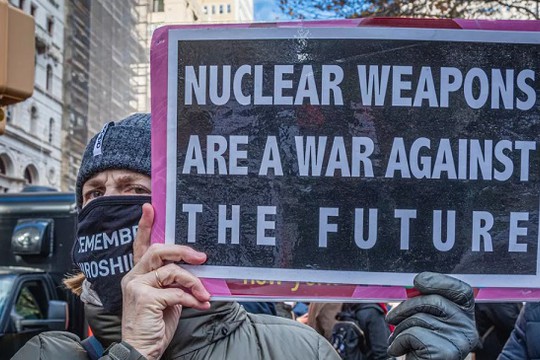 "Anyone paying attention should be worried about the rising dangers of nuclear war, but what we really need is action," said one organizer, informs ‘Common Dreams’, Portland, USA.

Anti-war groups including Peace Action and RootsAction organized picket lines (photo) at the offices of U.S. senators and representatives in more than 40 cities across 20 states, calling on lawmakers to push for a ceasefire in Ukraine, the revival of anti-nuclear treaties the U.S. has exited in recent years, and other legislative actions to prevent nuclear catastrophe.

"Anyone paying attention should be worried about the rising dangers of nuclear war, but what we really need is action," Norman Solomon, co-founder of RootsAction, told ‘Common Dreams’. "Picket lines at so many congressional offices across the country convey that more and more constituents are fed up with the timidity of elected officials, who've refused to acknowledge the extent of the current grave dangers of nuclear war, much less speak out and take action to mitigate those dangers."

The most recent polling released by Reuters/Ipsos on Monday showed that 58% of Americans fear the U.S. is headed toward nuclear war.

"The level of anxiety is something that I haven't seen since the Cuban missile crisis 1962," Peter Kuznick, a history professor and director of the Nuclear Studies Institute at American University, told “The Hill”.

Chris Jackson, senior vice president of Ipsos, told “The Hill” that he didn't "recall any time in the last 20 years where we've seen this sort of level of concern about the potential for nuclear apocalypse."

Pushing the Biden administration to take nuclear weapons off "hair-trigger alert," which enables their rapid launch and "increases the chance of a launch in response to a false alarm," according to Defuse Nuclear War organizers.

"We're sick of members of Congress acting like spectators instead of initiating measures that the U.S. government could take to reduce the terribly real risks of global annihilation," Solomon told ‘Common Dreams’. "The absurdly muted response from members of Congress is intolerable — and it's time to publicly hold their feet to fire."