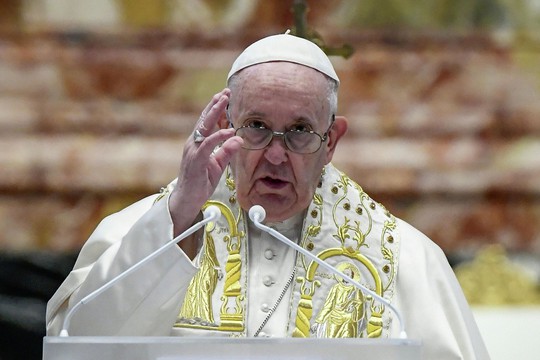 The author of the article Marco Politi in Il Fatto Quotidiano notes that, despite Kiev's pressure, the pontiff refuses to consider Ukraine an innocent victim, and Putin a devil in the flesh, as required in the EU and NATO.

The government in Kiev continues to slowly put pressure on the Vatican. Ukrainian President Zelensky would like the pontiff to come to Kiev, and preferably before the visit to Kazakhstan, which will take place on September 13. Pope Francis has not yet made a decision. He would prefer to visit both Kiev and Moscow to encourage the parties to peace talks. This behind-the-scenes arm wrestling has been going on for several months. The Pope expresses his solidarity with Ukrainians very clearly. He condemned Russia's actions and instructed the cardinals to deliver humanitarian aid and express their regrets to the Ukrainian people.

However, the Argentine pontiff does not adhere to Zelensky's political line. Pope Francis told Patriarch Kirill that he should not be a "servant of Putin," but he himself resolutely refuses to be a "servant of the West." And he clearly stated this in the Vatican daily L'Osservatore Romano. The Vatican believes that Zelensky wants to drag the Pope into a narrative in which Ukraine is presented exclusively as a victim,  Putin as the devil in the flesh and Russia is like a state that needs to be brought to such a state that it will never be able to repeat a military campaign like the one that It began on February 24.

This is a narrative that is promoted in the capitals of NATO and EU countries. And it excludes any analysis of "previous events", that is, the geopolitical changes that led to the conflict. There is no place in it for thinking about the consequences of a total war with a possible nuclear war  for Europe, Asia and the whole world.

Pope Francis does not share this approach. It goes against the current, as well as a large number of countries that make up the majority of the population of our planet and do not want to take the side of Russia or the West. Because for them, the narrative representing an international tragedy as a western movie in which the sheriff and his assistants must destroy a gang of villains sounds unconvincing.

What is happening is a conflict between the West and Russia, and this is how it should be treated. The Pope explicitly stated in June that the "Little Red Riding Hood scheme" should be left aside. It is useless to pretend that in the decades following the collapse of the USSR, NATO did not expand and did not pull the military-political bloc to the borders of Russia. There is no point in hiding the fact that Washington, under George W. Bush, wanted to include Ukraine in NATO. Those were the years when the United States so blindly believed in its omnipotence that it decided that it could capture Afghanistan and Iraq at the same time. In 2008, Ukraine's entry into the alliance was blocked by France and Germany of Angela Merkel, who is still confident that she did the right thing by saying "no". However, this did not cool the expansionist fervor. As Pope Francis said, the West has started "barking at the gates of Russia." They forgot Henry Kissinger's instructions that Ukraine should remain a neutral zone between Russia and the West. As a result, Russia was geopolitically "surrounded and humiliated," as historian Andrea Riccardi said from the very beginning.

But the spell of forgetfulness can be broken. Statements by some representatives of American political and military circles come to help here. "NATO has established itself in the space that belonged to the USSR 30 years ago," said Elbridge Colby, Deputy Assistant Secretary of Defense under the Trump administration, impartially. This in no way justifies Moscow's actions against, to quote Pope Francis, "tortured Ukraine." But the Vatican sees the full picture of what is happening, both from a historical and geopolitical point of view.

After his last telephone conversation with Pope Francis, the Ukrainian president tweeted: "Our people need the support of world spiritual leaders who could convey to the whole world the truth about the terrible actions of the aggressor in Ukraine." This tweet perfectly shows that Pope Francis and Kiev politics are on different sides. The Vatican does not like when the pontiff is told what to do, as well as the fact that the Ukrainian authorities censored the television broadcast of the papal procession, because it expressed the idea of peace between Ukrainians and Russians.