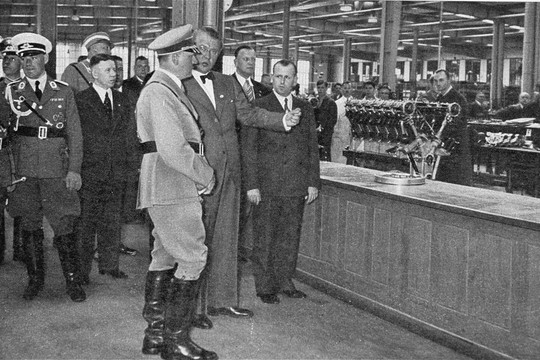 The backbone of Germany’s economy today is the car industry. It’s not just that it accounts for about 10 percent of G.D.P.; brands like Porsche, Mercedes, BMW and Volkswagen are recognized around the world as symbols of German industrial ingenuity and excellence. These companies spend millions on branding and advertising to ensure they are thought of this way. They spend less money and energy on discussing their roots. These corporations can trace their success directly back to Nazis: Ferdinand Porsche persuaded Hitler to put Volkswagen into production. His son, Ferry Porsche, who built up the company, was a voluntary SS officer. Herbert Quandt, who built BMW into what it is today, committed war crimes. So did Friedrich Flick, who came to control Daimler-Benz. Unlike Mr. Quandt, Mr. Flick was convicted at Nuremberg.

This isn’t exactly a secret in modern Germany, but it is happily ignored. These titans of industry, the men who played a central role in building the country’s postwar “economic miracle,” are still widely championed and celebrated for their business acumen, if not their wartime deeds. Their names adorn buildings, foundations and prizes. In a country that is so often praised for its culture of remembrance and contrition, an honest, transparent acknowledgment of the wartime activities of some of Germany’s richest families remains, at best, an afterthought. But until these companies — and Germany — are more open about the Nazi history of their patriarchs, reckoning will remain incomplete.

I’ve been reporting on these families for a decade, first as a reporter for Bloomberg News, then while writing a book about German business dynasties and their Third Reich histories. I’ve pored over hundreds of historical documents and academic studies, as well as many memoirs. I’ve spoken to historians and visited archives across Germany and beyond. And I’ve been shocked by what I learned.

Today, two of the family’s heirs have a net worth of roughly $38 billion, control BMW, Mini and Rolls-Royce, and have significant holdings in the chemical and technology industries. The family’s patriarchs, Günther Quandt and his son Herbert Quandt, were members of the Nazi Party who subjected as many as 57,500 people to forced or slave labor in their factories, producing weapons and batteries for the German war effort. Günther Quandt acquired companies from Jews who were forced to sell their businesses at below market value and from others who had their property seized after Germany occupied their countries. Herbert Quandt helped with at least two such dubious acquisitions and also oversaw the planning, building and dismantling of an uncompleted concentration subcamp in Poland.

After the war ended, the Quandts were “denazified” in a flawed legal process in postwar Germany that saw most Nazi perpetrators get away with their crimes. In 1960, five years after inheriting a fortune from his father, Herbert Quandt saved BMW from bankruptcy. He became the company’s largest shareholder and began restructuring the company. Today, two of his children, Stefan Quandt and Susanne Klatten, are Germany’s wealthiest family, with near-majority control of BMW. The siblings manage their fortunes in a town near Frankfurt from a building named after their grandfather.

The modern-day Quandts can’t claim ignorance of the actions of their father and grandfather. The information above is included in a 2011 study commissioned by the Quandt dynasty four years after a critical TV documentary exposed some of the family’s involvement in the Third Reich. Despite commissioning the study, which was conducted by a historian and a team of researchers, the BMW heirs seem to prefer to move on as though nothing had been learned.

In his sole interview in response to the study’s findings, Stefan Quandt described the family’s distancing from his father and grandfather as necessary but a “massive and painful” conflict. And yet Günther Quandt’s name remains on their headquarters, and Stefan Quandt awards an annual journalism prize named after his father. Stefan Quandt said he believed his father’s “life’s work” justified it.

In the interview, Stefan Quandt said that the family’s most important goals in commissioning the study were “openness and transparency.” But for another decade, the website of the Herbert Quandt Media Prize featured a biography of its namesake that made no mention of his activities during the Nazi era, except for saying he joined the board of his father’s battery company in 1940.

That changed only in late October 2021. It was more than a decade after the study was produced but conspicuously only a few months after I had asked the family a question about it. Today an expanded biography mentions part of the study’s findings, such as Herbert Quandt’s responsibility for staffing at battery factories in Berlin where forced and slave laborers were exploited. But it still omits Herbert Quandt’s involvement in the concentration subcamp project, his use of prisoners of war at his private estate and his help acquiring companies seized from Jews.

BMW and its controlling shareholders, Mr. Quandt and Ms. Klatten, aren’t unique in their revisionism. In 2019 the Ferry Porsche Foundation announced that it would endow Germany’s first professorship of corporate history at the University of Stuttgart. The Porsche company established the foundation in 2018, 70 years after Ferry Porsche designed his first sports car. “Dealing with one’s own history is a full-time commitment,” the charity’s chairman wrote in a statement. “It is precisely this critical reflection that the Ferry Porsche Foundation wants to encourage, because: to know where you’re going, you have to know where you’ve come from.”

He could have started closer to home. The foundation is named after a man who voluntarily applied to the SS in 1938, was admitted as an officer in 1941 and lied about this for the rest of his life. During most of the war, Mr. Porsche was busy leading the Porsche company in Stuttgart, which exploited hundreds of coerced workers. As Porsche’s chief executive in the postwar decades, he surrounded himself with former high-ranking SS officers.

In his 1976 autobiography, Mr. Porsche gave a twisted historical account, full of antisemitic statements, about Porsche’s Jewish co-founder, Adolf Rosenberger. He even accused Mr.Rosenberger of extortion after he was forced to flee Nazi Germany. The truth was that in 1935, Ferry Porsche received Mr. Rosenberger’s company shares after his father, Ferdinand Porsche, and brother-in-law, Anton Piëch, bought the co-founder out of the company, paying far below market value for his shares.

Today Porsche doesn’t just sponsor professorships or make sports cars. Together with their cousins the Piëchs, the Porsches control the Volkswagen Group, which includes Audi, Bentley, Lamborghini, Seat, Skoda and Volkswagen. The combined net worth of the Porsche-Piëch clan is estimated at around $20 billion. They are now preparing to spin Porsche off from the Volkswagen Group and list the sports car company in what is shaping up to be one of the largest initial public offerings of 2022.

The Porsches have never publicly addressed the activities of their patriarchs during the Third Reich. And it wasn’t only Ferry Porsche who was implicated: Ferdinand Porsche, who designed the Volkswagen, during the war ran the Volkswagen factory with Mr. Piëch. There, tens of thousands of people were used as forced and slave laborers to mass-produce weapons.

The Ferry Porsche Foundation endowed the professorship at the University of Stuttgart because members of its history department published a company-funded study in 2017 about the Porsche company’s origins in the Nazi era. But the study seemed to leave a lot out: Somehow none of Mr. Rosenberger’s personal papers were included in the research. The study also mischaracterized the nature of Mr. Rosenberger’s share sale. The more I looked at the study, the more it began to look more like a partial whitewash than a full accounting.

Then there are the Flicks. Friedrich Flick controlled one of Germany’s largest steel, coal and arms conglomerates during the Third Reich. In 1947 he was sentenced to seven years in prison for war crimes and crimes against humanity. At his Nuremberg trial, he was found guilty of using forced and slave labor, financially supporting the SS and looting a steel factory. After his early release in 1950, he rebuilt his conglomerate and became the controlling shareholder of Daimler-Benz, then Germany’s largest carmaker. In 1985, Deutsche Bank bought the Flick conglomerate, making his descendants billionaires.

Today a branch of the Flick dynasty worth about $4 billion maintains a private foundation in Düsseldorf named after their patriarch. The foundation — which has a seat on a board of one of Germany’s most prestigious universities and directs money to educational, medical and cultural causes, primarily in Germany and Austria — is still named after a convicted Nazi war criminal in whose factories and mines tens of thousands of people worked in forced or slave labor, including thousands of Jews. But looking at the foundation’s website, you would never learn of the Flick fortune’s tainted past.

How can it be that three of Germany’s most powerful business families, their companies and their charities are so out of step with the country’s lauded remembrance culture?

When I asked Jörg Appelhans, the longtime spokesman for Stefan Quandt and Ms. Klatten, about their use of their grandfather’s and father’s name on their headquarters and media prize, he sent me an email saying, “We don’t believe that renaming streets, places or institutions is a responsible way to deal with historic figures” because doing so “prevents a conscious exposure to their role in history and instead fosters its neglect.”

This is an especially shameless contortion. These families aren’t showing the bloody history behind their fortunes except, sometimes, in commissioned studies written in dense academic German whose findings they then leave out when describing their family history online. They aren’t even dealing with them in an honest fashion. They are, in fact, doing the opposite: commemorating their patriarchs without mentioning their Nazi-era activities.

For decades, remembrance culture has been a central component of German society. Across German cities and villages, you’ll find Stolpersteine, the brass-and-concrete cubes with the names and life dates of victims of Nazi persecution. Memorials, big and small, are everywhere. In cafes from Berlin to Frankfurt and from Hamburg to Munich, there are daily conversations about collective guilt and atonement. These are reflective, nuanced and, above all, aware.

Yet this movement toward facing the past is somehow bypassing many of Germany’s most revered tycoons and their dark histories. The more time I spent learning about these business dynasties, their tainted pasts, fortunes and companies, and their desire to ignore or cover up how involved their patriarchs were with the Third Reich, the more I began to doubt how deep, sincere and lasting this culture of remembrance in Germany really is.

The car industry is quintessentially German, so very central to not just the country’s economy but also its identity. Would a repudiation of these tycoons be a disavowal of national identity? Do these men need to be championed because they remain potent symbols of Germany’s resurgence and economic might? Does celebrating business success still matter more in Germany than acknowledging crimes against humanity? Or is the real answer something simpler: Perhaps the country is beholden to a few billionaires and their global companies who care more about protecting their reputations — and their fortunes — than about facing up to the past.

They Are the Heirs of Nazi Fortunes, and They Aren’t Apologizing