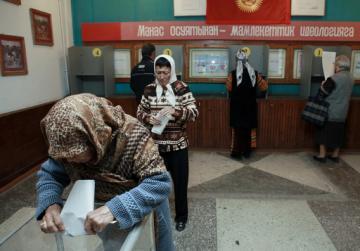 Finally, the parliamentary elections in Kyrgyzstan to which the republic exhausted by the permanent crisis and craving for at least some sort of stability was inching so nervously are over. Contrary to alarmist forecasts, they neither were accompanied by another round of public unrest nor provoked clashes like those Kyrgyzstan's south was shattered by last July. There is consensus among the Kyrgyz parties and watchers that the elections were for the most part fair, occasionally prompting optimists to talk about “the first genuine democracy in Central Asia”. Serious questions do arise in connection with the openness to dialog of the parties which earned entry tickets to the parliament and with their ability to exercise governance in a more or less harmonized mode. Moreover, it is not entirely clear at the moment whether Kyrgyzstan is going to retain the system of parliamentary rule in the nearest future.

Perhaps the most striking feature of the recent campaign in Kyrgyzstan was the unprecedented number of parties in the race – a total of 29 of them competed over the parliament's 129 seats. The proliferation of political parties reflected the structure of the Kyrgyz society which tends to function as a conglomerate of  regional clans. Careful scrutiny reveals that the majority of Kyrgyzstan's parties are either kinship-based or community-based.

The turnout was notably sluggish as only 55% of Kyrgyzstan's constituency of 2,853,000 chose to come to the poll stations, and the victory is generally credited to the opposition parties. Five parties – Ata Zhurt (8.89%), the Social Democratic Party of Kyrgyzstan (8.04%), Ar Namys (7.74%), Respublika (7.24%), and Ata-Meken (5.6%) surmounted the 5% barrier on the way to parliament. The score of Butun Kyrgyzstan fell a fraction of a per cent short of the required minimal result.

The campaign frontrunner  - the oppositional Ata Zhurt – is run by veterans of the administration of Kyrgyzstan's ousted president Kurmanbek Bakiyev. On the eve of the elections its leader, former emergency ministry chief Kamchybek Tashiev pledged to tailor the Kyrgyz constitution so as to switch the republic back to the  presidential rule and nothing less than to reinstate the toppled Bakiyev. He also stated in a notorious interview last September that the Kyrgyz people as the republic's title nation cannot accept a standing inferior to anybody else's in the country and that collapse awaits Kyrgyzstan's statehood if any other of the republic's nations – Russians, Uzbeks, Turks, or Chinese – claim a status equal or superior to that of the Kyrgyz. Obviously, the message resonated with many of the voters and attracted the largest segment of the electorate to Ata Zhurt.

The performance of Felix Kulov's Ar Namys which posted the third result in the elections is attributed to Russia's manifest support for the party. Russian President D. Medvedev received F. Kulov in Moscow in the run-up to the elections and the meeting grabbed the headlines in Russian media. As German expert on Central Asian affairs Michael Laubsch remarked, the success of Ar Namys demonstrated the enduring grip of the Russian media on the Kyrgyz audience and – from a broader perspective - highlighted the extent of Russia's influence over the republic's population.

Kyrgyz analysts stress that the elections generally successful for the opposition fetched the best results to the parties focused on representing Kyrgyzstan's southern regions. This is mainly true of Ata Zhurt which, unlike the northerners dominating the Kyrgyz interim government, managed to maintain unity in the ranks of its supporters.

Director of the Institute for Strategic Analysis and Assessment under the President of the Kyrgyz Republic Sergey Masaulov said the Kyrgyz parliament would be confronted with a choice between three potential coalitions. The first one is the alliance of the Social Democratic Party, Ar Namys, and Respublika, the second – of the Social Democratic Party, Respublika, and Ata-Meken, and the third -  of Ata Zhurt, Respublika, and Ar Namys. While the first and the second configurations should be acceptable to the current Kyrgyz administration, the third – as the one giving Ata Zhurt the top role – clearly is not. Ata Zhurt's leadership is prone not only with reversion to the presidential rule, which is the party's staple, but also with a comeback of the entire Bakiyev clan.

Daniyar Karimov, a commentator with the 24.kg media outlet, presented a curious survey of the potential parliamentary coalitions in Kyrgyzstan. In his view, four of the five parties that made it to the parliament - Ata Zhurt, Ar Namys, the social democrats, and Respublika – sold themselves as pro-Russian, two -  Ata Zhurt and Ar Namys – rolled out agendas including return to the  presidential rule, and three - Ata Zhurt, Ar Namys, and  Respublika – are opponents of the current Kyrgyz administration. The truth, however, is that the  coalition-building which looms ahead is going to be defined by personal transactions among party leaders more than by the parties' stated programs. In the light of the above, partnership between Ar Namys and the Social Democratic Party seems unlikely and the fact that the leader of the social democrats is at odds with Ata Zhurt should also be taken into account. Kyrgyz political analyst Toktogul Kakchekeev projects that Kyrgyzstan's new parliament will be carved up by a northern and a southern coalition  considering that the shadows of former Kyrgyz presidents Askar Akayev and Kurmanbek Bakiyev can be discerned behind some of the parties that won the recent elections.