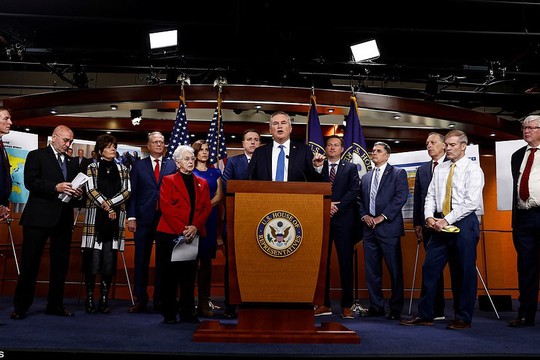 Rep. James Comer led the press conference Thursday, where he made clear that the  president himself was the target of the House GOP's probe.

Republicans announced that they are launching an investigation that will focus on President Biden himself and any illicit or unethical financial ties he had to his son Hunter's overseas dealings, writes “The Daily Mail”.

Now Joe Biden and his family are facing an onslaught of subpoenas from the House majority members, who say they know where the proverbial bodies are buried.

Rep. James Comer led the press conference, where he made clear that the president himself was the target of the House GOP's probe. He is a ranking member of the House Oversight Committee, will have the power to issue legally-backed demands for documents, information and testimony once the 188th Congress begins on January 3.

The congressman laid out his plans to use that power to go after the Bidens for alleged wire fraud, tax evasion, money laundering, illegal foreign lobbying and defrauding the government.

The evidence Comer is currently combing through, and is seeking to claw via subpoena, could ultimately result in articles of impeachment for the president and prison for the First Son.

Comer is also asking the Treasury for copies of more than 150 suspicious activity reports (SARs) involving the Bidens, filed by banks under anti-financial crime laws, that could be key to tracing the flows of foreign funds to the family's coffers.

Amid all the shocking messages involving Joe Biden, possibly the most important email of the 154,000 on Hunter's abandoned laptop is the infamous 'big guy' email, suggesting that the president was secretly involved in, and set to profit from, an alleged Chinese influence operation.

In total Joe met with fifteen of Hunter's business associates according to White House visitor logs and records from the First Son's laptop.

Emails on Hunter's abandoned laptop published by DailyMail.com show that Hunter and Joe paid each other's bills, and Hunter's business partner Eric Schwerin did Joe's taxes and visited the then-VP at the White House at least 27 times.

Joe also hosted Hunter's best friend, business partner and now convicted fraudster Devon Archer at the White House just days before Archer and Hunter were appointed to the Burisma board (Ukraine) in 2014.

Archer was entertained at the West Wing on April 16 2014 according to visitor logs. Joe traveled to Kiev five days later on April 21. The next day, Archer joined the Ukrainian gas company’s board. On April 28, British officials froze $23million in accounts belonging to Burisma owner Mykola Zlochevsky, accusing him of fraud. The following month Hunter also joined the gas firm’s board.