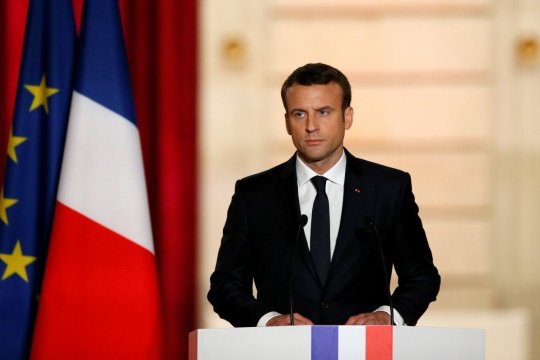 In the run-up to the G7 Summit in Biarritz, French media reports focused on the global political and diplomatic plans of President Emmanuel Macron. Journalists say that for President Macron the G7 summit presented a unique opportunity “to return France its historical role of a “ mediator ”in global conflicts and to contribute to outlining a new geopolitical agenda"[i]. How realistic are such ambitions?

France acquired the tradition of demonstrating its sovereign and special international status in the times of Charles de Gaulle. Paris also succeeded in  securing effective mediation in various conflicts under Francois Mitterrand and Nicolas Sarkozy. Playing into Paris’ hands is the nuclear arsenal, the status of a permanent member of the UN Security Council,  and one of the leading roles in the global arms market. France’s mediation efforts have won perhaps the greatest trust among the Western powers. In the past, France was able to speak on behalf of united Europe, while Macron has repeatedly signalled his determination to consolidate the EU foreign policy.

The EU itself has long been showing a "tendency to strengthen its role as a major player in global crisis management." But in order to expand diplomatic and humanitarian mediation efforts under the patronage of the EU one should follow the current format of making foreign policy decisions within the community, which requires the consensus among all the participants. Thus, to guarantee the agenda and the role claimed by President Macron it is essential to reconsider foreign policy priorities and probably reform the institutions of united Europe. It is also necessary to consolidate and coordinate the increasingly “mosaic” and diverse interests of member states, which are regularly at odds with one another even on issues that are declared by the EU leadership as being of top priority for all member countries. A long-term geopolitical strategy continues to play a significant role too, as a result of which the development of a pan-European foreign policy turns into a frantic search for the “lowest common denominator”.

In the meantime, Macron’s “mediation” on a number of priority issues  has been mostly about defending the interests of France. The second half of last year was marked by relations between the two “locomotives” of the EU - France and Germany – hitting a new level. However, the beginning of February this year saw serious disagreements between the two parties. As it turned out, the interests of Paris and Berlin clash. Regarding the construction of the Nord Stream-2 gas pipeline, France managed to impose on Germany “the format that the German government wanted to avoid.” [ii] On the issue of transatlantic trade, the French position blocked the start of negotiations with the US, which was fraught with the introduction of duties against German-made products, in the first place. The EU members managed to overcome this discord only by mid-April. Finally, this summer, after a fierce backstage fight, in which Macron took center-stage, a “compromise” was reached in favor of France. The posts of presidents of the European Commission and the European Central Bank went to candidates who are politically dependent on Paris. This so-called realpolitik inevitably raises the question of whether Macron with his geopolitical ambitions might push Europe to an even greater internal split? In this regard, there have been suspicions that the French president wants to turn the EU countries into an instrument of Paris’s foreign policy agenda.

Some experts believe that Macron’s ambitions are great beyond description, that "his horizon is the future balance of strength in the world." They talk about his determination to “go beyond European and Atlantic solidarity and return to the concept of multipolarity and multilateralism”. The Champs Elysees seeks to maintain a regular dialogue even with powers whose interests run counter to Western ones; and even with countries that oppose the allies of France. At the same time, Macron is committed to NATO and “is seeking to rely on the concerted effort of the North Atlantic Alliance” in a hope to give the organization a “new impetus” [iii]. In addition, Macron’s foreign policy follows clear “ideological principles,” which make his supporters look to him with double hope, while opponents see him as the main obstacle to effective diplomacy. All this restricts his “independence” and the possibility of new agreements.

Finally, many analysts say that Macron’s foreign policy is characterized by controversy. A few days ago he said that he wanted to turn France into a "power of equilibrium." But just a year ago, he demonstrated strong support for the German idea of transforming the entire European Union into a balancer, “balancing” the international situation. What is closer to Macron, the “individual leadership” of France or the “sovereignty of Europe”? Over the previous two years, being at the top of power, he has significantly changed his views on the transatlantic model of globalism and signaled the need to give a new role to Europe, to "strengthen" its position in the new alignment of forces. A year ago, Macron urged the EU to “guarantee its own security”, since such powers as China and the United States hardly see Europe as an equal force. And if the Europeans fail to quickly change this state of things, then “we are in for a bleak future” [iv]. On August 27 this year, as he spoke at a meeting of ambassadors, Macron stated: “we are witnessing the end of Western hegemony in the world,” ... “new powers are coming to the fore”, primarily Russia and China.” [v]. In this regard, it is important to understand what is behind the frequent change in rhetoric of the current French leader, adaptability of a far-seeing strategist or a time-serving pragmatism of a politician whose major concern is the next elections.

Meanwhile, the mediatory efforts undertaken by Macron while getting ready and holding the G-7 summit were also filled with striking discrepancies. The participants failed to work out a “model” on the Iranian dossier, although the  media had reported a statement by the French president on reaching an agreement on “joint communication” on maintaining a nuclear deal with Tehran. However, it soon became clear that Paris is in no position to influence the United States. [vi] In the Russian direction, Macron yet again tried to “entice” Moscow by the narrative about “Europe from Lisbon to Vladivostok.” However, Russia remembers that a little over a year ago Macron spoke as confidently about it as being “non-Europe”, thereby suggesting conflicting trends in international relations - the “Big Seven” is more and more like a relic of the past”,  and a return to this past in its “current format makes no sense” [vii].

What inspires some optimism is the fact that Macron seems to understand that Russia is not the country that can be "excluded from all parties." The broader its cooperation with Moscow, the fewer problems the West will face. Addressing the French ambassadors during a meeting mentioned above, the French president made it clear “that France needs to reconsider and build new relations with Russia.” But one of the many puzzles he has to solve along the way is the “paradoxical situation” that has developed to date, “when the same countries within NATO and the European Union support opposite political platforms regarding Russia.” As part of the NATO agenda, Europeans are pursuing a policy that combines  a “systematic (military-political) deterrence of Russia” with the need to maintain dialogue, despite the fact that all formal options for such a dialogue are frozen. As part of its own agenda, the European Union, whose 22 members are also members of NATO, terminated a “systematic political dialogue” with Moscow, based on the Partnership and Cooperation Agreement, in 2014. At the same time, there are statements about the expediency of selective cooperation - in issues that meet the interests of the EU. “How is it possible to develop selective cooperation without political dialogue?  How is this possible without coordination of mutual interests?”[viii] - an expert from the Institute of Europe of the Russian Academy of Sciences asks.

Meanwhile, the world is in acute need for "global legal standards", and not only for the regulation of traditional "conflict-use of force" challenges. Issues such as climate change, threats to destabilize cyberspace, attacks on informational reality, cross-border social disasters, pandemics cannot be handled effectively at the level of individual states. More and more issues enter “the world level”. And if we are to address them, we need the appropriate “world order”, the harmonization of universal norms so that national governments could work together to “secure effective global governance” [ix].

Russia welcomes and is actively participating in transforming international relations in the direction of "multilateral diplomacy", "collective efforts at the level of the international community and the regions." However, are the West as a whole, and France, in particular, ready for “restraint and compliance with the international law and order”, for “working in an open format”, and for abandoning the “ideology-dominated foreign policy”? Are they ready that the new model of diplomacy will be “complex and multifaceted,” sometimes fitting badly if at all into any previous formats in terms of the approaches that will be adopted by all participants. [x] For example, in the case of the “Big Seven,” Moscow suggests looking at the situation from a broader perspective and discuss the prospects for the Group’s modernization not only through the return of Russia, but also through expansion to include India and China. This transformation into the “Big Ten” may become “a powerful phenomenon in global politics that would change directions, approaches and formats” [xi].

Emmanuel Macron is thus to provide the answers to a large number of difficult questions: to what extent can France be independent in determining its foreign policy? Also, is it possible to effectively play the role of an “intermediary power”, while remaining bound by the “strict obligations to other players”? And wouldn’t it be possible for France, in that case, to find itself squeezed between the “hammer” of the everyday realities of modern international politics and the “anvil” of the maxim, which they say belongs to the French, that genuine realists “demand the impossible”?