President Medvedev`s Visit to Kyiv: the First Set of Results 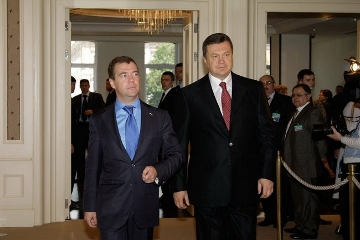 No doubt, it is the economic cooperation that will reenergize broader relations between Russia and Ukraine.

One of the key economic agreements between the two countries signed during the Russian-Ukrainian summit is the inter-bank cooperation deal between Ukreximbank and Russia`s Bank VTB. Previously Russian Prime Minister V. Putin promised to Kyiv a $500m credit program from VTB to lessen Ukraine`s dependency on Western financial institutions.

In the energy sector, the proposal to merge Russia`s Gazprom and Ukraine`s Naftogaz hypothetically remains on the table. The Russian and Ukrainian Prime Ministers have recently reached a preliminary agreement clearing the way for Russia`s investments in the reconstruction and upgrade of the Ukrainian gas transit network. President Medvedev reiterated that ample opportunities exist for the agricultural cooperation between Russia and Ukraine. In the nearest future the governments of the two countries will likely revive the negotiations on Ukraine`s joining the Russia-Kazakhstan grain pool, the plan formerly rejected by Kyiv under Western pressure.

Presidents Medvedev and Yanukovych discussed prospects for the partnership between Russia and Ukraine in the aerospace industry. Russia`s United Aircraft Corporation and Ukraine`s Antonov aircraft manufacturer are planning joined projects to build the AN-140 and AN-148 – and subsequently the AN-70 and An-124 – aircrafts.

In the ship-building sector, the cooperation between Russia and Ukraine in the nearest future is going to be centered around project 1164 aimed at constructing the Ukraine cruiser. Though the ship is 95% ready at the moment, Russia`s assistance is indispensable for putting the finishing touches to the project.

A number of joint regional projects are also going to be launched by Russia and Ukraine. A broad Moscow-Sevastopol cooperation program has been unveiled, and Russia`s Olympstroy state corporation intends to offer jobs to Ukrainian citizens at the construction of facilities for the 2014 Olympic Games in Sochi.

The Russian-Ukrainian inter-governmental agreement on the use and development of the GLONASS satellite navigation system is a significant result of the summit. For Ukraine, joining the GLONASS project provides an opportunity to reanimate its research institutions and high-tech sector.

The extension of the Sevastopol naval base lease held by Russia`s Black Sea Navy marked substantial progress in the relations between Russia and Ukraine, and several additional agreements were reached that would boost the cooperation between the two countries in international politics. Moscow and Kyiv also signed a border demarcation agreement.

Presidents Medvedev and Yanukovych issued three joint international politics declarations during the summit. In a declaration on the European security, Russia and Ukraine stated that the world needs a maximally inclusive security arrangement spanning the area from Vladivostok to Vancouver and pledged to jointly advance the Russian President`s initiative aimed at signing the European Security Treaty.

The declaration on the resolution of the conflict in Transdnistria showed that Russia and Ukraine are adopting coordinated positions on the issue and intend to take a bigger role in defusing the crisis. The declaration on the security in the Black Sea region should serve as the basis for the cooperation between the Russian and Ukrainian navies.

The rapprochement between Russia and Ukraine prompted an outpouring of criticism in Western media. The strengthening of the two countries` ties thanks to the successful Medvedev-Yanukovych summit has been described as Russia`s attempt to draw Ukraine into its orbit (El Pais) and as a reflection of “the Kremlin`s imperial logic” (RFI). Former US Ambassador to Ukraine W. Taylor even said Washington is vigilant to ensure that the achievements in relations between Moscow and Kiev do not jeopardize the sovereignty of Ukraine.

1.The economy theme is going to dominate the Russian-Ukrainian agenda in the foreseeable future.

2.The cooperation between the two countries in the aerospace industry, regional projects, and infrastructure development will certainly get a boost from the summit.

3.Russia and Ukraine have shown determination to jointly start playing a more active role in the Black Sea region and generally in East Europe.

The West`s displeasure at the intensification of the cooperation between Russia and Ukraine is likely to translate into attempts to discredit the process or to offer Kyiv alternatives such as cheap credits, economic aid, or political stimuli as rewards for switching to a more pro-Western course.