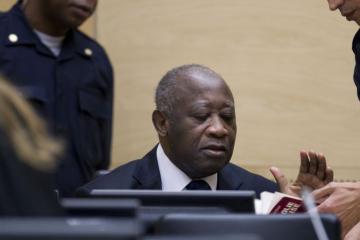 President of Côte d'Ivoire Laurent Gbagbo who had been displaced  as a result of the French intervention appeared before the International Criminal Court (ICC) in Hague on December 5. With several other country leaders already facing ICC charges, the fresh case could fit into a steady trend apart from a significant circumstance – unprecedentedly, Gbagbo was taken into custody based on a secret indictment. In contrast, indictments were released prior to all previous ICC probes. It became known recently that an arrest warrant for Gbagbo had been issued already on November 23, but the ousted president of Côte d'Ivoire was extradited to the Hague only on November 30 despite having been held in his home country for over nine months.

Gbagbo faced the ICC pre-trial chamber headed by Argentinian judge Silvia Fernandez de Gurmendi. The panel also includes Elizabeth Odio Benito from Costa Rica, the country's former vice president who also served as a judge with the International Criminal Tribunal for the former Yugoslavia, and Adrian Fulford from Great Britain. Asked about his living conditions in custody, Gbagbo replied that the conditions were decent but stressed that the circumstances of his arrest had been abnormal. He said he was seized under fire from French tanks, with the shellings continuing for weeks, a death toll rising, and the presidential palace being left in ruins. Gbagbo also mentioned witnessing how his government's minister of the interior was killed. Gbagbo's account of his transfer to the Hague similarly highlighted the legal irregularities abundantly present in  the case.

According to the arrest warrant, Gbagbo is charged with  crimes against humanity - murder, rape and other forms of sexual violence, persecution, and other inhuman acts – related to the conflict which erupted in Côte d'Ivoire in the wake of the disputed November, 2010 elections. The charges do not imply that the crimes were personally perpetrated by Gbagbo – the responsibility for them is supposed to lie with his defense and security forces along with pro-presidential youth militias and mercenaries who operated across Côte d'Ivoire1.

The arguments submitted by the ICC prosecutor to the pre-trial chamber as the motivation behind the inquiry actually show what level of objectivity can be expected in future. His description of the developments in Côte d'Ivoire reads: “On 2 December, the Chair of the Independent Electoral Commission announced the provisional results of the second round of the presidential elections, declaring that Alassane Ouattara had garnered 54.1 per cent of the votes, and Laurent Gbagbo 45.9 per cent. Later that day, the President of the Constitutional Council, overturned the decision of the Independent Electoral Commission and declared Gbagbo victorious. Soon after, the two candidates simultaneously declared themselves President of Côte d’Ivoire. Ouattara was quickly backed by the international community as the sole legitimate president...Despite the repeated and sustained mediation efforts of the international community, Laurent Gbagbo refused to relinquish power. On 11 April, following military operations conducted by forces loyal to President Alassane Ouattara, backed by UNOCI and French Licorne troops, Laurent Gbagbo was arrested and placed in the custody of President Ouattara’s Government”2. The prosecution thus deceives the Court into believing that Ouattara was the country's legitimate president. The key point here is not even that, judging by the text, the international community's backing appears to be among the criteria of legitimacy of a claim to presidency. The prosecutor obviously equates the verdict of the Independent Electoral Commission in favor of a presidential candidate to the legitimacy of his presidency, though in fact the constitution of Côte d'Ivoire gives the constitutional council, not the electoral commission, the authority to rule who won the race if the elections outcome is called into question. In other words, the prosecutor chose to conceal from the court the information that should cast a different light on the legal aspect of the events in Côte d'Ivoire and on the status of the accused. It has to be realized that Gbagbo, not Ouattara, is the legitimate president of Côte d'Ivoire according to the country's constitution.

Interestingly, Côte d'Ivoire recognized the ICC jurisdiction under Gbagbo when, on April 18, 2003, the country's foreign minister signed a declaration pledging full cooperation with the court. Gbagbo's administration made a huge mistake in the process by allowing the jurisdiction to apply to unspecified crimes and without any kind of a time framework: the declaration simply said the country would cooperate in investigating crimes committed on the territory of Côte d'Ivoire after September 19, 20023. Côte d'Ivoire became dependent on the ICC as a result of the recognition granted on such loosely defined terms as it gave the Court unlimited freedom to decide whom and over what to to put on trial. For seven years – from 2003 till 2011 - the ICC stayed indifferent to the situation within its expanded jurisdiction to carry out a snap investigation in a matter of weeks when Côte d'Ivoire's legitimate president was forcibly removed and an IMF protégé - installed.

The countries recently enthusiastic about international justice – especially the African countries which naively expected justice from “the white people's Court” and rushed to ratify  and enact the ICC statute – will likely draw a serious lesson from the Gbagbo case.