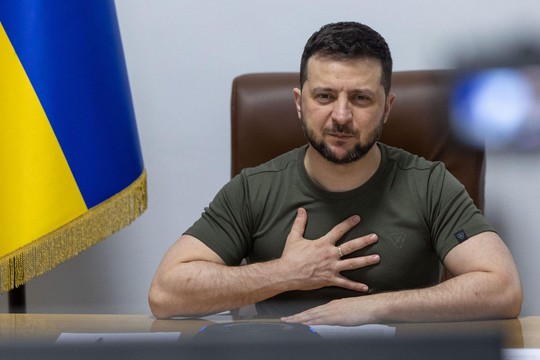 Ukraine cannot be trusted to abide by Washington’s wishes and not use U.S.-supplied rocket launchers against targets in Russia, Kremlin spokesman Dmitry Peskov said on June 1st.

Kiev has a poor record on keeping its word, the official claimed. Peskov was commenting on the U.S. decision to provide Ukraine with HIMRAS multiple rocket launchers. U.S. officials stated that the weapon systems would not be used against targets in Russia, arguing that this made Washington not a party to the Ukraine conflict.

When asked about the promise, Peskov said Russia didn’t trust Zelensky to keep his word. Zelensky has been breaking his word throughout his relatively short political career, “starting with his main election campaign promise to put an end to the war in southeastern Ukraine,” Peskov clarified.

The Ukrainian ombudsperson, Lyudmila Denisova, has been removed from her post over spreading ‘fakes’ about Russian forces. The official has been accused of failing to perform her duties and in particular of spreading unverified information. Such actions only served to tarnish Ukraine’s image, MPs have argued. The ombudsperson had “hardly exercised her powers to organize humanitarian corridors” or prisoner exchanges, a Ukrainian MP, Pavel Frolov said. He criticized her for spending most of her time abroad as the conflict unfolded.

Situation on the battlefields

Cowardly avoiding combat engagements with the united Russian and Donbass troops, the AFU and nationalist units continue shelling residential and social infrastructure areas in Donbass by using heavy artillery and MLRS, including the U.S. M777 howitzers that arrived near the DPR and the LPR.

During last four months, AFU units fired 36,000 shells and missiles at civilians living in Donbass. They killed 136 civilians there, including children.

What could happen with the citizens of Donbass, if Russia decided in February 24th, 2022 not to protect them from the third Ukrainian aggression?

Operational-tactical, army and unmanned aviation have hit 15 areas of Ukrainian manpower and military equipment concentration. Ammunition and fuel depots of the Ukrainian Armed Forces near Dolina and Slavyansk, Donetsk People's Republic have been destroyed.

The attacks have resulted in the elimination of up to 240 nationalists and up to 39 weapons and military equipment, including one Osa-AKM anti-aircraft missile system, 10 tanks and infantry fighting vehicles, 3 BM-21 Grad multiple rocket launchers, 7 artillery mounts and mortars, and 17 special vehicles.

Missile troops and artillery have hit 131 command posts, 146 artillery and mortar batteries at firing positions, as well as 579 areas of AFU manpower and military equipment concentration.

More and more Ukrainian GIs declare that they are not going to fight any more. They claim that they do not have enough food, reinforcements, weapons and professional commanders. Nearly 16,000 Ukrainian troops are trapped in a combat cauldron in the area close to Donbass.

The fate of foreign mercenaries in Ukraine

The overall number of foreign mercenaries to Ukraine to take part in combat operations against the Russian Armed Forces has virtually dried up since the beginning of May.

According to the data available by the Russian MoD, the total number of foreign mercenaries in Ukraine has now been almost halved from 6,600 to 3,500. At the same time, the number of mercenaries in combat units of the Armed Forces of Ukraine (AFU) and National Guard in Donbass occupied by them has decreased considerably.

Hundreds of foreign mercenaries in Ukraine were eliminated by Russian long-range precision weapons shortly after their arrival while they were undergoing pre-training and assembled into tactical groups. Most of the mercenaries lost their lives in the combat areas due to their low level of training and lack of combat experience.

The commanders of the Ukrainian Armed Forces and National Guard units, which included foreign mercenaries, are not sparing them in their efforts to reduce losses amongst their Ukrainian servicemen. Captured mercenaries tell interrogators that they are the first to be sacrificed. Due to the Kiev regime's silencing of the losses and the absence of remains, relatives of the mercenaries in their countries of residence simply do not know about their deaths.

Faced with a real combat situation and heavy losses among servicemen of the AFU, the National Guard and foreign ‘soldiers of fortune’, a significant number of mercenaries prefer to leave Ukrainian territory as soon as possible, but the Kiev regime prevents them from going abroad in every possible way.

The Kiev regime's urgent attempts to guarantee the mercenaries legal protection by including them in the military units of the AFU or the National Guard, or by illegally issuing them current Ukrainian passports, will not save any of them from criminal tribunal.

Russia realizes that under international humanitarian law, foreign mercenaries arrested in Ukraine are not and will be not considered as combatants and the best option for them is criminal liability.

Situation at the Black and the Azov Seas

70 foreign vessels from 16 countries remain blocked in 6 Ukrainian ports (Kherson, Nikolaev, Chernomorsk, Ochakov, Odessa and Yuzhniy). The threat of shelling and high mine danger posed by official Kiev that deployed them prevents vessels from entering the high seas unhindered. The danger to navigation from Ukrainian mines drifting off their anchors along the coasts of the Black Sea states remains.

The Russian Armed Forces have created conditions for the operation of two maritime ‘blue-water’ humanitarian corridors, which are safe lanes for ships:

b) in the Sea of Azov, to leave Mariupol port 115 miles long and 2 miles wide towards the Black Sea.