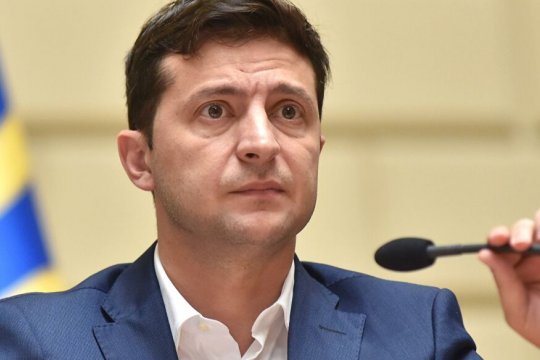 President Zelensky’s course is levelling off – it is evolving to match the "traditional Ukrainian reality." However, Zelensky started his presidency by swimming against the current, which became clear from his election statements.

From the very outset, the voices of those who believed in him, who admired the novelty of his program, were louder than those of the skeptics. This was because Zelensky did inspire a hope which was essential for most Ukrainians, so tired of economic problems, of the conflict in the southeast and the never-ending hysteria on the Ukrainian political scene.

In order to secure implementation of all the declared changes in foreign policy, which focused, first of all, on the pursuit of the Minsk Agreements, Zelensky had to go against the nationalist mainstream in the country, as well as against the policy of his Western sponsors regarding Russia.

Consequently, we can assume that while making high-profile promises to settle the conflict in the Donbass, to “reintegrate the Donbass”, Zelensky knew only too well that in the conditions of Ukrainian political reality the only thing he could achieve was a truce and an exchange of prisoners. Although we cannot rule out political romanticism and lack of experience, which inspired hopes for more.

In September 2019, it became clear that Zelensky was determined not to ignore the Minsk Agreements, like his predecessor, Petro Poroshenko, who, nevertheless, had signed these agreements, but to revise them. It was this revision that the efforts of the Ukrainian side in the contact group were set on at meetings of political advisers to the heads of state of the Normandy Four. At first, Zelensky mentioned the "Steinmeier Formula", then came the "Zelensky Formula", which was not articulated properly. [i]

The much-anticipated meeting of the Normandy Four in December 2019 was approached by Zelensky with a rhetoric which was based not so much on the rejection of the “Steinmeier Formula” as on the revision of the Minsk Agreements. In the course of the summit the parties came to agreement on:

• the implementation of the "Steinmeier Formula";

• further steps towards the withdrawal of troops;

• the exchange of hostages.

The parties to the talks failed to agree:

• on how to control the border despite the agreement on the “Steinmeier Formula”;

• on what it means to grant special status to the republics of Donbass;

• on the need for a direct dialogue between Kiev and the republics of Donbass.

The positions on which the managed to reach agreement comprise relations between Ukraine and other states, foreign policy, whereas what they could not agree on is Zelensky’s domestic and anti-Russian maneuver. [ii]

What makes this maneuver particularly strange is that it is at odds with a Steinmeier Formula paragraph on border control. As it turns out, Zelensky agrees to act on all of the formula’s provisions except one key point without which it loses its meaning.

On another point – what a special status of the republics of Donbass means - Ukraine began diplomatic, or rather, domestic political games before the meeting of the Trilateral Contact Group ahead of the H4 summit. Ukraine’s Minister of Foreign Affairs Vadim Pristayko said that Donbass should not expect any special status, while the special status of the Lugansk People’s Republic (LPR) and the Donetsk People’s Republic (DPR) as part of Ukraine could take effect only within the framework of a decentralization policy and without amending the country's Constitution. Later events confirmed Ukraine’s intention to sabotage the Minsk Agreements regarding a special status for the DPR and LPR.

The reasons for this position on the part of Zelensky, his administration and ministers are that Ukraine is so affected by the peculiarities of the internal political process that its leadership is not ready to take action on the implementation of the Minsk Agreements. In addition, despite the majority in parliament and the opportunity to use national resources to cement power, it fears that there will appear nationalists, who, as has already happened before, can become an instrument of political struggle.

The economic sphere did not become a breakthrough area in solving Ukrainian problems. Many of Zelensky’s campaign promises remained unfulfilled for  resource-related, political, or other reasons. Pledges such as “long-term low-cost loans,” “building roads in line with European standards,” “providing all citizens with access to high-speed Internet,” etc. ,  will apparently remain only words on his election program, as they run counter to the interests of Ukrainian oligarchs. There were also statements that, being ever-greens for presidential programs in Ukraine, nevertheless, each time caused battles but were not translated into life by any of the predecessors. Zelensky’s program included a provision on the “formation of a free land market”, which turned into a land reform, which had already been  voted on in the first reading and the pursuit of which will make it possible to obtain external resources to support the Ukrainian economy and secure the fulfillment of social commitments by the state. What is meant is the IMF loans. After voting on land laws, the Prime Minister of Ukraine Alexey Goncharuk outlined plans for the future openly expressing hopes for financial assistance: “Ukraine has demonstrated and continues to demonstrate the rapid and successful implementation of the reforms declared by the president, our government, and parliament. In recent weeks, the Ukrainian parliament passed a bill on trade in agricultural lands and approved in principle a bill on “unbundling”, which has already been signed by the president. Therefore, we hope to agree on a new long-term program of extended financing [from the IMF-D.B.], which will back our efforts to accelerate economic growth. ”

The land reform will create, on the one hand, the conditions for providing Ukrainian agro-holdings with more land plots, while, on the other hand, it can lead to foreign expansion into the Ukrainian land market, which will fall under the control of foreign companies. These companies will be able to determine the range and fate of Ukrainian agricultural products not only in foreign markets, but also in the domestic one.

The Ukrainian society and political forces have reacted to the land reform with protests, Yulia Tymoshenko’s Fatherland faction has switched to the opposition,  Chairman of the presidential party, Servant of the People, Alexander Kornienko, has expressed fears commenting on the land reform in the second reading: “I think we will face rallies, provocations, and most likely, attacks on the deputies.” [iii]

Such fears are far from groundless. According to research by the sociological group “Rating” conducted in October 2019, 53% of Ukrainians are against the lifting of the moratorium on the launch of a free land market, 31% are in favor. Most citizens oppose the sale of land to foreigners - 69%. [iv] Deputies continue to consider the land law parallel to the continuing protests under the Ukrainian parliament building.

In January, the Ukrainian MPs, the majority of them being members of Zelensky’s “Servant of the People” Party, adopted a law on education that discriminates against the Russian language and minority languages. This is suggestive of Zelensky’s evolution in the direction of the so-called "Ukrainian national patriotism." This takes place despite the fact that he became president to a large extent thanks to the support of Russian-speaking communities in the south and east of Ukraine.

Unlike the  onslaught on the language which can be seen, no matter how sad it may sound, as the traditional policy, the issue of historical memory takes Zelensky’s evolution to a new level and cause serious damage to the president’s image as a leader who pledged to restore peace in Ukrainian lands and in the souls of Ukrainians .

On January 27, while visiting Poland on the occasion of the anniversary of the liberation of the Auschwitz death camp, Vladimir Zelensky de facto accused the Soviet Union, as one of the parties, of unleashing the Second World War. He put the liberation of the death camp to the credit of the Ukrainians: “We will never forget Igor Pobirchenko, the commander of the T-34 tank, who, together with the crew, was the first to break into Auschwitz; all soldiers of the shock battalion of the 100th Lviv division, who entered the camp under the leadership of a Poltava resident of Jewish origin Anatoly Shapiro. Together with the soldiers of the 322nd Division of the 1st Ukrainian Front, they set it free.”[v]

Apparently, according to the “cunning” plan by Zelensky, his advisers and speechwriters, the names of the division and of the front — Lvov and 1st Ukrainian — should be enough for the ill-informed Western public to assume that it was the Ukrainians liberated the camp. Such details as the fact that all the above-mentioned military units were part of the Red Army and included representatives of different nationalities, were ignored completely – they do not fit into the logic of his speech, particularly, his statement that the Holocaust resulted from a conspiracy plan between Germany and the Soviet Union.[vi]  That's it - no more, no less!

This is not just a fraud or suppression of facts - it is an attempt to falsify history. There is no need to hurt the feelings of “Western democracies” and recall the Munich agreement of 1938, to recall that anti-Jewish laws were adopted in the Third Reich back in 1935, and that Jewish pogroms took place in 1938. And what Zelensky described as a "conspiracy" between the USSR and Germany in 1939 was the Non-Aggression Pact.

How can one account for such an interpretation of history from a head of state? One thing is clear: President Zelensky went through a severe reform school in Ukraine and in the West and has learned his lessons well - the Third Reich was defeated, the Soviet Union ceased to exist, so you can easily make them accountable for everything, and after diplomatic battles with Poland over honoring the “heroes” from among "Ukrainian nationalists” - make Poland a "present"- a statement that coincides with the position of Warsaw.

Apparently, this is not what a significant part of Ukrainian voters, primarily in the south-east of Ukraine, who voted for Zelensky, expected to hear from a front-line soldier’s grandson. By and large, the president of Ukraine had no political reason to make such a bow of reverence in relation to Poland.

This and other steps by President Zelensky are clear signs of an ongoing transformation. Highly unlikely that Zelensky has no idea what he is doing and saying. Nor is it likely that he does not understand the consequences of all this. Obviously, this shows his intention to worsen confrontation between Kiev and Moscow. If that is your choice, Mr. President, go ahead.

Zelensky has failed to turn the boiling nationalist oil of Ukrainian politics into a warm bath for himself. Rather, he expects this "boiling oil" to become his "warm bath". He came to power thanks to powerful electoral support and well-known slogans. But, unfortunately, history tends to repeat itself. Candidate Zelensky once stated that, unlike the then President Poroshenko, he intended to “sit down at the negotiating table with Russia,” bring peace to the Donbass, and much more. Now more and more events and facts add to the opinion that Zelensky may follow the political trajectory of his predecessor, whose supporters has dropped in number to the level of a “Poroshenko sect”.