Presidential elections - 2020, or does Trump have “federal reserve”? 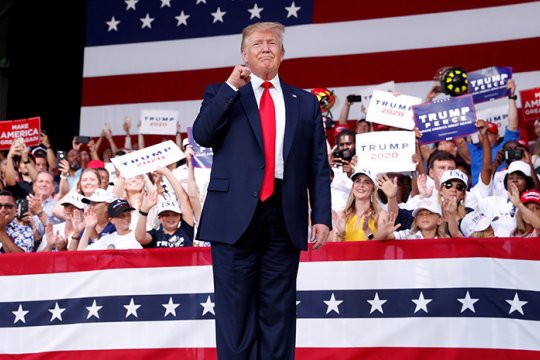 On July 31, the US Federal Reserve’s Open Market Committee cut interest rates – the first such move in 11 years. During the past 18 months, President Donald Trump has regularly criticized the country’s central bank for refusing to lower interest rates, calling the Fed’s policy the main reason for America’s current economic slowdown. Trump’s critics, in their turn, accuse him of trying to manipulate the Federal Reserve’s policy in a bid to secure the best conditions for his re-election 2020 re-election campaign. How can the state of the country’s economy and finances influence the choice the American voters will make next year?

The Federal Reserve’s current head, Jerome Powell, a lawyer who has been in the investment business for many years, is the Fed’s first chairperson since the 1970s, who has no professional economic education. Small wonder that he was initially viewed by many as Trump's political appointee. Still, until this very summer, Powell kept raising interest rates instead of lowering them, as Trump demanded, thus staying the course charted by his predecessor, Janet Yellen, whom Trump strongly criticized during his election campaign. Now that the Fed has cut interest rates, however, Donald Trump is still not happy. In a recent tweet, he said that what markets really expected from the Federal Reserve was not just to cut rates, but to send a clear signal about the start of a long period of “aggressive” easing of US monetary policy primarily aimed at counteracting similar measures by "China, the European Union and other countries of the world."

As a businessman, Donald Trump may feel the volatility of the US economy, and be fully aware of the academic studies of the past decades, above all about the state of the national economy and the year-to-year economic indicators, which significantly affect the voters’ political preferences, including for someone, who they want to see in the White House. We are not even talking about a full-blown recession – just an economic slowdown three or six months before Election Day. The proponents of this point of view believe that, according to all objective indicators, the decline in economic growth that happened in 2016 should have become "barely noticeable for most Americans." Still, it was noticeable enough to increase Trump’s electoral base. The very same thing could happen in 2020, since the currently high GDP growth rate may prove "unbearable" for the economy next year. Just as it happened in 2016, when the economy stopped growing by more than half compared to the very robust 2015. Right now, it is still premature to say if the US economy has reached its next peak, but many key indicators look very similar to how it was doing ahead of the 2016 presidential election. [ii] Trump’s critics could interpret the Federal Reserve’s current rate cut as an attempt to prevent a similar development and increase the incumbent’s chances for re-election.

Meanwhile, the interest rate cut could have a detrimental effect on the labor market. Even though the US economy is going strong, in a market economy you cannot keep reducing unemployment all the time. Besides, the rate of this reduction has consistently been slowing down since Donald Trump’s election. Moreover, most American economists believe that unemployment within 4 to 5 percent is “optimal” for maintaining economic growth rates. This is the de-facto "target" indicator the Fed has in mind. The modern economic theory maintains that when unemployment is too low, the central bank should raise the interest rate, not cut it. Now, however, the Fed says that it is more concerned about “stifled inflation.” This means that the US monetary authorities could now put any further decrease in unemployment to the back burner. A sharp drop in employment growth that happened a few months before the 2016 elections made many voters feel that the situation on the labor market was deteriorating. As a result, many of them turned their back on the party, whose leader was then at the White House.

In November 2018, the US economy was going strong with the GDP growing above three percent, unemployment falling, and salaries going up. Still, the Democrats won the largest number of seats in the House of Representatives in midterm congressional elections since 1974.

Finding himself in a potentially “no-way-out” standoff with the now Democratic-controlled lower house of Congress, President Trump could theoretically use a tactic of compromises with the opposition Democrats  and even “restore shattered confidence” between the two parties. However, he opted for a confrontational scenario repeatedly trying to shift responsibility for failures in domestic politics and the sluggish pace of reindustrialization  to “obstructionist” Democrats, “opposition-minded” Silicon Valley companies, and, above all, to foul play by external forces. On August 1, the White House announced that the United States would impose an additional 10 percent tax on $300 billion of Chinese imports before the month was out. On August 5, the US Treasury officially designated China a "currency manipulator," accusing Beijing of "undervaluing the yuan." Trump believes that a continued easing of the US monetary policy will finally help clinch a truly “great deal” with China.

The Federal Reserve apparently thinks otherwise though. According to Powell, two of the three reasons for the rate cut have to do with the Trump administration’s trade policy, which has been disruptive for the world economy and caused "tensions in trade relations." According to experts, the Federal Reserve is thus letting Trump know that he should reduce uncertainty and tension in international trade, namely to reconsider the policy of trade wars – something so many of his voters are so fond of. Many economists and business people in the United States agree with the Fed because the introduction of new duties on a long list of Chinese imports has resulted in higher retail prices, the loss of tens of thousands of jobs and has made many US industries less competitive in the world. US companies heavily dependent on the sale of their product in China have fallen victim to this conflict. The sense of uncertainty is also “working” against Trump who has locked horns with the Democrats, who now have a majority in the House of Representatives. Finally, China is already using retaliatory measures against companies located in the US states, which constitute Donald Trump’s electoral base. Trump’s actions may seriously undermine his chances of re-election in 2020.

The third reason for the rate cut is the Fed’s concern about the relatively low inflation. The nature of inflation is one of the biggest problems of economic theory because fears of rock-bottom inflation, fraught with deflation (a decrease in the general price level of goods and services due to excessively tight money supply) largely dictated the Federal Reserve’s monetary policy during the 1990s and early-2000s. This is what many experts see as one of the main causes of the 2008 financial crisis. On the one hand, with the interest rates now being where they are, it is premature to talk about the possibility of a new uncontrolled surge in borrowings, similar to the one that preceded the 2008 meltdown. On the other hand, some economists worry about the potential for growing risks in the US economy, if the Federal Reserve continues slashing interest rates. Critics of low rates have traditionally pointed to their direct relationship with the emergence of financial "bubbles" on the markets, which precipitated America’s slide into a recession in 2001 and 2007. [iii]

Finally, skeptics warn that official statistics about the state of the US economy make many people feel overly optimistic about the future. Meanwhile, indicators of leading companies’ performance show that their operating profits have stopped growing for quite some time now, and that their main income comes from exchange rate fluctuations and capitalization growth. Meanwhile, the US’ foreign debt keeps going up reaching a whopping $22 trillion, and the budget deficit is creeping up to $800 billion. This means that even the current GDP growth of almost 2.5 percent may not be enough to rectify the situation. “Under such circumstances, a single “spark” can send the fragile economic balance up in flames, and there is a sufficient number of such sparks around,” said Yelena Chizhevskaya, vice president of the RFI Bank for Mobile and Electronic Commerce. [iv]

From the domestic political point of view, if the Fed’s actions lead to a significant weakening of the dollar - and a number of experts are already talking about the start of the “bear cycle” of the US currency - this could result in a drop in incomes of US households in the walkup to the 2020 presidential elections.

Right now, America’s robust economic performance remains a major factor behind Donald Trump’s hopes for re-election in 2020. However, there are many signs of a possible decline, and a sharp one at that, in US economic growth rates “by the second half of 2020.” By the time the Americans go to the polls, their moods may be way less optimistic than they are today. Finally, President Trump, who pictures himself as the greatest “realist” of the modern West has been increasingly getting a taste for blackmailing and pressuring his opponents and nominal allies alike. Meanwhile, many economists now fear that the Trump administration’s “chaotic” and “provocative” actions may put the United States on a course to a new recession. If so, next year we may see unfolding a struggle for the post of the leader of one of the world’s greatest powers that could prove even more uncompromising than what we saw happening four years ago.