Presidential Elections in Brazil: what kind of domestic and international scenarios are opening on the eve of the next 26th October’s second round? 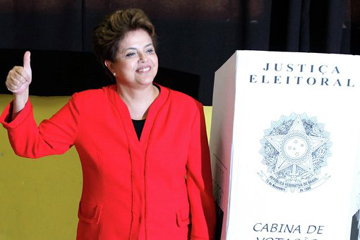 Results confirm that the last year’s presidential elections on October 5th were the most controversial in the current democratic Brazil: the PT candidate Dilma Rousseff, with her 41,5% of votes, has failed to avoid a second ballot, while the moderate Aécio Neves (PSDB) gained the 33,6%, far behind in the pre-election polls even compared to the other candidate Marina Silva (PSB), which succeeded the arena in full campaign due to the untimely death of Edward Campos, stopped at the 21,3% of votes. The result of Rousseff in this first round is the worst PT’s result since 2002. Nevertheless, for the first time the PT has seen confirmed the Governor of a large State as Minas Gerais: will be Fernando Pimentel (52% of votes); the PSDB has proved himself, however, in Sao Paulo with Geraldo Alckmin (57% of votes); the State of Rio de Janeiro goes to the second ballot: the candidate of the PMDB - Party allied with the government of the PT - Luiz Fernando Pezao with his 40% of votes will vie with the evangelical pastor of the PRB (Republican), Marcelo Crivela, who got 20% of votes.

According to the first IBOPE poll, done after the vote on October 8th, if the population went to vote the day after (on October 9th) Aécio Neves would have won 51% of votes and Dilma Rousseff 49% of votes. Two out of three voters who voted Marina Silva in the first round said they would have voted for Neves on the second one; while only 18% of them would have voted for Rousseff. After the first round emerges a clear division of the electorate into two blocks: the candidate of the PSDB has its best results in the regions of south and south-east of the country (where he is still in the lead in the polls on Rousseff, respectively at 61% to 33 % and 48% to 38% of the total votes). In the north and central-west there is a substantial equality between the two competitors, while the candidate of the PT is still in the lead in the north-east (59% to 32%). The electorate of the two candidates is readily identifiable: 63% of Neves voters receives more than 5 minimum wages per month; while only 29% of them vote for Rousseff. The proportion is reversed among those earning up to 1 minimum wage per month: 58% of them voted for Dilma; 33% voted for Aécio. Furthermore, while Dilma has a better grip on the catholic electorate (46% vs. 44% for Aécio), his rival is in the lead in the evangelical electorate (49% vs. 39% for Dilma).

On October 8th, Aécio Neves has received an important news in view to the next second round on October 26th: he collected the endorsement of the PSB and also of Marina Silva, but not from his Movement (Rede). Despite some member of the PSB, as the authoritative Luiza Erundina, former Prefect of Sao Paulo and supporter of many battles for the defense of fundamental human rights, has expressed opposition to the unconditional support of Neves’ PSDB - that would break the polarization between PSDB and PT - preferring rather to give an indication of a free vote to their voters, the important Silva’s dowry of votes, according to her own statements, may be conveyed on the moderate candidate. The support was greatly appreciated by Neves who, in order to obtain that part of electorate, has expressed his will to carry on the legacy of Edward Campos in Brazil.

Now we have to wonder, in addition to the internal perspectives that could open up after the outcome of the presidential election in Brazil, also what are the prospects in relations with BRICS countries, in particular with Russia, considering the weight of Brazil in this geopolitical aggregate and what might change in the balance of world powers. The presence of Aécio Neves at the ballots was definitely unexpected, since all the polls predicted as contenders for the second round the two leading woman, Marina Silva and Dilma Rousseff. In an international context, the Conservative Party of Aécio Neves might produce some changes, with geopolitical repercussions not only within the BRICS. Brazil has a prominent role within the BRICS and a strong partnership with Russia, a privileged partner in these new balances that are increasingly moving towards multipolarity. These new geopolitical aggregates, the BRICS in particular, are questioning the dominance of western countries, primarily the United States. Recently, Rousseff’s Brazil has promoted several initiatives, including the founding of the Bank of BRICS with the ambitious goal to exceed the dollar as a reserve currency. If Rousseff wins, this path won’t be interrupted and indeed it will strengthen the prospects for expansion of objectives, which, at present, should be realized at the beginning of 2015- 2016. Who will represent Brazil within BRICS will have to take account of this commitment. But the intents will be different: Dilma Rousseff’s Brazil has tried to move inside the BRICS in an anti-american function, concluding trade agreements with Putin’s Russia. Suffice it to say the cooperation agreement concluded between Brazil and Russia last July in the fields of science, technology and energy innovation. In August the brazilian government, taking advantage of the crisis in Ukraine, obtained the green light from Moscow to increase meat exports to Russia, since Putin has blocked the agri-food exports towards the United States and Europe after the controversy with Ukraine. Brazil has become a country capable to act as a counterbalance to western countries in order to conclude trade agreements: in the past these agreements could have been concluded only with those countries, whose sanctions, today, do not fear. Over the last 12 years has emerged in an inescapable way that Brazil, prior to Lula and then Dilma Rousseff, intends to become a global player towards the countries that count on the international arena, so it has concluded agreements with the BRICS countries, Latin America and China; with the intention of not forgetting its roots, the politics of foreign investment in Brazil has had particular regard also to Africa, seeking to promote development in an area of the world where many interests of China have moved. The Brazil of Aécio Neves and his moderate and pro-America party, perhaps even willing to enter into bilateral agreements with United States, would certainly be different from what we know today and the path taken by the PT would probably be questioned.