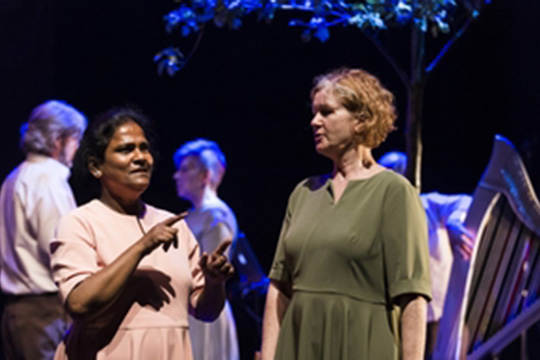 “From the first minutes you won’t understand that artists are deafblind people. Here they are main characters and the actors only help them to tell their stories, about how they live in a world of constant silence and darkness. ”

"The play «Touchable» is the dreams of those who do not hear or see come to life and become reality."

“There is an icon - the Softener of evil hearts. This performance for those who can hear and see is the softening of the hearts of healthy people. ”

Come and see the first-ever performance about people who listen to music without hearing, speak with each other different languages, feel the world without seeing it. On the same stage, deafblind people and professional artists from different countries play together.

“Touchables” is the only professional production in which both deafblind and professional actors are involved at the same time. The blind and deaf Michel Tilbeke, a Dutch swimmer, participant of the Paralympic Games 2010 and 2012, debuts in this theater project as an actor. Michel himself will tell the story of his life. The famous Dutch actress Dagmar Slahmolen will also shine on the stage.

"Touchable" is a truly special project. And it is wonderful that the play goes to the Netherlands and Belgium. We hardly have such creative projects. I am happy that I will participate in the performance and am ready to accept a new challenge. The project will show to deafblind people new features. Judge for yourself, is not it a challenge what I'm doing now? To agree to go on stage as an actor for the first time, and even play with the Russian theater? It's really cool! "- Michel Tilbeke, Dutch swimmer, participant of the Paralympic Games 2010 and 2012, actor.

Currently, a large-scale implementation of the Russia-Belgium-Netherlands: «Theater without Borders» project is beginning. The project is supported by the Embassy of the Russian Federation in the Kingdom of the Netherlands, the Embassy of the Russian Federation in Belgium, the Foundation for Presidential Grants, the Federal Agency for the Commonwealth of Independent States, compatriots living abroad and international humanitarian cooperation, the Center of International Cooperation Dutch Culture of the Ministry of Culture of the Netherlands, «Art, Science and Sport» Foundation, Philip Morris Sales and Marketing LLC, non-profit organizations of the Netherlands and Belgium.

The project aims to create an accessible cultural environment and opportunities for all people, regardless of their specificities, place of residence, nationality, and to draw attention to the topic of deaf and blindness. It includes:

1. Creating a theater troupe from Russian and Dutch deaf-blind, professional actors, directors, choreographers, sign language interpreters and conducting a full rehearsal cycle, workshops, workshops with the participation of viewers and the media

2. Theater shows in the cities of Den Boss, Brussels, Amsterdam, Moscow (the total number of spectators is not less than 900)

3. Creating a thematic newsletter with a series of videos on the organization of joint international inclusive creative and educational activities.

“The Russian experience of working with deaf-blind actors is in many ways unique and in demand in different countries, and we gladly share them through such joint international projects. They are useful and for us it is a way to attract the best world theater practices. This project and this tour are also cultural diplomacy, a way to talk about Russia and how we work with people with disabilities, to get new partners for our educational projects”, said the President of the Deafblind Support Fund 'Con-nection' (So-edinenie) Dmitry Polikanov.

Since 2014, Deafblind Support Fund 'Con-nection' (So-edinenie) has been implementing programs and projects aimed at the social and cultural integration of people with hearing and vision impairments. The performance of the Foundation and the Theater of Nations "Touchables" became one of the first key projects in the sphere of an inclusive theater and marked the beginning of the Foundation's Inclusive Drama School, which emerged with the support of the Theater of Nations, GITIS and the Moscow Art Theater School as a necessary step in the development of  a professional inclusive theater in Russia in February 2016.

The idea of staging the play arose from People’s Artist of Russia Yevgeny Mironov, who has been actively supporting the project together with Ingeborga Dapkunaite, his producer, and friends of the project, among whom are well-known  actresses and actors Chulpan Khamatova, Yegor Beroev, Evgeny Tsyganov, Tatiana Arntgolts, Anatoly Bely, Alisa Freindlich, Elena Morozova, Anna Kovalchuk. The performance was nominated for the Golden Mask-2016 award in the Experiment category.

Yevgeny Mironov, the author of the idea of the play: “We rejoice at the sun or the sound of the sea and do not even think about the fact that this is not given to someone, and when we accidentally encounter them, we experience a feeling of embarrassment and pity. They know this world by touch and smell, and when confronted with us and realizing that they are “others,” they feel lonely and somewhat defective. This is unfair. There is no "they" and "we." There are people who have to teach each other to look at the world with different eyes. ”

In 2017, the Foundation and the Center for the Implementation of Creative Projects “Inclusion” established by it created a new international version of the play “Touchables” - “In Touch / Touchables”.

The first premiere of the updated version of the performance took place in October 2017 in London on the stage of the Royal National Theater with the participation of Evgeny Mironov and the British actress Jenny Egatter, British and Russian deafblind people and actors of the theater Graeae, and in December, the production was seen by French viewers. "In Touch / Touchables" was shown in Paris as a part of the International Day of Persons with Disabilities at UNESCO headquarters with the support of the Alisher Usmanov Charity Foundation "Art, Science and Sport". Guest actress of theater and cinema Chulpan Khamatova and the winner of the show “Voice. Children” in France Jane Constance told the stories of the outstanding deafblind of the world.

Today, inclusive theater schools and performances are unique tools for the rehabilitation and socialization of deafblind people and people with other types of disabilities. The working methods of the Center are in demand by specialists from the cultural and social spheres from different countries, as well as interesting to a wide audience. These performances have already been watched by over 3,000 spectators from Russia, France, and the UK.

The performance, which took place on December 1 in Russia (Moscow), was the first in the framework of the international socio-cultural project “Russia - Belgium - Netherlands: Theater Without Borders”. There are three shows ahead: in Den Bosse, Brussels and Amsterdam. Also on December 7, at the Institute for the Deaf Khentalis, a Russian-Dutch round table will talk be held for specialists working with deafblind people.

Contacts for the media: Natalia Beekmans-Kuzina

(The performance will be in Russian, English, Dutch and sign languages)

Theater at the Russian Center for Science and Culture (RCSC) in Brussels 19.00

Admission is free, by prior registration http://bel.rs.gov.ru/ru/announcements/16991

About the Center "Inclusion"

Center for the implementation of creative projects "Inclusion" was opened on February 20, 2017. The founder of the Center is the Deafblind Support Fund 'Con-nection' (So-edinenie). The main objectives of the Center are: socialization and development of the creative potential of deafblind people and people with other types of disabilities; changing public opinion regarding people with disabilities. At present, the activity of the Center for Creative Projects is represented by theater and educational areas. The center created 7 performances and opened inclusive drama schools in 5 cities of Russia: Moscow, St. Petersburg, Yekaterinburg, Kazan and Novosibirsk. In 2018, Inclusion received a grant from the Presidential Grants Foundation for the development of an inclusive theater in Russia. The project “Three in One: Inclusive Theater as a Means of Rehabilitation, Socialization and Enlightenment” won the first contest of the Foundation for Presidential Grants.

The mission of the fund is to become a conduit between the world of the deafblind and the sighted and hearing to develop and combine successful solutions and practices that give deafblind people the opportunity for self-realization, development and integration into society.

Since 2014, the Deafblind Support Fund 'Con-nection' (So-edinenie) has been implementing programs and projects aimed at the social and cultural integration of people with hearing and vision impairments. The performance of the Foundation and the Theater of Nations "Touchables" became one of the first key projects in the sphere of inclusive theater and marked the beginning of the Foundation's inclusive drama school, which appeared with the support of the Theater of Nations, GITIS and the Moscow Art Theater School.

About the Art, Science and Sport Foundation

The Foundation was founded in 2006 by the Russian entrepreneur and philanthropist Alisher Usmanov in order to support socially significant initiatives in the field of culture, art and sports, as well as scientific, educational and social projects in the Russian Federation. The Foundation pays great attention to the inclusive direction in culture. As a part of a program for people with visual impairment «The Special Look» it provides grants for the creation of inclusive theatrical productions, develops a system for audio description, and creates a barrier-free environment for blind and visually impaired people in Russia.” In addition, in the framework of «the Special Look» program, ophthalmologic innovations are supported and targeted ophthalmologic assistance is provided.

The Foundation is the sole operator of grants of the President of the Russian Federation for the development of civil society since April 3, 2017.