Pressure on the Serbian Orthodox Church in Montenegro 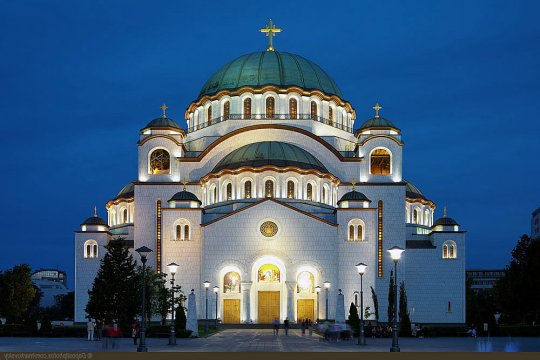 The Montenegrin Government adopted a draft law on May 16 that included a register of all religious objects, for which they claim that they were formerly owned by the independent kingdom of Montenegro before it become part of the Kingdom of Serbs, Croats and Slovenes in 1918. The new law states that religious communities may only retain ownership of their property if they have clear evidence of ownership, triggering accusations from Serbian Orthodox Church that the Government plans to dispute the Church’s property.

”If there is no such evidence, it is a matter of property created and acquired by the state of Montenegro and represents the cultural heritage of all its citizens,” the draft says. Such property will be listed as a cultural treasure, that is, as state property of Montenegro.

On June 8 at the election conference of the Democratic Party of Socialists (DPS) in Niksic, Party President Milo Djukanovic said that the Serbian Orthodox Church (SPC) is trying to protect the "big Serbia infrastructure".(1) Djukanovic also accused the Serbian Orthodox Church, whose members constitute the overwhelming majority of Christians in Montenegro, of hindering the European ambitions of society, and of trying to keep the religious monopoly in the country. Previously, Djukanovic had declared that like Ukraine, Montenego will ask for the autocephaly of the Montenegrin Orthodox Church, which is not recognized.

According to him, in the Balkans, as well as in Montenegro, there is still a difficult struggle between the two policies - one that the DPS and Montenegro lead, which is the Europeanization of this area, and the other that tries to conserve the state of the lagging behind of the Balkans. Although, as he pointed out, they did a lot on the building of Montenegrin identity, there was another important step, which is to "correct the serious injustice" done at the beginning of the 20th century and the abolition of the Montenegrin Orthodox Church. He suggested that he would work devotedly to the reconstruction of the Montenegrin Orthodox Church, whether somebody like it or not, as well as to guarantee a real but not formal freedom of religion.

„We will not formally ensure that people can pray to God but only in those churches that will be monopolized by them, in this case, the Serbian Orthodox Church. No, it's not the freedom of religion. We will fight for the freedom of religion and the separation of the church from the state. We will not allow contemporary Montenegro to live under the dictation of a religious organization that represents the relic of the past and which can hardly understand that it has long since passed and that Montenegro, like Serbia and all the societies in the Western Balkans, have the right to its own consistent European future, "said Montenegrin president.(2)

Metropolitan Amfilohije of Montenegro and the Littoral (Serbian Orthodox Church) was shocked by the statement of the Montenegrin president.

"I was stunned by what I heard from the President of Montenegro, the man who is the successor of the communist Government and who publicly declare himself as an atheist. On the other hand, he complains that the church should not interfere in politics, and he tries to be the head of the church, to create its own church. This is the first time in history that an atheist creates a church”.(3)

In a previous interview with the news agency TASS, Metropolitan Amfilohije recalled that the project of the so-called “Montenegrin Church” emanated from the communist rule, already in the years 1970-1980. The Metropolitan mentioned that “the Montenegrin Church” is not recognized by anyone, except by the Ukrainian schismatics: “The only one who has recognized this “Church of Montenegro” is [Filaret] Denisenko. Now, they hope that Constantinople will recognize them, but this is absolutely impossible because Dedeic, who is at the head of the so-called Montenegrin Orthodox Church, was a priest of the Patriarchate of Constantinople in Rome, and was laicized because of his crimes. So there can be no such recognition”.

Serbian Orthodox Patriarch Irinej warned Montenegrin President Djukanovic that his actions might lead to a formal curse, or anathema, being declared.

“Let God give him the mind to think what he is doing, and not deserve the anathema of the whole Serbian people and the Serbian Orthodox Church,” Patriarch Irinej told a Church TV station Hram(Temple).

Western centers of power supported Milo Djukanovic in 1997 and 1999 against Slobodan Milosevic. He was allowed to win the presidential election with various non-democratic methods, and finally in 2006 to make a referendum for separation from Serbia. The referendum was held in a totally irregular atmosphere. Djukanovic is the wildcard of the West who has agreed, to keep Milo Djukanovic in power to change the traditional Serbian/Slavic – Orthodox identity into Montenegrin, Roman Catholic and Western identity. Serbian identity of Montenegro, has already been broken through decades of Yugoslav communist rule which made a strong promotion of Montenegrin nation. As a result, state with a completely new and artificial identity was created.

The only missing link is the Montenegrin church. This is where the global conflict of Roman Catholicism and Orthodoxy is happening. The so-called Montenegrin Orthodox Church openly expresses sympathy for the Catholic Church. If the project of the Government of Montenegro and the West were to pass, Serbian Orthodoxy would be pushed from the Adriatic. That would be the strongest blow to Serbia and Republic of Srpska. It is not pretentious to say that the Serbian people and the Serbian Orthodox Church, the historical nation and institution of Montenegro came to the red line of survival of their identity, beyond which there is no further withdrawal.