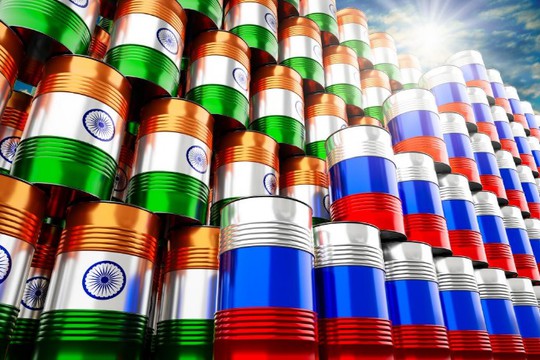 “USA hopes to kill three birds with one stone — cripple India’s burgeoning oil trade with Russia; damage India’s relations with Russia; and, frogmarch the Modi government into the western camp in the new Cold War conditions,” such is the analysis of the situation around the new US oil policy, presented by prominent international expert, Ambassador MK Bhadrakumar.

Just after a finance ministers’ of the G7 countries meeting (USA, Canada, UK, France, Germany, Italy and Japan) he writes: they approved the American proposal to impose a price cap on Russian oil in an innovative weaponisation of sanctions against Russia.

India’s strategic autonomy is coming under challenge to decide – at what price and from where? – India can most advantageously source energy supplies, which is vital for the overall performance of its economy.

USA is incensed that India stepped up imports of Russian oil at a ‘discounted price’. US deputy treasury secretary Wally Adeyemo recently visited Delhi to convey the firm message that Washington expects India to join the G7 move to impose a price cap on Russian oil.

Adeyemo’s proposition: ‘If India joins the coalition, it can have a say in deciding the price cap’! He argued that the US price cap would give Indians substantially more leverage, driving down the price of Russian oil even further! Now, that’s a load of sophistry.

Regarding the G7 price cap as a humiliating US diktat, Russian Deputy Prime Minister Alexander Novak said: ‘We simply will not supply our oil and petroleum products to such companies or countries that will impose restrictions, because we will not work in non-market conditions.’

The Russians are seasoned players in oil politics.

If Russia refuses to abide by the G7 regime and cuts production, that would cause further energy price increases in an already high-inflation environment.

But the danger lies somewhere else: While the price cap policy will not put Russia under an immediate fiscal stress that the G7 expects, the market reaction will be unpredictable.

Russia can simply close exports to those who agree to comply with the rules, and then the oil prices will really fly into space — the current figure of about $100 a barrel can easily double its value, or even triple, if the deficit reaches a threatening scale.

The bottomline is, Russia has no great need to sell in the prevailing conditions of overabundance of foreign currency in its coffers, and the US cannot match Moscow’s extensive networking with OPEC partners.

India and Russia can jointly work out a roadmap. But the political will should be there to preserve India’s strategic autonomy, writes MK Bhadrakumar.

China has already opposed the G7 decision. Now the prospect of how the West is and will be strong enough to dictate its terms of world trade to the rest of the world? – depends on the position of India.