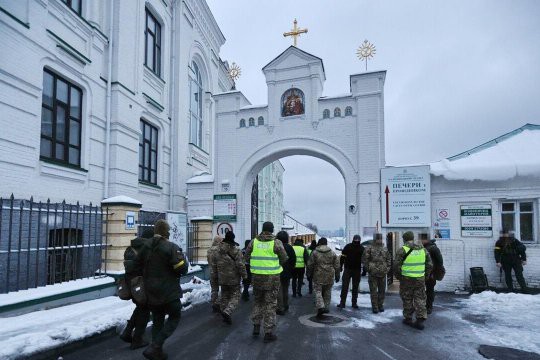 The searches conducted by Ukraine’s State Security Service (SBU) in the monasteries and dioceses of the canonical Ukrainian Orthodox Church (UOC) that we wrote about in our previous publication, continue despite all the senselessness and ineffectiveness of these actions. According to the Union of Orthodox Journalists of Ukraine in the Zhytomyr region [1], on December 8, the SBU began searches in the monasteries of the Korostensky district of the Ovruch diocese - the Chopovitsky convent, the monastery of the Kazan Icon of the Mother of God and the hermitage of this monastery in honor of Silouan the Athonite.

The SBU claims that the previous such searches were to “reveal the subversive activities of Russian intelligence services in the religious environment" of Ukraine and to counteract this “activity." Just like that...

We dare to assume, however, that the real purpose of all this is quite different.

In his video message on December 1, 2022, President Zelensky said that the National Security and Defense Council had been meeting to decide the future of the canonical UOC, which has long existed in Ukraine. The following day, the schismatic “Orthodox Church of Ukraine” (OCU), hastily created by Kiev with the help of the Patriarchate of Constantinople, registered the legal entity "Kiev-Pechersk Lavra" and on that very same day, Zelensky stated that the announced measures against the UOC were  just the beginning, and that there would more of this coming up: "That's not all. There will be more steps. Ukraine will never stop halfway again.”[2]

The question is, however, who Zelensky thinks he is and what right he has to interfere in church affairs, even in keeping with the Ukrainian constitution.

The Ukrainian authorities are not going to limit themselves with searches alone, however, as the SBU is simultaneously spreading leaflets and materials compromising the UOC in the searched premises. They need to "find" compromising evidence… And "find" they do - in the Korets convent and during searches in the Khust, Rivne and Zhytomyr dioceses.

The first thought that comes to mind is that everything is being done to drum into the people’s heads the idea of a close connection between the canonical UOC with the hated "Russian aggressor,” and simultaneously give the authorities reasons to remove the legitimate Church from the legal field thus paving the way for its eventual liquidation.

As we can see from the results of these "events," no such reasons and evidence have been found no matter how hard the Ukrainian law enforcers have tried to dig them up. Therefore, it is becoming increasingly clear that the true goal of the so-called "counterintelligence activities" is just to intimidate the clergy and force them to "voluntarily" transfer to a schismatic structure. According to Metropolitan of Chernivtsi and Bukovina Meletiy, during the search, one “... of those ‘kind’ people in masks beckoned to me in the yard and said: “If you want this circus to stop and to live in peace, then go to the OCU.’" [3]

One of the authors of bills No. 8221 and 8262, a member of the Verkhovna Rada from the Servant of the People faction, the head of the parliamentary committee on humanitarian and information policy, Nikita Poturaev, was crystal clear about this: “We hope that they (laws – M.L.) will be voted on as a package. Thus, we’ll solve two problems atonce: we will put an end to the existence of the ROC and organizations that in any way continue to be affiliated with it and simplify the transitions (to a schismatic structure – M.L.)” [4].

He is echoed by former Verkhovna Rada deputy Boryslav Bereza: “... most of the ordinary priests who today serve in the UOC are ready to move to the OCU ... This will not always be a moral choice, but rather a pragmatic one, but it will be just that” [5]. In other words, the clergy and believers of the UOC will eventually bend under pressure and will join the newly created OCU, sponsored by Kiev.

Based on the above facts, we can see that the people who stage, direct and carry out these "events" and "searches" that smack of pogroms, not only realize their failure but purposely organize such a "circus" with an eye to prodding the canonical bishops and clergy towards making the "right choice."

Judging by the behavior of some Ukrainian bishops and priests, we see that some of them, out of fear or for other reasons, are tempted to collaborate with the Nazi authorities, forgetting about their sacred duty of confessing the Faith. God be their judge! Time will tell, however, whether the SBU succeeds in its coercive effort that the OCU so hopes for. The Russian Church went through many trials and tribulations in the 20th century, but survived them all...