Psyops in an Ever-changing World: The Age of Influencers 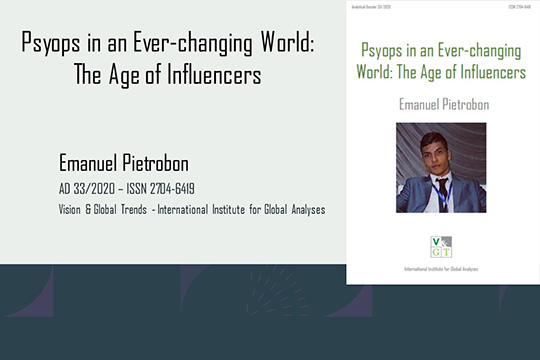 Many political scientists, strategists and experts of various kind argue that fake news are the greatest and most lethal feature of today’s hybrid warfares. They are right, partly. Social media and social networks are proving themselves incredibly destabilisation-powered, from the way they can be used to coordinate civil unrests and revolution to the way they can be used to spread fake news, a term used by laymen to portray in one word the more complex phenomenon of disinformation.

Today’s and tomorrow’s wars are being fought – and will be fought – in the cyberspace and the reason is not merely tied to the digitization of activities, services, finance, stock exchanges, critical infrastructures, public databases, command centres, and so on. People themselves are getting digital, namely they are increasingly less exposed to reality due to deep impact of e-commerce, smart working, and to the rise of social networks.

The war went digital not because of the military or of the finance but because people are losing the contact with real life and up to the point where they spend much more time on their phones and computers, checking and updating constantly their Facebook or their Instagram, than on having a walk or doing something free from technology.

Technology- and internet-addicted users experience many negative repercussions, especially on psyche, creativity and intelligence, and they end up being trapped by their cyber-life. The most important aspect to us is not how the internet is damaging people’s health but how the States can use it to advance their interests.