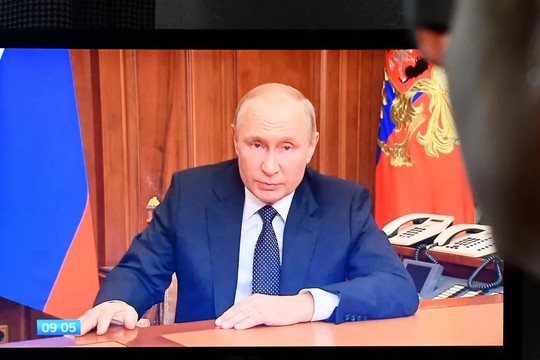 Russian President Vladimir Putin on Wednesday ordered a partial mobilization that will call up 300,000 reservists and warned Western countries that Moscow would use nuclear weapons to defend its territory. “If the territorial integrity of our country is threatened, we will without doubt use all available means to protect Russia and our people — this is not a bluff,” Putin said in a televised address, writes “Defend Democracy Press”.

“The citizens of Russia can rest assured that the territorial integrity of our Motherland, our independence, and freedom will be defended — I repeat — by all the systems available to us. Those who are using nuclear blackmail against us should know that the weathervane can turn around,” he said.

The Russian leader expressed support for referendums on joining Russia that will be held from September 23-27. Referendums will be held in the self-declared Donetsk and Luhansk republics in the Donbas region, and in the oblasts of Kherson and Zaporizhzhia.

“I would like to emphasize that we will do everything necessary to create safe conditions for these referendums so that people can express their will. And we will support the choice of future made by the majority of people in the Donetsk and Luhansk people’s republics and the Zaporizhzhia and Kherson regions,” Putin said.

Putin made clear that he blames the US and its allies for the current situation and said a peace deal was possible earlier in the war after Russian and Ukrainian negotiators held talks in Istanbul. He said that he was making the details of the peace talks public for the first time.

“After the start of the special military operation, in particular after the Istanbul talks, Kyiv representatives voiced quite a positive response to our proposals. These proposals concerned above all, ensuring Russia’s security and interests,” he said.

Reports in Western media and Ukrainian media have also said that a deal was close after the Istanbul talks, which were held at the end of March. But according to a report from Ukrainska Pravda, former British Prime Minister Boris Johnson traveled to Kyiv in April and told Ukrainian President Volodymyr Zelensky that even if he was ready to sign a deal with Putin, the collective West was not.

“A peaceful settlement obviously did not suit the West, which is why, after certain compromises were coordinated, Kyiv was actually ordered to wreck all these agreements,” Putin said.

The Russian leader said that Washington, London, and Brussels were now “openly encouraging Kyiv to move the hostilities to our territory.”

Vladimir Putin has given a national address in which he has announced the partial mobilisation of forces in Russia. He said that the army was facing the military operations of the collective west on a frontline of over 1,000 km in Ukraine. Those in the military reserves would be called up. He accused the west of starting a war against Russia in Ukraine in 2014. “In its aggressive anti-Russian policy the west has crossed all lines,” the Russian president said. He accused the west of planning to destroy Russia and use nuclear blackmail, stresses ‘The Guardian”. Putin said he would use “all means available to us” and that those who are trying to use nuclear blackmail against Russia will find the tables can be turned against them. He explicitly said “I’m not bluffing.”

Western officials are anxious about the prospect of escalation should Russian front lines in the south collapse, enabling a Ukrainian ground assault on Crimea, writes “The Economist”. Mr Putin’s aim might be to raise the same fears in the East, perhaps inviting Western pressure on Ukraine — reliant as it is on American and European arms and ammunition — to temper its attacks. That strategy would aim to capitalise on Western worries that Russia might use a nuclear weapon, something Joe Biden, America’s president, warned against publicly on September 18th.

“Here it is worth citing the main points from Putin's speech, writes “Le Figaro” from Paris. He believes that "in its aggressive anti-Russian policy, the West has crossed all boundaries." From Putin's point of view, there was even talk of strikes against Crimea and other Russian territories. "Western countries are pushing Ukraine to be even more aggressive towards Russia," Putin said.

Allegedly, the goal of the West is to split Russia, as the Soviet Union was split. Nuclear blackmail also came into play. But Russia also has various means of destruction. If Russia's interests are ever threatened, Putin said, " will be defended by all the systems available to us."

“Putin spoke tough. However, the reaction of the West is no less harsh.” New British Prime Minister Liz Truss said she intends to urge UN members to "take a stand for freedom and democracy" in the face of the escalation in Ukraine. "This is a watershed moment in British history, in the history of this organization and in the history of freedom," she said, quotes “Le Figaro”.