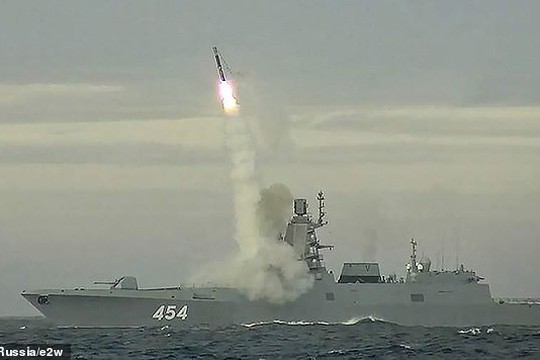 With a mixed feeling of hatred for Russia and fear of the might of the Russian navy, the British newspaper ‘The Daily Mail’ wrote – “Vladimir Putin has gleefully launched a warship armed with new Mach 9 nuclear-capable hypersonic ‘Zircon’ cruise missiles on a mission to challenge the West”.

Putin claimed the missiles have 'no equivalent in the World'.

The Russian President took part in an online ceremony with Defence Minister Sergei Shoigu to deploy the ‘Admiral Gorshkov’(photo) – a warship armed with hypersonic ‘Zircon’ missiles – for its mission in which it will pass Britain to the Atlantic and Indian Oceans and Mediterranean Sea, armed with one of the world's deadliest weapons.

The vessel immediately fired a test launch of the nuclear-capable cutting-edge ‘Zircon’ missiles, which travel at speeds of nearly 7,000mph, into the Barents Sea, hitting a target 620 miles away in the White Sea, - the Kremlin claimed.

The new mission is set to take the ‘Gorshkov’ from Severomorsk past Britain ahead of war games in the Mediterranean – but Moscow has yet to reveal the exact timings or route for the warship.

Moscow has boasted that the ‘Gorshkov’ is 'the most dangerous enemy of surface ships in the world's oceans' now it is armed with the new hypersonic missile. It is also carrying state-of-the-art ‘Kalibr’ missiles.

Russian super-weapons are on full alert. Now in the West the understanding comes -  its military activity against Russia in Ukraine could get an adequate response.