Putin: The military potential and capabilities of NATO are being widely used against Russia 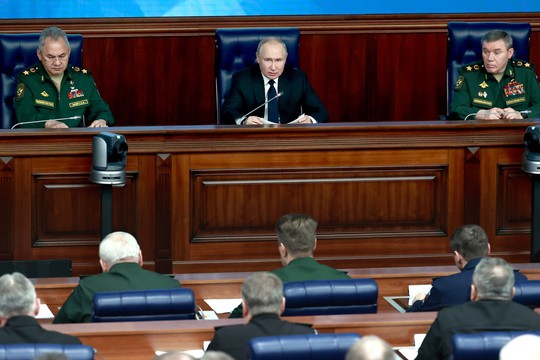 Vladimir Putin spoke at an expanded meeting of the Board of the Defence Ministry, which was held at the National Defence Control Centre. He said in particular:

- It is well known that the military potential and capabilities of almost all major NATO countries are being widely used against Russia.

- We are well aware of all the NATO forces and resources that they have been using against us over the course of the special military operation. You have all the information, and it should be carefully analyzed and used to build up our Armed Forces, as I have said, to improve the combat capabilities of our troops, as well as our national special services.

- Our units have gained extensive combat experience during this special operation.

- The experience of the special military operation, as well as what our troops gained in Syria, should, as I have said, pave the way for a major improvement in combat training, and should be applied in our preparations and in our exercises and training at all levels.

- We will continue maintaining and improving the combat readiness of the nuclear triad. It is the main guarantee that our sovereignty and territorial integrity, strategic parity and the general balance of forces in the world are preserved. This year, the level of modern armaments in the strategic nuclear forces has already exceeded 91 percent.

- We continue rearming the regiments of our strategic missile forces with modern missile systems with Avangard hypersonic warheads. In the near future, Sarmat ICBMs will be put on combat duty for the first time.

- Our troops continue receiving Yars missiles. We will continue developing hypersonic missile systems with unique characteristics, unmatched in the world.

- It is important to enhance the combat capabilities of the Aerospace Forces, including the numbers of fighters and bombers operating in the zone covered by modern air defence systems.

- I would like to draw the attention of the Defence Minister, the Chief of the General Staff and all the commanders here: we have no funding restrictions. The country, the Government will provide whatever the Army asks for, anything.

- As you know, 300,000 people have been drafted into the Armed Forces. Some of them are already in the zone of hostilities. As the Defence Minister and the Chief of the General Staff report, 150,000 people are undergoing training at military grounds and this reserve is adequate for conducting the operation. It is basically a strategic reserve that is not being used in combat operations currently, but people undergo the required training there.