Radicalization is the Future of Ukraine 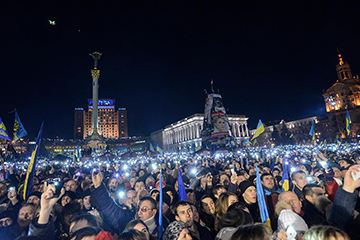 The events in Ukraine are not covered properly by Western media.

First and foremost, Western media avoid mentioning the fact that many members of Ukrainian ultranationalist organizations now have positions in the official power system, as well as in the army and police. This fusion of Ukrainian nationalists, the military, and pro-governmental paramilitary groups is not spontaneous but a deliberate plan.

During the so-called Orange Revolution in 2004, the pro-Western candidate and Ukrainian nationalist Victor Yushchenko won the presidency against then-Prime Minister Victor Yanukovich. Yushchenko was swept into power by a wave of people`s dissatisfaction with problems in the the socio-economic situation in the country. However, the dissatisfaction was sophisticatedly whipped up and directed by foreign strategists, resulting in a political and economical rupture between two potential economic partners – Ukraine and Russia.

Yushchenko`s rule turned out to be a great frustration for Ukrainians and it was not difficult for Victor Yanukovich to defeat him in the following presidential elections. As president, Victor Yanukovich began by moving closer to the West, and during this time his politics were supported in the Western media. As soon as he started to incline towards Russia he turned into a dictator almost overnight, and his politics and personality were demonized in Western media.

Once again, in 2013-2014, the real dissatisfaction of the people concerning the socio-economic situation in the country was used by Western strategists, resulting in Yanukovich being toppled for the second time.

The coup in 2013-2014 took place under different circumstances. Ukrainians were already frustrated by both Victors – Yanukovich and Yushchenko. The mild variant of color revolutions, as happened in 2004, would be doomed to failure. People would not demonstrate in such large numbers as they did in 2004. They had learned some lessons already and would rather stay passive.

But a solution was found: quantity can be compensated by “quality.” In other words, the passive majority can be overcome by an active minority. The latter could compensate for its small numbers with its radicalism. Any observer of the Kiev Maidan events could tell that the number of participants was much smaller than in 2004. And Maidan was more radical than 10 years ago and determined to go much further. The main perpetrators of Maidan in 2013-2014 are members of radical organizations whose ideology is close to that of Nazism.

According to eyewitness reports from Eastern Ukraine, the Ukrainian army is responsible for cruel and violent actions against rebels as well as civilians. This is not surprising when we take into account the number of right-wing radicals being enrolled into the army units. A number of notorious Ukrainian Army batallions made up of volunteers are known for punitive actions against East Ukraine population, such as the Dnepr, Ukraina, Azov militias. The founder of the latter two units is Ukrainian congressman Oleg Liashko, the leader of Radical Party and uncompromising adversary of Eastern Ukraine rebels.

According to him, half of the Azov fighters are former convicts. Liashko said that it’s better to deal with convicts who are ready to fight than with policemen who refuse to shoot at Ukrainians. The other half are members of Ukrainian ultranationalistic organizations. The members of the other battalions are no better.

The Azov fighters say a special prayer before going to the front line. The text of the prayer has already provoked the indignation of Polish priest Tadeusz Isakowicz-Zalesski, a well-known opponent of Ukrainian nationalistic ideology. Instead of God and angels, the prayer mentions Ukraine and the leaders of the Ukrainian pro-Nazi movement in WWII, Stepan Bandera and Roman Shukhevich: “Ukraine, Mother of Heroes, come to my heart… to retaliate for… the heroic death of heroes… Shukhevich, Bandera…”.  Both Bandera and Shukhevich are known to be responsible for massacres committed against the Polish and Jewish populace of Western Ukraine under Nazi occupation in the 1940s.

Such a high concentration of radical and criminal volunteers in the Ukrainian army is the cause of numerous acts of marauding and killings of civilians in Eastern Ukraine. To set such volunteers as the example of Ukrainian “patriotism” is unacceptable because it makes the radicals out to be the only kind of Ukrainian patriots. There are not very many countries in the world where the sympathizers of neo-Nazi movements are massively present in government authority bodies, and Ukraine is one of them. Almost all leading political parties currently in the parliament – Vitaly Klichko`s Udar party, Yulia Timoshenko`s Batkiwshchina party, Oleg Tiagnibok`s Svoboda party – support the idea that during the Second World War, the pro-Nazi regiments of Bandera and Shukhevich fought for freedom and rights of Ukrainians. These are the people who will rule Ukraine during the next five years.

This approach to ideological topics has already split Ukrainian society. Kiev manages to garner the sympathy of some citizens owing to propaganda manipulations, but the rest do not put up with such a policy. Ukrainian society is deeply cleft and the government knows it. The only way to keep the citizens together, therefore, is to invent a foe. Russia was designated as the enemy. Kiev is now wasting a lot of resources to heat up anti-Russian opinion among Ukrainians in order to prevent them from thinking about the impending economic disaster.

Meanwhile Kiev drafts more and more men and women into the Ukrainian Army. The mobilization age was raised to 55 years. Recently representatives of the nationalist movement in parliament proposed to raise it further, to 60 years. This is because Ukrainian youth are unwilling to shed blood for the new government`s ambitions. Ukrainian mothers throughout the country protest against such a massive draft and block the military units, demanding that the authorities bring their sons back from the front line.

In the meantime, many would-be draftees are escaping from the country, mostly to Russia. Kiev has ordered Ukrainian borders to be closed, not only with Russia but also with other states, to prevent young men from fleeing abroad. Now it is quite difficult for young Ukrainians to leave their country. They do not want to join the Army but they are being forced to.

Vladislav Gulevich is a Ukrainian journalist who has recently fled to Russia.