Referendum Failure in Moldova as a Triumph of Democracy 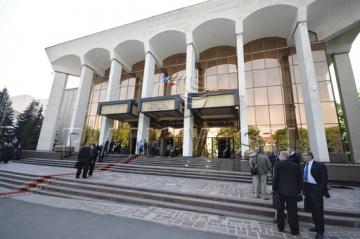 The unanticipated failure of the the September 5 constitutional referendum in Moldova came as a shock not only to the pro-Western faction of the country's elite but no less to the forces within the EU which hoped the vote would help push Russia out of the strategic Transnistria and weaken its positions in the Balkans – Black Sea - Caspian region. The inability of the ruling coalition – the Alliance for European Integration - to mobilize support even as its own referendum scenario was being put into practice showed clearly that these days political technologies no longer outweigh common sense in Moldova and other post-Soviet republics. As a result, Moscow is presented with an opportunity to achieve political gains both in Tiraspol and in Chisinau and to promote a solution of the problem of Transnistria that would benefit Russia and the peoples of Moldova and Transnistria – much to the disappointment of the EU and the ideologists of greater Romania.

According to preliminary data supplied by Moldova's central electoral commission, the turnout stayed below 30% nationwide and barely topped 10% in Gagauzia. Voters at the referendum were asked to express their opinion on reverting to popular votes for president instead of the current system, wherein the head of state is elected by the parliament, but the population was markedly unenthusiastic. A third of the electorate had to express support for the reform to validate the referendum, but the threshold was not reached even in Chisinau so far believed to be solidly pro-Western. Even among those who did bother to come to the polling stations, only 87% said Yes to the proposed reform.

For the initiators of the referendum, the reality turned out to be much grimmer than their forecasts showed. The legislation hurriedly tailored by the referendum date required the consent of just 50% of the voters plus a turnout at the level of a third of the electorate – the consent of just 17% of the total electorate, in other words - for the constitutional amendments to enter into force. The failure of the Alliance for European Integration to sell its initiative even given such relaxed requirements counts as a complete fiasco.

Why did the seemingly constructive attempt to lift Moldova out of its permanent domestic political crisis meet with the population's resistance? The explanation is that - as the Moldovan opposition was quick to realize - the organizers of the referendum pursued their own narrow agenda and their reckoning was unrelated to the tasks of overcoming the crisis and building a stable statehood in Moldova. The leadership of the Alliance for European Integration and personally Moldova's interim president Mihai Ghimpu openly regarded the referendum law and the September 5 referendum as a prologue to the implementation of their much more ambitious program.

Formally, the constitutional referendum was needed because – as a result of the crisis provoked by the pro-Western and pro-Romanian forces - Moldova survived without a properly established and efficient administration since the spring of 2009. The current crisis began with the April, 2009 parliamentary elections which were won by the communists. Upset about the outcome, the opposition instigated public unrest which culminated in the seizure of the presidential administration building and other state institutions by the mob upholding slogans of Moldova's unification with Romania. Subsequently the country faced rounds of elections boycotts and counter-boycotts and in September, 2009 parliament speaker Ghimpu emerged as the interim president.

Since then Ghimpu not only antagonized half of Moldova's population which did not favor his pro-Romanian and anti-Russian agenda, but even departed from the country's constitution and ran into a conflict with the Council of Europe. According to the constitution and as recommended by the Council of Europe, he was supposed to disband the parliament already in June and launch snap elections. Instead, Ghimpu and the Alliance for European Integration decided to amend the constitution with the goal of giving greater powers to the president and preserving the parliament dominated by the pro-Western forces. Direct presidential elections based on the deliberately unclear formulations offered at the referendum could make it formally possible to avoid the dissolution of the parliament.

From the outset, it was an open secret of the Alliance for European Integration that it needed greater presidential authority to go ahead with merging Moldova into Romania. It was no coincidence that a couple of months before the referendum Ghimpu had the period of Moldova's existence as part of the USSR officially declared “Soviet occupation”. Moreover, Ghimpu is known to have said he came to power to “tell citizens the truth that we are Romanians”.

On the eve of the referendum, the package of initiatives put together by a special commission – ranging from the change of the name of Moldova's official language to Romanian and to exchanging the country's neutrality status for NATO membership, all via simplified referendum procedures - must have been waiting on Ghimpu's desk.

At the moment, there are reasons to expect that the Alliance for European Integration will be taking desperate steps to retain power. As the world saw in April, 2009, the steps can be illicit and even lead to bloodshed. On the other hand, the outcome of the September 5 referendum instills hope that the Moldovan society will finally get rid of the politically bankrupt Chisinau regime.