Referendum in Turkey and US-Made Sufism 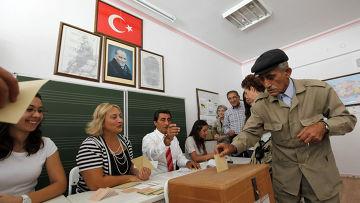 Turkey's September 12 referendum dealt a sever blow to the positions of secularists in the country. Recep Erdogan's Justice and Development Party secured the support of 58% of the voters for its reform aimed at making the military – the part of the society that has for decades guaranteed the secular character of the Turkish statehood - more accountable to the civilian rule and at limiting the powers of the judiciary which has routinely opposed the government.

It was obvious that the leverage by the government considerably affected the outcome of the referendum. Polls showed that some 50% of Turkey's population knew absolutely nothing about the 26 points of the proposed reform. It is indicative of the overall public opinion dynamics in Turkey that, according to The Guardian, 20% of those polled said Turkey should mainly partner Middle Eastern countries in international politics while only 13% favored the orientation towards the EU. Even last year, the distribution of responses was the opposite of the above. Turkey's pro-Iran stance and harsh reaction to the Israeli special forces' attack against the Gaza Freedom Flotilla in May, 2010 reflected the drift of Ankara's priorities from Euro-Atlantic cooperation towards the struggle over a bigger regional role.

Experts deem Turkey's nearest future fairly unpredictable despite the uncontested victory of the Justice and Development Party in the recent referendum. Well-known historian and opposition activist Mehmet Perinçek from the Institute ofAtaturk's Principles and Reforms at Istanbul University said that in the process the ruling party had illicitly employed the capabilities of the state machine to further its agenda. In his view, the amendment of Turkey's constitution would undermine the independence of the judges and enable the Justice and Development Party to impose its ideology widely regarded as latent Islamism on the country's judicial system. Moreover, Perinçek holds that the reform will help the US put into practice its plan of pushing Turkey into a civil war which the country's pro-US government is preparing jointly with Kurdish separatists.

Edward Popov, chief research fellow with the Black and Caspian Sea Center of the Russian Institute for Strategic Studies, said the referendum had demonstrated that Turkey's political scene is dominated by moderate Islam and the Neo-Ottoman ideology carried by the Justice and Development Party. The political landscape emerged as a natural result of reformist trends in the post-Kemalist Turkey and the army's loss of grip on the country. Citing the uncertainty of the situation in Turkey, Popov does warn against concluding that its departure from the Kemalist legacy is irreversible.

Washington reacted positively to the outcome of the referendum in Turkey. At least on the verbal level, the US is backing Turkey's Eurointegration bid, and the reform taming the influence of the military will better align the country's legislation with the EU standards. Much of the success of the Justice and Development Party can be credited to its advocacy of Sufism. This currently prevalent brand of Turkey's Islam can be traced back to Muhammed Fethullah Gülen, a preacher who opened hundreds of religious schools in Asia and Africa. In the past, Gülen was suspected of forming in Turkey an Islamic elite which was – by penetrating the country's administrations and secret services – to gradually transform the model of the Turkish statehood and to erode its underlying secular ideals enshrined by Ataturk. In 1998 Gülen was accused of conspiring to overturn Turkey's existing political system and forced to emigrate, but charges against him were dropped when the Justice and Development Party ascended to power. At the moment numbers of Turkey's statesmen are known to maintain ties with Gülen.

The creed of Gülen's movement is that for Turkey reverting to Sufism would mean regaining its nearly lost Muslim roots, but the ideology likely conceals a phenomenon of a totally different nature. Former FBI agent Sibel Edmonds claims that the schools established by Gülen are actually fronts used by the CIA to carry out covert operations worldwide. Gülen's own dream is a new edition of the Ottoman Empire, a Great Turkey stretching from the Balkan mountains - across the whole Balkan region, the Arab East, Russia, and Central Asia – to China. Curious revelations can be found in the book written by Gülen's former adviser Nurettin Veren who claims that the CIA is pouring money into the organization ran by his former boss.

Gülen is regarded as a foe by Turkey's various ethnic minorities for his assimilationist aspirations. Aland Mizell, an ethnic Kurd who teaches at the University of Texas School of Law, says Gülen's schools are rooted in the ideology of the Ottoman Empire and the religious leader's objective is to enforce the assimilation of Kurds.

Interested in perpetuating the partnership with Turkey which dates back to the Cold War era, Washington is toying with at times exotic schemes of keeping the country within the US orbit. Stephen Kinzer, for example, attempts to sell the idea of the US-Iran-Turkey strategic triangle as the pillar of the coming world order in his Reset: Iran, Turkey and America's Future. In geopolitical terms, the arrangement would give the US control over the energy-rich southern part of Eurasia and accordingly strip Russia of its current status. One should keep in mind that Erdogan co-chairs Washington's Greater Middle East project, the objective behind it being to bring about an overhaul of the political map of Eurasia.

As for Turkey's relations with Europe, Ankara is permanently exposed to criticism over North Cyprus and the handling of the Kurdish problem. The two themes are bound to cast a shadow over Turkey's chances for admission to the EU in the foreseeable future, and Moscow can look into the possibility of taking advantage of the situation. In any case, Russia and Turkey can act as partners in strengthening the stability and security of the Caucasus as well as the Black Sea and Caspian regions.

Considering Turkey's dependence on energy import (the country's own hydrocarbon resources are nonexistent) and Ankara's involvement – under widely varying terms – with Azerbaijan, Armenia, Iraq, and Iran it would be a realistic plan for Moscow to boost the arms trade with Turkey in addition to the already impressive cooperation in the energy sphere and the array of already signed hefty deals. Countering terrorism could be another task awaiting joint efforts, but in this area the relations between Russia and Turkey are marred by bitter disagreements. Turkey shelters Chechen separatists and it is an open secret that some of the financial infusions into the separatist cause in Russia's Caucasus also come from the country. Ankara avoids dialog with Russia over the issue, unfairly equating the problem to that of the Kurds who have been granted political asylum by Moscow.

Unless the relations between Moscow and Ankara warm considerably, Russia risks becoming the target of influence exerted by Turkey with its Neo-Ottoman doctrine. The Crimea, the Caucasus, and Central Asia are potential spheres of interest to the proponents of the ideology no less than the Middle East or North Africa. If Turkey never becomes a part of Europe, its rapidly growing population will certainly channel its energy into the Turkish expansion north and north-east.