Reflections on the Ukrainian crisis 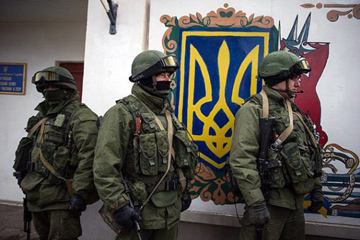 Before we come to the gist of the subject I think it would be useful for the audience to have a short historical overview of the Russian –Ukrainian relations.

The lands of the Zaporozhe kazaks became part of the Russian state in 1654 by the sovereign will of the Ukrainian people who wanted to protect itself from Polish and Turkish oppression.

The present –day borders of Ukraine (with the exception of Crimea and Western Ukraine) were defined in 1924 when the Ukrainian Soviet Socialist Republic joined the USSR. Western Ukraine joined the Soviet Union for two years from 1939 and then permanently in 1945 after the World War 2. Before than it belonged for many centuries to the Austro - Hungarian Empire and for some time to Poland. This complex historical context explains the fundamental differences in the mentality of its peoples in comparison with other Ukrainian regions and especially with the South –East populated mainly by Russian speaking citizens. Of no small importance is the fact that in the Western Ukraine most people profess Greek –Catholic (Uniat) faith in contrast to orthodox belief in the rest of the Ukrainian territory.

The Crimea became part of the Russian state in 1783 as a result of the war with Turkey under the reign of Catherine the Great and all its major cities (Sevastopol, Simferopol) were founded in the 18th and 19th centuries. In celebration of the tercentenary Ukrainian accession anniversary in 1954 Nikita Khrushchev took an arbitrary decision contrary to existing legislation to grant Crimea to Ukraine without even asking the population of the Peninsula if such a move was agreeable to them. When Ukraine became an independent state in 1991 the same one -sided scenario was repeated.

An objective observer would have to state that the last two decades with two revolutions and five presidents were practically lost for Ukraine. No structural reforms or substantial building of institutions were carried out. The economic outcome is rather disappointing.

Ukraine is among very few post – Soviet nation that have not returned to the standard of living of the Soviet period. Ukraine is turning into one of the poorest European countries. With the population of 46 mln the country’s GDP is smaller than that of Greece or Portugal and much less than that of Kazakhstan and Belarus. Ukraine needs $ 15 bln to meet scheduled payments and in fact is on the verge of default.

One has to remember that when the USSR broke up Ukrainian GDP was three times higher than that of Kazakhstan and Ukraine was having on its territory a vast developed industrial infrastructure and big stocks of modern armaments which apparently were sold out abroad during the independence period.

There is a common understanding in Russia that the Ukrainian protests at the Maidan square in autumn 2013 were directed against the corrupted Yanukovich regime which used disproportionate force against demonstrators. But with the development of events and especially when policemen were attacked with Molotov cocktails or shot by snipers it became clear that far-right extremists such as Right sector or the Liberty party took the lead. The members of these organizations are ethnic Western Ukrainians hatefully opposing not just Russian influence, real or imagined, but Eastern parts of the country as well. While not numerous and supported at the most by 3-5 % of the population they are well organized, heavily armed and very aggressive. Their venerated military heroes of the World War 2 like Shukhevich from the Organization of Ukrainian nationalists were most motivated allies of Hitler and SS exterminating not just communists but dozen thousands of Jews, Poles and Byelorussians. These atrocities were condemned as crimes against humanity by the Nuremberg International Tribunal in 1946.

These extremists forced Ukrainian politicians to repeal the 21 February agreement on disarmament of illegal armed groupings and on the creation of the National Unity Government. Instead a “Government of Winners“ was formed.

The preferred slogans of these radicals are: “Ukraine is above all (compare with Deutschland uber alles); Ukraine is for the Ukrainians, others on our territory are subhumans (compare to untermensch).

But the most troubling effect of their “educational“ effort is that during 23 years of independence they have brought up in Western Ukraine a new generation with a completely distorted ideology who was forced to believe that Russia is responsible for all the troubles of Ukraine past, present and future. One would not believe their own eyes seeing on the TV screen Drogobych (Lvov region) University students jumping and crying “Hang a lousy Russian on a tree branch“. Could something similar happen at Moscow or Saint Petersburg Universities?

As was stated before the opinion of the people of Crimea has been neglected twice – in 1954 and in 1991.

The persistent policy of forceful Ukrainization conducted by the Central government in Kiev also contributed to the social unrest in Crimea. But the last straw that broke the camel’s back was the bill introduced to the Ukrainian parliament (The Rada) on February 22, 2014 just after the coup d’etat in Kiev with the proposal to abrogate the regional status of the Russian language . One has to recognize that the bill has not been approved as of yet but the initiative per se has produced a very negative effect on the Russian speaking population.

The Crimea’s official representatives have tried to commence a dialogue with Kiev on the special status of the Peninsula but to no avail. Moreover some high – ranking Ukrainian officials launched a scare- mongering campaign. For example a vice – governor of the Dnepropetrovsk region declared – “promise them now whatever they are asking for, we’ll hang them later”. Yulia Timoshenko, the ex- candidate for the presidency, said for her part: “Russians who do not want to comply with the rules of the Ukrainian modus vivendi should be killed with atomic weapons“.

Under these circumstances the Crimean leaders had no other choice but to announce the separation of the Peninsula from Ukraine and to carry out a referendum on joining Russia. Here it would be appropriate to dispel the widespread illusion that the referendum took place under Russian guns – the truth is that under instructions of president Putin the Russian military (mainly those troops already stationed at the Sevastopol Navy base in accordance with the bilateral intergovernmental accord ) protected people from violence and created favorable conditions for the free expression of the people’s will . The result of the vote was impressive – almost 90 % were in favor of the reunification with Russia.

The overwhelming majority of my fellow Russian citizens considers Russian action in Crimea to have been a preemptive humanitarian intervention. Since Crimea is a multinational territory (50 % Russians , 25 % - Ukrainians, 12 % –Tatars) they believe the policy of radicals from Kiev would have led to armed clashes with thousands of victims . We might say that this is being currently demonstrated by the events in South – East Ukraine. The results of so called anti-terrorist operation with usage of heavy weaponry such as multiple rocket launch systems, cluster bombs, heavy mortars, aviation and tanks conducted by Kiev against its own people are really horrible – about 4 thousand killed among civilian population.

People may ask – “Why were the Kosovars permitted to choose their national allegiance in 2009 while this is denied to the inhabitants of Crimea in 2014? “

Summing up I have to stress that the fate of Russians and Ukrainians is so closely intertwined from a historical, geographical and an ethnic perspective that they will remain fraternal peoples in spite all political turbulences. I strongly believe that at the end of the day common sense will prevail and Ukraine will become a genuine democratic and neutral state which respect the social, cultural and linguistic rights of all the nationalities living on its territory.