Refugees from the Ukraine and silence from Kiev 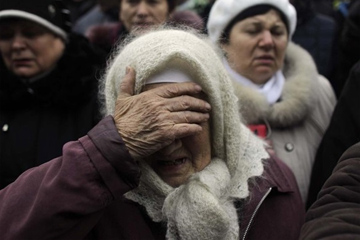 The problem of refugees from the Ukraine, which Kiev is trying to keep quiet, is makes itself more and more evident. Not only the Russian, but even the foreign media are reporting it. According to the UN, from the beginning and Euromaidan which had as its sequel, the so-called "Anti-terrorist” operations carried out by Ukrainian security forces in the territory of east Ukraine more than 10,000 people have already left (1).

Kiev earlier told horror stories about refugees from the Crimea, fleeing the Russian "aggression", but no refugees have appeared. Even though, following orders from the top, pickets took up positions in Ukrainian cities to protect future victims from Russian tyranny, The only tangible case relating to the mass flow of people from the Crimea to the mainland territory of Ukraine, was the arrival of several Crimean Tatar families to Lviv, from where they were later moved on to Poland.

However, according to the representatives of the Crimean Tatar community, many of the refugees leaving the peninsula did so under the guise of members of the extremist organization "Hizb ut-Tahrir" together with their wives and children (2). The activities of this organization in Ukraine were completely legal, but with the transition of the Crimea to Russian jurisdiction, freedom of these Islamist outlaws came to an end.

No other refugees wishing to take refuge under the wing of Kiev in the face of the "Russian occupation" were found. However, there were plenty enough people fleeing from the new Kiev authorities and their nationalist right-wing organizations.

Ethnic Greeks and Czechs are fleeing from the Ukraine as well. The first of them, about 4 thousand Greeks in total, have already fled to the Crimea. Secondly, around forty families appealed to the Czech Embassy to provide them with the opportunity to repatriate to their historical homeland (3). Tens of thousands of Russian-speaking inhabitants have taken refuge in Russia, which has taken the majority of the Ukrainian refugees. A large number of persons of Jewish origin have gone to Israel.

The Ukrainian refugee problem is inseparable from the problem of Ukrainian nationalism. The growth of radicalization in Ukrainian society, and the accession to the political pyramid of supporters of an openly chauvinistic ideology could not do other than provoke ethnic tensions. Ukrainian nationalism has undergone a complete process of institutionalization, in both the legal and socio-political sense. The commitment to the nationalist ideology has risen to the rank of political virtue and decency.

Multiplied by the frenzied media propaganda, everything leads to the fact that a considerable part of Ukrainian society sees ultranationalist policies as the only force capable of preserving the territorial integrity of the country. However this leads to an ideological impasse. The Ultra Right wing sees this as one way to strengthen Ukrainian statehood, namely by way of more terror, further tightening of the screws, constricting the path of information, and keeping the rights of minorities to a minimum.

This is the path to confrontation rather than resolving the tight knot of contradictions tied around what is happening in Ukraine. Instead of going to meet the South- Eastern regions, and thereby stop the bloodshed, national politicians demanded that dialogue with the South- East be more severe, even cruel.

The growth of number of people wishing to leave Ukraine could have been triggered by the offer from governor of Dnipropetrovsk region, I. Kolomoysky to pay $10,000 for the capture of Russian dissidents, and the offer by Deputy Governor Boris Filatov to “give the scum give any promises they want and “hang them later” (this was in the Crimea), as well as anti-Semitic banners, which Ukrainian nationalists often resort to (4).

A country in which multiple copies of opus from national chauvinists full of damnations against other nationalities is not, by definition considered stable. In Kiev it was decided that the “mirror” can show mistakes, as can people. In Ukraine it is fully acceptable to talk about its integrity and, at the same time, hold a burning hatred for a considerable section of its own citizens.

Thus, among the "Ten Commandments of the Ukrainian nationalists" of Nicolai Mikhnovsky (1873-1924), there was: "Ukraine for the Ukrainians! So throw foreign oppressors everywhere from the Ukraine". "Always and everywhere promote the Ukrainian language. Let not your wife or your children  ruin your home with the languages of the foreign oppressors "; "All the people are your brothers, but the Muscovites, Poles and Jews are the enemies of our people" ; "Do not take for yourself a wife from these others, otherwise your children will become your enemies."

Today, Mikhnovsky is not considered to be an aberration in Ukraine, but a full blown patriot. Several years ago, his name appeared on the list of contenders for the title of the greatest ever Ukrainian. With such a pantheon of heroes, the emergence of refugees in the country was quite predictable. The timing was also predictable: it occurred simultaneously with the intensification of nationalist propaganda.

And so it happened. Once Ukrainian nationalism became eligible as a founder of political fashion, the number of those wishing to remain citizens of Ukraine sharply declined. The nationalist ecstasy in the Ukraine first appeared in the early 1990s, when it announced its withdrawal from the USSR. There was no limit to the optimistic and rosy predictions of a great future in Ukraine. Just as Nietzsche said: "We have learned what happiness is!" People were shouting in stupid excitement.

However at the same time as the rosy predictions grew, so did the number of refugees who left, mostly to Russia and Belarus.

The situation in 2014 repeats the situation of the 1990s. There is no lack of rainbow predictions for a great future for Ukraine (in this case, European), just as there is no lack in the numbers wanting to leave a country mired in naive dreams. 2014: déjà vu 1990.

The Western media, unfortunately, ignores the problem of refugees from Ukraine. The Western press prefers to keep silent about the sorrows and troubles of tens of thousands of people who have been forced to leave their homes, mostly shifting to Russia and Belarus. But the story of two or three dozen of the Crimean Tatar “Hizb” emigrants fleeing to Western Ukraine and Poland is relished in every manner.

Kiev is silent regarding the refugees. The Ukrainian government, which purports itself to be a guardian of the Ukrainian people, cynically ignores the dimensions of the humanitarian disaster that has struck the country, and its own citizens pay the price of this silence.

2) “The leader of the Crimean Tatars: activists from “Hizb ut-Tahrir” left from the Crimea to the city of Lviv under the guise of refugees” (NewsRu.com, 24.03.14)