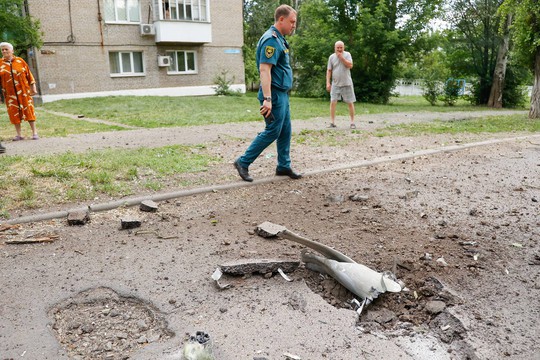 Ukrainian troops and ultra-nationalist formations are still shelling Donbass residential and social infrastructure areas. The capital city of the DPR was subjected to heavy shelling by the Ukrainian military late on June 4th. Multiple districts of Donetsk came under almost simultaneous attack by Kiev's forces, which used howitzers and rocket artillery against many civilian targets in the city. Ukrainian AF shelled the city, killing five civilians and wounding twenty. The shelling also damaged two schools and a local market, Donetsk Mayor Alexey Kulemzin said. In addition, the attack ruptured a high-pressure gas pipeline in the southwestern part of the city.

Donetsk was hit by more than 40 rockets launched from BM-21 Grad systems, as well as by multiple 122mm artillery shells, according to local authorities.

The DPR and the LPR call such acts as “terrorism” and “state-sponsored terrorism”.

Defense Ministry spokesman Major General Igor Konashenkov said during a regular briefing that Russian forces carried out airstrikes “on the outskirts of Kiev, destroying the T-72 tanks and other armored vehicles that were supplied by Eastern European countries and kept in railcar repair facilities.” The spokesman did not specify where the tanks came from, but Poland previously said it had donated T-72 tanks to Ukraine.

High-precision air-based missiles in Kramatorsk, Druzhkovka and Chasov Yar (Donetsk People's Republic) have destroyed the factory shops where military equipment damaged during the hostilities was being repaired and restored for the Ukrainian armed forces.

In addition, the command posts of the 81st and 95th Airborne Assault Brigades of the AFU, as well as 6 areas of Ukrainian manpower and military equipment concentration have been hit during the day.

The attacks have resulted in the elimination of more than 350 nationalists, 10 tanks and armoured motor vehicles, 2 Grad multiple rocket launchers, 9 artillery pieces, 14 special vehicles, as well as tanks with fuel, near Konstantinovka railway station, destined for a group of AFU troops in Donbass and 2 ammunition depots near Bakhmut (Donetsk People's Republic) and Loskutovka (Lugansk People's Republic).

1 MiG-29 aircraft of the Ukrainian Air Force has been shot down during an aerial battle near Slavyansk (Donetsk People's Republic).

Missile troops and artillery have hit 46 command posts, 123 artillery and mortar units at firing positions, as well as 498 areas of AFU manpower and military equipment concentration.

The AFU units are retreating towards Lisichansk after suffering critical losses (up to 90% in various units eliminated) during the combats for Severodonetsk.