Rejection of the Washington Consensus: the global economy is on the verge of change 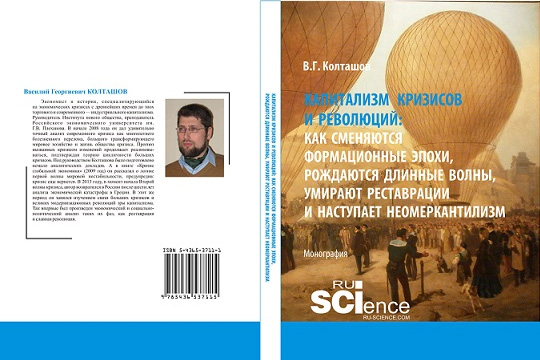 Review of the book “Capitalism of crises and revolutions: how formation epochs alternate, new long waves are born, restorations die and neomercantilism advances”

In early September (2019) a monograph by Vasily Koltashov was published dedicated to the nature of economic crises and their impact on the development of mankind. Plunging into history and deriving patterns, the book raises questions that we usually don’t pose and opens a seemingly familiar phenomenon from a new perspective. Journalist and political scientist Sergei Runko carefully read and assessed this work. His impressions are presented in this article.

A very unusual book about economic crises and their impact on society was published in Russia. Its author is the economist Vasily Koltashov, who became known thanks to the study of the modern global crisis and has extensive knowledge in this matter. The title of the work is “Capitalism of crises and revolutions: how formation epochs alternate, new long waves are born, restorations die and  neomercantilism advances” What is it about? Don't we know everything about crises?

Starting from the preface, the philosopher and a great connoisseur of Marxist tradition, Andrei Koryakovtsev, informs the reader: we are not told about crises what we should know and what is useful for us.

The question is not only poorly studied and superficially presented in textbooks, but also distorted by the dominance of theories over knowledge. This is why every time, in any crisis, there are references to accidents and “black swans,” events that are supposedly unpredictable. Meanwhile, critics of capitalism from the left assert: Karl Marx in his work “Capital” revealed the mechanisms of crises of overproduction and only the bourgeois unwillingness of the middlebrows, dealers and officials prevents them from seeing the obvious.

On the other hand, an anecdote came about a Marxist professor who proudly declares to everyone: “Of the three crises that occurred, I predicted five.” Why did the classics of Marxism themselves miss the terrible crisis of 1873-1880 and could not understand why it turned out to be so long and did not at all give rise to a social revolution? Are critics who haven’t heard of "casus 1873" sensible?

And these are not all the questions that can be asked about crises. The situation with them seems understandable only on the pages of economy textbooks, but once you put your nose into reality and look at the facts, all the beauty of the theories crumbles like cheap nickel from counterfeit sanitaryware. Therefore, the release of this book was expected by many. Especially people who are familiar not only with Koltashov’s articles and public speeches, but also with the report “The Crisis of the Global Economy and Russia”. Which had already caused a stir in the summer of 2008, when the fall in markets had not even begun, but anxiety had already been born.

What was in that analysis? The forecast of a long-term economic crisis, which should give us a new breakthrough in technology, will bury the neoliberal Washington Consensus, revive protectionism and a strong state. All this is already happening. But now, thanks to the author of the book, we know that this should be called neo-mercantilism, or a new mercantilism. We have to live in this era for 25 years.

This is also discussed in the book, but not from the outset. The author clearly sets himself the task of making the world of crises more clear to us. This is almost abnormal, because those who themselves understood little in crises always tried to confuse us.

Koltashov begins by immersing in the distant times of the Roman Empire and we learn of the crisis of the 3rd century, which was terrible and crucial. After giving a lot of details “having put the facts in their places and making it possible to correctly analyse them” (as he said in an interview), the author educed it. And after that showed the next, grandiose and terrible (with the plague, civil wars and population decline, as in the III century) crisis of the XIV century. Everyone can learn the details of the analysis from the book, but there is no point in hiding the conclusion: these were great crises - crises of the highest rank, and they created a field of activity for centuries, which is called the “formation era”.

The XIV century with all its horrors in economy and politics, created capitalism in which we live. Along with this, it gave rise to periodic crises, at first chaotic, but since the curious world economic crisis of 1770-1783 very regular, breaking up into large and medium ones.

The major crises are not named so by chance. Koltashov reveals them to us and introduces those that were not known to science before his research. These are the aforementioned crisis of 1770-1783 and the crisis of 1810-1820.

The theory of major crises is quite thoroughly described in the book, and is based both on facts obtained by many historians of the 20th century and on information gathered by two titans of science. By the world-famous Frenchman Fernand Braudel and the little-known even in Russia Lev Mendelssohn (even in his native Plekhanov University he does not enjoy posthumous honors, because people still do not know why). Both scientists have collected colossal information. The first about the era of commercial capitalism, and the second about industrial capitalism. The author of the book relies heavily on these materials.

The crisis of 1770-1783 that Koltashov educed, was overcome for the first time on the basis of a revolution in industry. In the future, all major crises, which start and interrupt any long wave of development lasting about 25 years (Nikolai Kondratyev’s theory) not only last long (except for the special case of 1948–1949), but generate technological upheavals, change economic policies, and even, in the case of bearish waves, stimulate colonial expansion, expanding the global market.

Thus, from crisis to crisis, the world arrives at the severe crisis era of the 1970s, and after at the modern era, which began in 2008, the era of the crisis turn.

But this is not the only interesting thing that awaits the reader. In the second part of the book, the author addresses the topic of modernisation revolutions. In essence, crises are also revolutions, but economic ones. Ordinary average crises, nicknamed the crises of the "ten-year cycle" and discovered by Clement Juglar, do not count. They adjust the process. But the big crises, which Koltashov introduces to the reader in a systematic way, are revolutions.

The great crises are economic revolutions of the highest order in history. But having arisen after one of them, capitalism spawned nations and their competition, made society more mobile, and the contradictions in it stronger.

These contradictions, growing as a result of the development of states and their failures, give rise to modernisation revolutions. These are the Dutch (XVI-XVII centuries), English (XVII century), American and Great French revolution (XVIII-XIX centuries). They are followed in the XX century by the Great Russian and Chinese revolutions. All these are social revolutions within capitalism, and this is proven by a truly amazing phenomenon, restoration. These are phases of the national modernisational movement that all of them follow. Any restoration has an economic and socio-political side. They are not accidental and they are not a setback in principle.

Koltashov shows: all great revolutions go through the restoration phase, all restorations only imitate a return to pre-revolutionary principles, all restorations contribute to the maturation of society (having gained a new economic foundation) and they all end in some glorious revolutions. All revolutions in the beginning look very radical (although the degree of radicalism is measured by the era), they all aim at something more than the success of national commerce, but all of them - having passed through the Thermidorian curtailment of radicalism, the heroism and asceticism of Bonapartism, come to a quieter phase.

The restoration is the time of the triumph of philistinism and the seclusion of society into private life. But this is also the time of economic work, the refinement of the economic mechanism, which is the true, steady creation of the revolution. How does this all look in detail? This is worth reading. And it is interesting to read such a book.

In the introduction, the author says that “books need to be written when there is something to say”. I must admit: his work is full of new information, discoveries and simply observations that change our understanding of history. Is this useful?

Undoubtedly. However, there is also a “pleasure factor,” which Koltashov once stated in an article about the disastrous language of modern science. It is interesting and pleasant to read his book, because it has both novelty-rich content and a light form. That's all one needs to know, if not about crises, then about this book. However, the work highlights one more extremely important issue for the post-Soviet audience.

With the introduction of Wallerstein, the idea of Russia as a country of eternally semi-peripheral capitalism spread. “Nothing can be changed! We are doomed to be at the margins of history”, several scholars bitterly sigh. In his book, Koltashov shows that the centre and periphery of the world system are mobile, and the centre is expanding. Russia is not walled up in the semi-periphery but fell into it only temporarily. Development in the beginning of a new, neomercantile era is changing the situation before our eyes and will raise the status of the country.

What will follow? This is also described in the book…

An economist and historian specializing in economic crises from ancient times to the epochs of commercial and modern industrial capitalism. Head of the Institute of a New Society, Lecturer at the Plekhanov Russian University of Economics. In early 2008 he gave a surprisingly accurate analysis of the current crisis, a long-term painful fracture, a major crisis transforming the world economy and the life of society. The forecast of changes caused by the crisis continues to be realised, confirming the theory of cyclicality of big crises. Koltashov headed the drafting of numerous analytical reports. In his book “The Crisis of the Global Economy” (2009), he spoke about the logic of the first wave of global instability, warning that the crisis will return. In 2013, at the beginning of the second wave of the crisis, the author returned to Russia after six years of analysing the economic catastrophe in Greece. In the same period, he began to study the connection between major crises and the great modernisation revolutions of the era of capitalism.

Thus, for the first time, an economic and socio-political analysis of such phrases as the “restoration” and “glorious revolution” was carried out.