Remember… The world was saved by a Soviet soldier 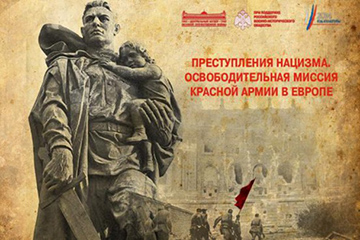 On March 26, 1944, after the battles, which had been conducted at the territory of the Central and Western Ukraine, the red Army approached theriverofPrut, State border between theUSSRandRomania. A multimedia exhibition: “Crimes of Nazism. The liberation mission of the Red Army inEurope”, organized be the Russian Military Historical Society, is dedicated to this unforgettable date in the history of the Great Patriotic War. The exhibition is based on documentary evidences regarding terrible, dramatic and heroic events of the war.

At the exhibition for the first time there are presented some unique photo and video materials, which, due to ethic considerations, haven’t been on display before. Really, it’s impossible to pass by them without tears and pain. These display exhibits are especially timely today, when in some well-known countries neo-fascist movement is rearing its head. Despite some attempts to justify and whitewash the Nazi actions during the Great Patriotic War, their appalling atrocities against the humanity are evident. In every Russian family and in families of the former Soviet republics there lives the memory of those awesome military events. Therefore it’s impossible to tolerate the falsification of the historical facts, what, unfortunately, has become not a rare case at present.

At the exhibition there are on display more that 700 documents – they are documentary corroborations of genocide, plundering, destructive actions by Nazi Germany against the Soviet people and peoples of theEastern Europe, as well as of the liberating and humanitarian mission of the Red Army. Apart from documents, visitors can watch videos of witnesses’ stories of horrible Nazi’s crimes.

At a press conference Vladimir Medinsky, minister of culture of the RF, president of the Russian Military Historical Society, noted: “Out of 18 million European habitants, who had been in Hitler concentration camps, 11 million people were exterminated. I am not sure, that these awesome figures will be sounded at the event in at-present Polish Auschwitz, when 70 years ofOswiecimliberation are celebrated there. I am not sure either, that everyone will recall the fact, that this camp was liberated by a Soviet soldier: not by Russian, nor Ukrainian, nor a Tatar one, but, namely, by a Soviet one”.

By words of Vladimir Medinsky, the exhibition is very special, because is combines a multi media component and unique museum items. With this project we want to jog memory of our compatriots and tell our young people, what price our country paid for the victory and what would have been in this country, in case German fascism had won, as well as how Europe’s liberation was passing in reality.

InMoscownew manege (Gueorguievky by-Str., 3) the exhibition will be completed on March 10; after that it will start travelling through Russia – to Saint-Petersburg, Volgograd, Crimea and other places. The issue of its display abroad is being exploded – in particular, there is a preliminary agreement, regarding the exhibition, withChina. Later on, the exhibition will be digitalized, and its virtual copy as a whole will be presented at the Internet site of the Russian Military Historical Society.