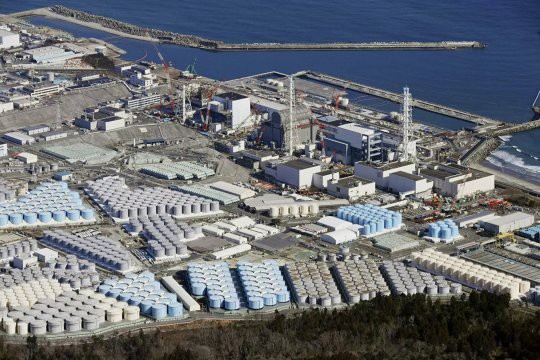 10 years have passed since March 11, 2011, when a devastating natural calamity and a man-inflicted disaster hit Japan, causing widespread damage across the country. The fierce earthquake, the destructive tsunami and the equally crippling accident on the Fukushima-1 Nuclear Plant, which left three reactors disabled, left a lasting footprint on the environment. In the course of the clear-up operation some amount of radiation-contaminated water spilled into the environment. Oceanic streams carried it eastward, towards Alaska. After skirting the  North American continent these contaminated streams reached the Californian coast.

On April 13, 2021 the Japanese government announced that it allows Tokyo Electric Power Co (Tepco), Fukushima-1 operator, to begin preparations for releasing water from the nuclear plant’s reservoirs into the Pacific. These measures will comprise clearing the water of radio nuclides. The leakproof reservoirs whose capacity is comparable to five hundred Olympic pools were constructed after the disaster to store water used for cooling the disabled reactors. A gradual release of 1.3 million tons of water may drag on for three decades.

It took the Japanese government about five years to come to the final decision on this issue – it considered five options, including vaporization and construction of new reservoirs. Dumping into the ocean turned out to be the cheapest of all considered. The first reports to the effect that Tokyo was inclined to opt for the “oceanic” variant reached ecologists in 2019. However, Tokyo dragged its feet over the solution till the “deadline”: the reservoir will fill by the end of next year, preparatory work will take a lot of time, the release is to begin in autumn 2022. It is essential to point out that in case of breaking the schedule, Tepco promised to build an extra storage facility.

According to the Japanese prime minister, “the discharge of used water is an inevitable stage of the deactivation of the Fukushima-1 NPP. The concerns voiced by ecologists and other experts over possible health hazards in connection with an accumulation of radiation in sea products were dismissed by the minister as hearsay[1]. The dumping procedure is to be carried out in small quantities over a period of approximately thirty years. However, the matter is that the currently used purification system clears water of some 62 types of radionuclides but cannot remove tritium. It is thus inevitable that tritium will find its way into the ocean, though its content, as Tokyo assures, will be far lower than stipulated by the IAEA. The exact effect produced by this radionuclide on the human organism is unknown, scientists say, claiming  that  compared to other radionuclides, tritium causes no serious danger[2]. However, Tokyo’s decision has triggered considerable outcry inside the country and beyond.

The Japanese government is thus facing a dilemma. On the one hand, all this affects the situation at home, influencing the interests of fishermen and farmers, and the general public. The business connected with the production of marine products is part of the conservative “agrarian lobby”, which has a certain impact on Japan’s domestic policy. Fishing companies are experiencing severe shortages of marine bioresources, which are shrinking for various reasons, such as excessive fishing and global warming. Unlike before, when small mackerel, lizard-fish and young amberfish were thrown overboard, now they use them for fish burgers. The situation aggravated further after Russian border guards detained several fishing boats for exceeding catch quotas off the South Kurils in 2019. Fishermen fear the consumer will lose trust in the safety of seafood. In an effort to calm things down, the government has announced that Tepco intends to pay compensation to fishing businesses which suffered because of “rumours”. However, given that Tepco has repeatedly been caught withholding information, one cannot rule out technical problems during the water purification and release process.

As for the external problems, the so-called “global ecological vigilantes” were quick to react with criticism, as expected. A Greenpeace statement argues that Japan just chose to save money. However, Tokyo, like other countries of East Asia, consider the activity of organizations like Greenpeace interference in the domestic affairs of a sovereign nation. For example, Japan is blatantly ignoring all protests over its whaling ships entering the Antarctic.

This time, though, the opinion of western environmentalists and top powers of the Confucian world (except Japan) coincided. The Chinese Foreign Ministry has voiced protest over Japan’s decision to release the water on the grounds that it might contaminate the waters of the Pacific. A statement to this effect was posted on the Foreign Ministry website.

Beijing’s reaction manifested itself in a written polemic between Chinese Foreign Ministry representative Zhao Lijian and Taro Aso, Japan’s former Prime Minister, who currently occupies several important positions in the Cabinet of Y.Suga. After T.Aso said the purified water from Fukushima was good even for drinking [3], Zh.Lijian reacted in the following way. «Then let them use it as drinking water, for cooking, washing clothes, watering plants»[4]. China reminded Japan about the Minamata disease of the mid 1950s (“cat’s dance disease”) which was the result of the dumping of Japanese industrial waters from the «Chisso Corporation» and which affected more than 2000 people in the coastal town of Minamata. The disease attacked animals we well (birds were seen falling right out of the skies), affected the nervous system and influenced heredity.

Beijing is displeased with the fact that for Tokyo it is enough to receive the approval of the “elder brother” in Washington to consider it unnecessary to hold consultations with neighboring countries, whose interests are affected by such measures in the first place. Incidentally, the IAEA recommended that Japan set up  joint group on evaluating possible scenarios.

Russia’s Foreign Ministry represented by M.Zakharova has expressed regret and concern in connection with the fact that Japan resolved the problem of Fukushima water without going into consultations with neighboring countries, including Russia[5].

The Republic of Korea shares China’s view. Reports say Seoul is planning to turn to the International Court on the Law of  the Sea. There have been protests in front of Japanese Embassy and Consulate. There has appeared a new slogan: «nuclear terrorism». Tokyo is aware that the relevant provisions are too vague to make it possible to resort to international law. [6]

The Council on Nuclear Energy in Taiwan has expressed regret over the decision of the Japanese government. Taipei has announced its intention to install 33 radiation  detectors off the coast of Taiwan to track any signs of radioactivity. The US, however, has supported its ally. «We are thankful to Japan for its efforts to secure the  transparency of the release of used water from Fukushima-1», - Secretary of State Anthony Bliken said[7].

Washington’s support was voiced on the eve of Y.Suga’s trip to America. Japanese and American leaders are meeting also to verify their positions ahead of the climate summit scheduled for 22-24 April where Japan is expected to announce plans to reduce greenhouse gas emissions. But in order to achieve zero carbon neutrality by 2050, which  Y.Suga made clear in the course of his first address to parliament in autumn last year, Japan will have to launch not only all the deactivated reactors but also to build new ones. [8].

In the early 1990s, Japan embarked on a plan to transform itself into a “green superpower”. By then, Tokyo had made significant breakthroughs in the preservation of the environment, backed by environmental and administrative measures. Even before that, there appeared a euphoria over prospects for nuclear energy. Many prominent figures among intellectuals urged to trust the government’s effort to guarantee the peaceful nature of its nuclear energy program.

Japan chose to move farther towards becoming one of the moderators of the global ecological agenda. The EU moved in the same direction. Selected for a venue for the signing in 1997 of the first international global warming protocol was the city of Kyoto, which until 1868 was a residence of the imperial court and which continues to play the role of the country’s spiritual and cultural center to this day. The Fukushima disaster, however, had a marked influence on Tokyo’s reputation in the sphere of environmental protection and caused Japan to lose the status of a technological leader. The new global warming treaty was signed in Paris in 2015.