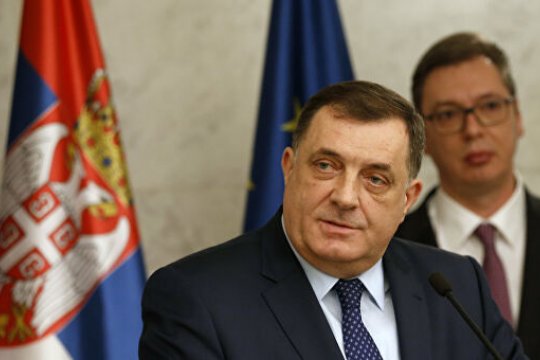 The precedence of the UK’s withdrawal from the European Union naturally allows other European organizations and individual countries to contemplate the previously inconceivable exit option. While at the EU level there are no indications of any other member states planning to follow in London’s footsteps any time soon, in the Balkans, Bosnia and Herzegovina, which since the 1990s has been touted as a “window of international peacekeeping,” might by weighing a similar option. In an appeal to members of the republican parliament, Milorad Dodik, who sits on the collective Presidium of this former Yugoslav republic as a representative of the Serb-led entity in Bosnia, Republika Srpska (RS), called on his fellow citizens to prepare for secession from Bosnia and Herzegovina. He argued that the terms of the 1995 Dayton Peace Agreement, which cemented the country's current state system, had stopped being implemented.

Deliberately speaking in English, Milorad Dodik said: “Farewell to Bosnia and Herzegovina. Welcome exit!” He added that his call had been prompted by a a recent ruling by the Bosnian Constitutional Court, which rejected a regulation passed in Republika Srpska on farmland that used to belong to the Yugoslav state as unconstitutional.
The law, adopted late last year, declared such land as property of Republika Srpska, but the court ruled that the state of Bosnia was the owner.

Earlier, Milorad Dodik said that Republika Srpska “has embarked on the course of leaving Bosnia and Herzegovina and this course is irreversible.” The first step in this direction was the Bosnian Serb representatives’ refusal to work in government at the republican level.

All this being said, there is still no reason to talk about any final decision having been made in Banja Luka to withdraw from Bosnia and Herzegovina as the Bosnian Serb leaders try to leave the doors open for a possible compromise. For example, the RS lawmakers decided to ask the central government in Sarajevo to reconsider the Constitutional Court’s decision and reshuffle its lineup (three out of nine of which happen to be foreigners).

Still, the eventual breakup of Bosnia and Herzegovina looks like a pretty real scenario, primarily due to the West’s stubborn wish to draw this former Yugoslav republic into the orbit of the Euro-Atlantic partnership, against the will and interests of many of its citizens, above all the Bosnian Serbs. As frankly admitted by Avangarda, a leading Sarajevo-based publication, “Bosnia and Herzegovina’s movement into NATO is not exclusively its internal affair. This is one of the priorities of US-British policy and most of the countries of the European Union, led by Germany. Therefore, the most powerful countries of our time, primarily the United States of America, are interested in bringing Bosnia and Herzegovina closer to NATO.”

“The political structures in Bosnia and Herzegovina who oppose this process will face [these powerful countries’] uncompromising pushback, and any attempt to prevent the country from joining NATO will be suppressed and punished,” the authors warn. [2]

All this means that the Sarajevo authorities are capable of deliberately destabilizing the situation in Bosnia and Herzegovina to provoke an internal conflict and urge the United States and the North Atlantic Alliance to intervene. This also means that the Bosnian Serbs may really have no other choice but to declare their self-determination and turn to other states for support - first of all, to Serbia.