Restoration of Syria: words and deeds 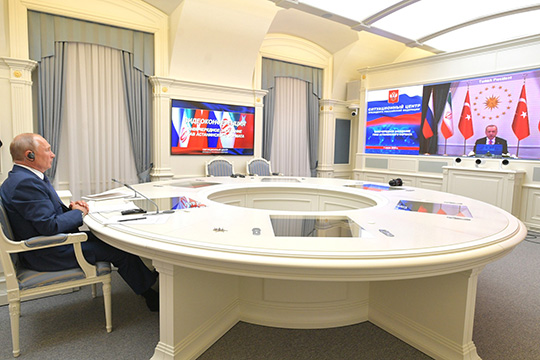 On July 1st leaders of Russia, Turkey and Iran gathered for the next summit on Syrian settlement. Given the pandemic, the summit was held on-line, in the format of a video conference.

In their closing statement the leaders of the three countries – Vladimir Putin, Hassan Rouhani and Recep Tayyip Erdogan – underscored the importance of complying with the principles of sovereignty, independence, unity and territorial integrity of Syria and condemned any attempts to create “a new reality, …..including illegal initiatives to establish self-rule” in some areas, namely, in the territory off the Euphrates River.

The participants in the conference discussed efforts to be taken to restore the country. Fortunately, the conditions for it were ripe, Vladimir Putin said: «The level of violence in Syria has declined considerably, life is gradually coming to normal, and the most important thing is that there are all prerequisites for a sustainable political and diplomatic settlement on the basis of Resolution 2254 of the Un Security Council».[i] Considering this, the presidents of three countries “urged the international community, particularly the UN and its humanitarian agencies, to boost their assistance to all Syrians without discrimination, politization or preliminary conditions».[ii]

Restoration of war-ravaged Syria acquires an ever greater urgency, for a successful political settlement is unachievable without rebuilding the country’s economy and infrastructure. As the conflict continues, the volume of resources needed for the country’s reconstruction is all but growing. According to the United Nations, the cost of restoration will amount to some 250 billion dollars, which is four times more than Syria’s annual GDP before the war. Two years ago Bashar Assad, in turn, estimated the amount needed at 400 billion.

Hypothetical investors comprise the European Union and the rich Arab countries. But neither the former nor the latter is rushing to invest heftily, limiting their assistance to moderate humanitarian aid. Both western and Arab investors prefer de facto independent Trans-Euphratia, which, naturally, finds no understanding with Damascus.

As for Syria as a whole, Europeans make the assistance conditional on cessation of military operations, and, first of all, on the much-needed political reforms. Unlike before, when the West insisted on a change of political regime, now they talk about its greater democratization in line with European standards. Whether such a change of political paradigm is practicable amid  the ongoing war with terrorism is unclear. What is meant is yet again the removal of Bashar Assad from the country’s political landscape.

The position of the United States on Syria is particularly tough and aggressive. Washington continues to believe that the tactic of exerting maximum pressure will work well, both in the case of Tehran, and with Damascus.  The United States will render humanitarian assistance to the destroyed areas of Syria that are under control of the central government only after the launch of irreversible political reforms,  US Special Representative for Syria James Jeffrey said in November 2019, adding that the US will continue to work with the allies so that they pursue an identical policy.

In the middle of June Washington, following the standard pattern, tightened economic sanctions yet again, as part of the Syria Civilian Protection Act, known as the Caesar Act. A total of 39 physical and legal persons in Syria, including the country’s president, fell under the sanctions. In addition, from now on restrictive measures can be introduced against companies and business people that cooperate with Syria, and with Russian and Iranian commercial organizations operating on the territory of Syria.

China has described the new US sanctions as “inhuman” while Russia’s Permanent Representative to the United Nations, Vasily Nebenzya, said that the Caesar Act is aimed at overthrowing Syria’s legitimate authorities. But when did Donald Trump listen to what is said? As a result, experts of analytical group Stratfor conclude: «The newly introduced American sanctions against the Syrian government are set to prevent Damascus from getting the support of such potential partners as China and the United Arab Emirates. After the coming into force of tougher American sanctions, countries that signaled readiness to render support to Syria are unlikely to find participation in the restoration of the war-torn country an attractive option».[iii]

Israel is playing its game. Jerusalem de facto associates with western capitals but pursues its own motivation. According to Israel’s former Military Intelligence Chief Amos Yadlin, the Israeli government wants Damascus and Moscow to understand that restoration of the war-devastated Syrian infrastructure is impossible as long as pro-Iranian units deployed in Syria “threaten Israel”.

Arab monarchies think along the same lines: they do not want pro-Iranian Syria. Not surprisingly, Riyadh has been trying to establish relations with Syrian Kurds, regarding them as a buffer against the spread of Iranian and Turkish influence in the region. At the end of last year Saudi Aramco got down to prospecting for oil reserves in Deir ez-Zor province.

In turn, UAE Foreign Minister Anwar Gargash is urging Arab nations to “face towards Syria”, or it will fall under the influence of Iran, Russia, Turkey and the United States. Meanwhile, Syria is building relations with a whole number of countries of the Middle East and Maghreb – Iraq, Lebanon, Algeria, Oman, Egypt, Jordan. But apparently, these countries are unsuitable for the role of investors.

As for Turkey, it is restoring only the Turkish-occupied Syrian regions where they have set up a local administration, introduced the Turkish lira, and opened Turkish post offices, which also perform the function of credit organizations.  Ankara is in  no hurry to participate in the reconstruction of the rest of the country’s territory, particularly since it has no potential to do so.

Not long ago Erdogan advised the Russian president to sell Syrian oil and use the money in order “to get devastated Syria back to its feet” (and simultaneously create a solvent market for Turkish construction companies – A.I.). In the opinion of the Turkish leader, the project should be financed by the Russian side.[iv]

Damascus views Ankara’s initiative as an attempt to assume control of Syrian natural resources without any permission from appropriate authorities. Turkey will not be given permission to engage in oil exploration in Syria, the Syrian Ambassador to Russia Riyad Haddad said. Bashar al-Assad made it clear two years ago that Syria was planning to revive «at the expense of its own resources and assistance from friends».

One of these (if not the main one) is Russia. In 2016 Russia and Syria signed an agreement on the restoration of Syrian war-devastated infrastructure. The total volume of investments needed for that was estimated at 850 million euros. Later, the two sides came to agreement on  a few dozen investment projects, mainly in oil and gas production, energy generation, transport. It is also a known fact that Moscow has been making efforts to raise the resources of third countries for the reconstruction of Syria. According to Crisis Group experts, while doing so Russia «suggests that European leaders stop clinging to an illusion that playing the sanctions and restoration card could still lead to a change of regime», which they failed to achieve by using force».[v]

Iran has announced readiness to contribute to the reconstruction of Syria. Many lay hopes of restoration projects on China, which invested billions of dollars in the Syrian oil industry before the war and which has no intention to part with its investments.

As time passes, an aggravation of economic situation in the country will be accompanied by a rising number of refugees. Syrian migrants, sooner or later, will become yet another destabilizing factor in the region, along with  Palestinian refugees. Inside Syria proper, the conflict may escalate again, causing a revival of terrorism, which has both ideological and social and economic roots.

Given the situation, the Russian president warned in 2018: «Of course, the world community, first of all, Europe, if it does not want an influx of migrants, should think about it, should shake off phobias and just help the Syrian people irrespective of political affiliations».[vi]

But the United States is following its own logic – the measures Washington is taking towards Syria pose an obstruction. The US does not want Syria to become attractive for Kurds, who, the Americans think, should play the role of a buffer in their geopolitical games against the spread of Iranian (and along with it, Turkish) influence in the region. Syrian Prime Minister Imad Khamis is quite right saying that  «the purpose of the hot phase of the war was destruction of the Syrian state with the help of military and political instruments. But the state managed to hold out. So the foes started an economic war…».[vii]

And naturally, the foreign policy paradigm of the present Washington administration is unthinkable without anti-Russian sentiments.  The US Special Representative for Syria James Jeffrey acknowledges: «My mission is to make Russia bog down in Syria». There are no doubts that one of the ways to see this mission through is to force Moscow to pay for the restoration of Syria.

The fact that this causes a lot of suffering to the people of Syria is, apparently, no one’s concern.