Results of the Tourism Development Forum in Sochi, Russia 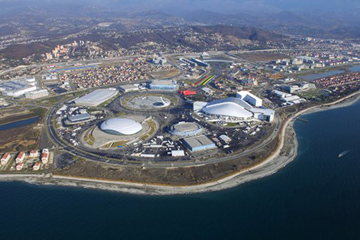 Ministerial Meeting on Mega Events for Sustainable Tourism Development, a forum dedicated to the impact of major events on the sector of economy, convened in Sochi  recently. No doubt, there were serious, in some regards, symbolic reasons behind nominating the city as a site for the convention. Known just years ago as a fairly ordinary Black Sea resort luring summertime travelers with its beaches, Sochi acquired a potential to attract wintertime tourists and established itself in the all-year-round resort league following last winter Olympic games. Moreover, the Olympiad, with its superb organization and exceptional athletic performance, was praised by experts as one of the top-successful in history and brought wide international acclaim to Sochi. Sochi's Olympic mountain clusters are in the process of switching to the 12-months-a-year mode, though at the moment, in the first half of the summer, they operate at or slightly below one half of their maximal capacity. The forum visitors who represented countries with long-standing reputations for Alpine-skiing tourism explained that even their facilities face considerable seasonal fluctuations, but chances are that the post-Olympic Sochi can ultimately do better than the world experience dictates. Uniquely, in Sochi it only takes an hour commute by car or by train to reach the sea coast with its beaches if you head there from the mountain cluster. Nevertheless, even with this optimal configuration combining skiing facilities and beaches in the close proximity, finding a solution to the problem of steady workload for the mountain part of the system during the summertime is a challenge for Sochi.

Both Russian participants of the forum and foreign visitors contributed valuable advice on the subject. Head of Federal Agency for Tourism Oleg Safonov suggested that alternatives – healthcare-related tourism, hiking, equine tourism, etc. – might draw extra flows of visitors to Sochi in the warm season. The business should also take advantage of the availability of truly miracle-working quality of mineral waters found in  spas across the area, offer balneotherapy to tourists, and thus seize the opportunity of converting the former winter Olympic capital into a rival to the Czech Republic's famous Karlovy Vary (Karlsbad). Sochi mayor Anatoly Pakhomov said that further cultivation of the Sochi resort must include the construction of exercise facilities – swimming pools, tennis courts, and well-equipped playgrounds – where Russian and foreign visitors of all ages would enjoy fitness on vacations. Monaco Government Tourism and Convention Authority president Guillaume Rose aired an idea of following the lead of his country and issuing a license to launch the gambling business in Sochi. The initiative was perceived as unexpected yet completely acceptable by the audience, but, in fact, Mr. Safonov indicated that by the time a similar plan had been on the table at the Russian government for weeks. Safonov, in the meantime, proposed a strategy of marketing 20-day tours to Sochi including ten days at the skiing facilities and ten – in the coastal zone. World Tourism Organization secretary Taleb Rifai urged the Russian government to promote Sochi with its broad spectrum of capabilities as a congresses and conferences hub catering to business tourists.

Overall, the June 16-17 Sochi tourism business forum proceeded in an atmosphere of cooperativeness, trust, and creativity and surely accomplished its original objectives. Speaking of those, Russia's Minister of Culture Vladimir Medinsky said the meeting pursued a dual goal. Its first part was to boost tourist exchanges internationally, while expanding the territorial scope of Russia's tourist inflow which, as of today, is largely absorbed by Moscow and St. Petersburg, and to invite travelers to a variety of regions of the country, including the Krasnodar province. The second, essentially tactical, part was to demonstrate worldwide that the government and corporate circles dealing with the industry of tourism would not favor a freeze of contacts with Russia. Medinsky stressed that, given the current economic meltdown, businesses more than ever need deeper international ties, not short-sighted and counterproductive policies of pressure and unilateral sanctions. The active involvement of delegates from 27 countries in the Sochi forum highlighted the fact that politicizing the situation around Russia runs contrary to their interests. From this standpoint, the Sochi forum can be seen as one of the multiple examples of successful cooperation with Russia in key sectors of the economy and important spheres of culture.