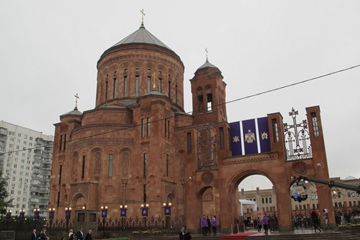 On the 22nd of September, a solemn liturgy heralded the rebirth of the spiritual life of the Armenian Apostolic Church in Moscow. The service was held in the newly constructed Cathedral of the Resurrection.

This central area of Moscow, near Olympic Avenue, has no shortage of new, non-standard architectural structures, but they are mostly made of glass and concrete. Against their backdrop, the Cathedral, and all the buildings of the complex, are decorated with tuff in bright sunny colors, from golden -pink to orange-red, and the effect is unusual  in color, shape, and size. It is not without reason that the Moscow Cathedral complex is the largest religious building of the Armenian Apostolic Church outside of Armenian territory. Included in the complex are the Cathedral , able to accommodate more than a thousand worshipers, a chapel of the Holy Cross , a museum , the residence of the head of the diocese, a teaching and educational complex, a guest house, a refectory, and more. The grand cathedral is located to the left of the main entrance, which is a three-arched front gate. At a height of over 50 meters, and of a grand size, it naturally dominates the complex. But it is not only its size that attracts the attention.

The main entrance is decorated from above with a cross carved bas-relief of Jesus Christ and the inscription: "I am the gate; whoever enters through me will be saved." All the exterior walls encircling the Cathedral are also carved in stone with various images: images of saints, crosses, unique decorations, and inscriptions from St. Mesrop Mashtots: enlightener, creator of the Armenian alphabet, and translator of the Bible. The carvings and inscriptions were made by carver Ashot Adamyan to resemble medieval Armenian manuscripts.

Inside the Cathedral, the light is as bright as outside and all because the granite, marble, and travertine used in the decoration of the walls, was selected in the same color scheme as the tuff outside. Jesus Christ is depicted on a cross under the dome, as if listening to everyone and at the same time keeping his eye on everyone. On the walls of one side of the altar, the artistic images of the main stages of his life are depicted. On the other wall, the historical events showing that Armenia was the first place in the world to adopt Christianity are shown. Mount Ararat is depicted in one of the frescoes, as since ancient times it has been considered not only to be a symbol of Armenia, but also the prototype of the domes of churches built in the Ararat plain (Hripsime , Echmiadzin, etc.). According to legend, Jesus himself pointed out the place where the first church was to be built - Echmiadzin, which in Armenian means “descended from the Begotten One." This ancient legend, popular and respected among the people, is reflected in the fresco at the top of the altar.

In opening this complex, the Patriarch of Moscow and All Russia Kirill, said that it was a restoration of historical justice and stressed the role of Russia and Armenia in strengthening religiousness.

History tells us of the close religious ties between our two nations. If you take the example of Moscow life, then back in the XVI century, one of the chapels of St. Basil’s Cathedral was named in honor of Saint Gregory the Illuminator of Armenia. Two centuries later, the Armenians built a church in Moscow in the Presnya district, in an Armenian side street. It was destroyed during the years when the state "religion" was atheism. For nearly eight decades the only place for Armenians to pray that remained was a plot in Vagankovsky cemetery. The religious life of the Armenian diaspora was reduced to almost zero, even if there were almost half a million of them.

This continued until the 1990’s, when Moscow announced a competition for a project to construct an Armenian Church. However the project did not go ahead. In 2004, the Catholicos of All Armenians Karekin II commissioned the development of a new project from the talented architect and scientist Artak Gulyan. In the same year the foundation of the complex was laid, which was attended by the then Patriarch of Moscow and All Russia, Alexy II, with the blessing of the Catholicos of All Armenians Karekin II. But the actual building was only started in 2006

The Cathedral was built in classical Armenian style. When choosing the facing materials, it was decided to use orange tuff, as in the spiritual center of Armenia - Echmiadzin. It took more than a hundred train cars to bring the stone from Armenia. 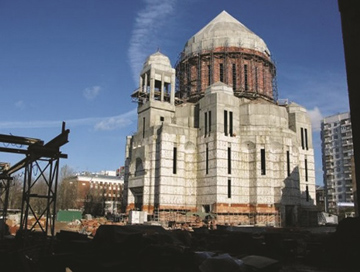 The quantity of construction and finishing works was huge, and the decoration was masterfully executed. However, the Cathedral complex, in the opinion of the builders and potential parishioners, is not only a magnificent building, and the material embodiment of Russian -Armenian alliance and brotherhood, but shows the spiritual unity of our peoples.

A great contribution to the church, both moral and physical, was made by the primate of the Armenian Diocese of Russia and New Nakhichevan, the current head of the church, Archbishop Yezras Nersisian. Truly it is a visible fruit of the Lord - the crown of his many years of fruitful activity in the Russian land - first in St. Petersburg and then in Moscow.

The construction project has retained the Armenian church architecture style, so that the Cathedral, without a doubt, will remind Armenians living in Moscow of their ancestral home, and keep them faithful to the Armenian Apostolic Church. It will attract them to participate in the liturgy and services, and to experience spiritual unity.

The Cathedral museum, and the educational center with a Sunday school and a library, will also soon live an active spiritual life. Plans are extensive, full of life, and fixed on the future. But even now you can see that they are being realized. In the complex Exhibition Hall an exhibition is being shown called "The Armenians in Moscow. The historical path. "

The exhibition reflects the more than 500 year history of the Armenian community of Moscow, from the end of XIVth to the early XXth century. It presents unique documents, historical sources, memorable exhibits, and works of art, many of which are being exhibited for the first time. According to Archbishop Yezras, "the exhibition shows what Russia gave to the Armenians and what the Armenians gave to Russia. It shows that we are strong and rich together with each other, and that we have created common values for the sake of future generations. "

The information section reflects the pages of the history of the Armenian Apostolic Church in Moscow, which occupies a special place because of its historical role in ensuring the ethnic and cultural consolidation of the Armenian people and the development of a spiritual relationship with the Russians. This is confirmed by the statements of famous people captured in the form of citations. For example, "The courage of faith has been the distinguishing feature of Armenians from the earliest days of Christianity to the present time", by G. Gibson or "The church is alive for Armenians, it is the soul of Armenian life, it is concentrated in all of the charity and all of the education of the people", by Witte.

The theme of education as the basis of the national identity is revealed by the example of the manuscripts in the Lazarev Institute of Oriental Languages, founded in Moscow in the early XIX century by the two Armenian Lazarev brothers (Lazarian family). This institute was the first to train academics of different nationalities, which can be described as the beginning of a particular stage in the development of education in Russia.

In the exhibition, visitors can learn about Armenians by surnames that have made invaluable contributions to the development of Moscow and Russia: the statesmen and military leaders, diplomats, businessmen and patrons, writers and actors. The most complete picture of this is produced by documents showing the recognition of their work – in the receipt of public honors and titles of nobility, and family coats of arms.

It's amazing, how at the same time the fates and family ties between our two nations are intertwined. A brilliant assemblage of names has been added to the history of world culture: seascape painter Ivan Aivazovsky, theater directors Evgenie Vakhtangov and Vladimir Nemirovich – Danchenko, musician Konstantin Saradjev, architect Alexander Tamanyan, theologian and scientist Pavel Florensky, historian Leonid Mseriantz. A prominent diplomat and military leader, Mikhail Loris- Melikov, became Minister of the Interior, Ivan Delianov (from a noble Armenian family) became Minister of Education of the Russian Empire.

It is worth mentioning another construction in the complex. In the center of the Cathedral complex are two figures standing frozen like sentries on guard. Upon closer inspection, you see that they are two sculptured churches, standing on an elevated platform.  Each one has their own inherent architectural features: the Russian Orthodox Church has characteristic flowing lines, and the Armenian Church has sharper ones. Above the dome of each temple are crosses - each framed with its own, traditional, round halo. And between the churches is a square plate from which water pours out, as if from a rock. On the plate is a symbolic inscription written in both languages "The spring of brotherly friendship."

I hope this spring will never run dry.