Revolts in Arab world – who’s next? 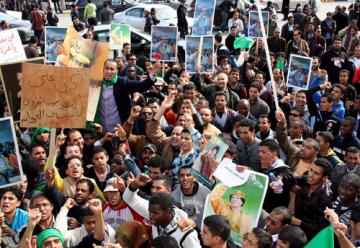 The revolt in Libya makes us seriously revise our attitude to the events in the Arab East. A widespread point of view that the Internet was to blame for creating options for self-organization has been shaken.

Indeed, the Internet opens opportunities for political mobilization and creation of mass movements, but in any case this is only the channel through which different social groups promote their interests.  Accumulation of serious social and economic contradictions when it reaches the point, after which an outbreak of social rage follows, is the real base of national protests.  The Internet is not more than a detonator. It is no longer important whether those who want to play with social sentiments have a clear plan of actions or not. It is much more important that without social-economic reasons such plans just don’t work.

A vast areal of non-Western world has come to a new historical stage. If the regimes in Egypt and Tunisia yielded to the activities of the opposition, the events in Libya show that the roots of the revolt are too deep. A desperate and senseless resistance of Gaddafi showed that even such strict political regime and the formal power to put down any anti-governmental campaigns fail to stop the march of history.

The Islamic world with its opposition to globalism is in search for a new self identification.  Islam as a culture does not accept globalism as such, from the economic relations promoted by the West (modern way of exploitation), and out to pseudo-religions. The leaders of the Arab East, who more or less personified “the dictatorship of order” failed to express real concerns of their nations.

Some of them obediently followed the Western political path, like Murbarak, depriving 80 million Egyptians from the cultural and historical self-fulfillment, others isolated their nations from the outside world holding them in a “cage of family dictatorship” like Gaddafi who threw Libya to the sideline of modern development.

The world now deals with the revolution, which fully meets the definition of this term. Those political forces, which were hiding behind the revolt or trying to take the lead, were not the driving force of the process. They could give a boost to the social protests but not to give a birth to them – even the Islamic organizations and Iranian special services. Besides that now invisible wars are going on within the protests movements for the leadership and these movements require certain ideological base. Indistinct cries in the streets will soon be transformed into words and slogans understandable for every citizen and than the new people will come to power.

Arabs show to the world that people do not want any dictatorships anymore. The dictatorships have demonstrated incapability of the “iron hand” principle, which brings violence and leads to stagnation.

What will be further? Pro-Western political forces do not have serious chances for victory in the countries swept by revolts. Islamic organizations including the Muslim Brotherhood are now acting very carefully and refused from direct claims for power. Most of the countries swept by revolts have strong secular traditions and the leaders of the movements are aware of it.  They choose for such political programs, which on the one hand take into consideration the peculiarities of the modern Arab ideology and, on the other hand would “translate” into the language of the social and political practices the traditional values of Islam.  It is quite likely that within the new ruling circles an alliance of secular and religious organizations will be formed.  In general the opposition of the Arab masses to liberalism and globalism puts forward the cultural and religious dominant of Islam as an alternative. In Saudi Arabia, Iran and even in a secular Syria people understand that there are no serious barriers for the development of this trend. The US did not create any ideological political foundations there which could successfully oppose Islam. Not only because the US did not spend budget funds on it but because Americans were incapable to comprehend what was going on in those countries. The Liberal idea does not work there but the West does not have any other.

Another question on the agenda - What are the limits of the movement of liberation from decayed regimes? For example, it is unlikely that we can forecast the development of events in Central Asia but we may expect that the Arab example will raise the ethnic self-awareness and the nations in this part of the world bringing it to the new stage. They are ready for revolt and protests – especially if the international Islamic organizations start to carry out more proper work in Central Asia than their brothers-radicals from Hiz-ut-Tahrir.

Especially Pakistan gives cause for concern. There are signs that it may become the arena of a new revolt: pro-American orientation, mass poverty and interethnic tension. All these components form a “hexogen mixture” of a ripening conflict.  Pakistan may become the stage for the most dangerous outbreak of social anger in the chain of revolts that swept the developing countries robbed by the Western world.