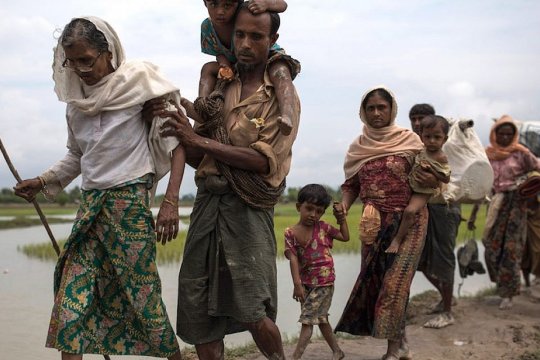 INTERETHNIC CLASHES are not a rarity for many Asian and African countries, and foreign media outlets do not sensationalize them. However, what has happened around the Rohingya community in Myanmar in recent months has largely broken with this pattern. TV screens and newspaper pages have been filled with reports of the purported genocide of the Rohingya perpetrated by the Myanmar authorities: thousands of dead Rohingya, hundreds of burned villages, and thousands of refugees fleeing to Bangladesh. Tough statements were made by leaders, public and religious figures in a number of Muslim states, and the issue was raised at the UN. On certain days, the Rohingya issue in the media was so off the scale that it almost completely eclipsed the situation around Korea, fraught with nuclear conflict.

Myanmar is a multiethnic state. About 70% of the country's population are ethnic Burmese and 90% are Buddhists; the Myanmar government officially recognizes 135 ethnic groups, including Christians (about 7% of the population), Muslims and followers of other religions. However, the Rohingya are not on this list. To the central government, as well as to the majority of the Myanmar people, they are primarily illegal migrants from abroad.

Ever since the 1940s, the Rohingya have had strained relations with their neighbors the Rakhines, who had reason to be concerned about the Rohingya's expansion to their lands. They still remember how, during World War II, the British supplied the Rohingya with weapons to fight Japanese invaders but the Rohingya used those weapons to spill blood of Buddhists.

The Western world intensely disliked the military regimes of Burma/Myanmar.Therefore, any reason whatsoever was sought for denouncing the "Burmese military." And the Rohingya issue proved very convenient: After all, it involved the oppression of a minority - not only an ethnic but also a religious minority. So, myths began to be created to the effect that the Rohingya were the most oppressed Muslim people in the world. Its protection became the concern, on the one hand, of international humanitarian organizations with huge resources, primarily the Office of the UN High Commissioner for Refugees (UNHCR), and on the other, of radical Islamists.

As Myanmar entered a new reality in the form of democratic changes, the voices of those in the international community who called for ending aid and assistance to the Rohingya, because they were not really in danger, became louder. However, at that point, radical Islam entered on the scene. Rohingya enclaves/reservations did not stretch like rubber as the number of Rohingya people was constantly growing, especially young people.

It is noteworthy that in recent years no public or political organizations have taken any action on behalf of the Rohingya. Power in radicalized Rohingya enclaves passed to those who in other countries would be called field commanders.

TODAY, there is a large scale of deaths and destruction in Rakhine. The northern part of the state, where the Rohingya used to live, was subjected to several cleanup operations, with many villages burned. The Rohingya blame arson attacks on the army, whereas the Myanmar military blame them on ARSA militants.

The reaction from the Myanmar authorities was extremely tough. However, how do authorities in other countries respond to terrorist attacks on police stations and how do the military respond to the killing of their comrades? A war is not a picnic, not a school of humanism. Nevertheless, the problem is that in the present-day situation, with global television and the Internet, even the most baseless rumor can be blown up for the sake of ratings; what is important for TV people is that an event become a talking point, and it does not really matter what is said about it.

There is ample evidence that most of the photos and videos about the atrocities perpetrated by government forces that are currently making the rounds on the Internet were made long ago - or, as has already been repeatedly confirmed, they are fakes manufactured far away from Myanmar. Many media reports have been denied by independent eyewitnesses, including ICRC representatives in Myanmar.

THE GENERAL COURSE of events is reminiscent of what happened in the run-up to the NATO operation in Yugoslavia in 1999, which was designed to partition off Kosovo of present-day Serbia. At that time, the world suddenly learned about the existence of a new Muslim community called Kosovars, just as is now the case with the Rohingya, whose rights are violated, which is supposed to justify their acts of violence against the authorities of the country and even their civilian neighbors.

Reports by Western TV networks from Bangladesh areas bordering Rakhine are surprisingly similar to what CNN and the BBC were showing in 1999 from Kosovo.

THE WESTERN PRESS rarely mentions the geopolitical subtext of the current tragedy in Myanmar. Meanwhile, playing the Muslim card around the Rohingya problem has far-reaching goals.

Whereas to the Western public, atrocities on the screen are something like digital horror stories, the Islamic radicals who see the dead bodies of their co-religionists on the screen, even if they carried out a terrorist attack and paid the price for that, get extremely agitated and ready to "exact revenge."

As for Russia, on October 3, 2017, as he received credentials from the Myanmar ambassador to Russia in the Kremlin, President Vladimir Putin said: "We are concerned about the upsurge in ethnic and religious tension in a number of the country's regions. We are calling on all sides to exercise restraint. We know from our own experience that solutions to problems as complicated as these should be sought in the sphere of political cooperation and by political means without any human rights violations."