Romania and Moldova: the project of “latent integration” 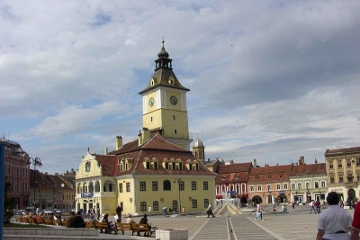 Since the Alliance for European Integration (AEI) came to power in Moldova the country’s raprochement with neigbouring Romania has speeded up. Bucharest has intensified the promotion of its interests in the republic of Moldova (RM) and expanded its presence not only in the mass media and non-governmental organizations but also in the state agencies of Moldova while receiving support from the US.

During the first months of its rule the Alliance for European Integration signed with Bucharest the Agreement on Small-Scale Border Traffic, opened two Romanian consulates (in the cities of Beltsy and Kagul), removed the barbed wire along the Prut River, separating the country from Romania. At the same time the ruling Liberals did not even give a hint to Romania about signing the Base agreement and Border agreement.  Refusing to sign these two agreements Romania actually does not recognize the sovereignty and independence of the Moldovan state considering it to be a historical misunderstanding.

The issue of Romanian passports for Moldovan citizens has been reduced to its lowest terms. Now some 800,000 Moldovan citizens have applied for Romanian passports and 120,000 Moldovan citizens have already received the Romanian citizenship. Even the state officials in Moldova are allowed to have dual citizenship. There are many Romanian citizens already among the Moldovan ministers, deputies and other state officials. Moldova has granted Romania a free access to the national data base of its population register. In all civilized countries where the governments protect the personal data of citizens such a check is allowed only on receiving the official permission from the authorities and can be conducted only within certain limits.

The components of Moldova’s “external” government are becoming more and more obvious. This has been the first time in 19 years of Moldova’s independence that the representative of the unionist political wing, leader of the Liberal party Mihai Ghimpu occupies three state positions at the same time – he is the Speaker of the Moldovan parliament, the President and Commander-in-Chief of the national army.  The Romanian president Traian Băsescu said it directly that he will never sign any Border Treaty with Moldova making it clear that he does not recognize the existing borders between the countries. Romania’s Foreign Minister Teodor Baconschi said that the Moldovan language and Moldovan nation do not exist at all. On September 22 2010, when he visited the US, Romania’s Prime Minister Emil Boc said that the goal of Romania’s foreign policy was the “removal of borders with Moldova within the EU”.

On January 6, 2010, the National Bank of Moldova and the National Bank of Romania signed an agreement on the launch of some mutual “projects” which goal and details are not disclosed. On March 15, 2010, the office of Viorel Badea, deputy chairman of the foreign policy committee in the Romanian Senate, opened in Chisinau. In April 2010, Mihai Ghimpu and the Romanian President Traian Basescu signed a joint declaration on the establishment of a strategic bilateral partnership for Moldova's European integration. It actually means that Romania is acting as the advocate for Moldova’s entry to the EU and sets the subordination between “junior” Chisinau to “senior” Bucharest.

On July 27 2010, the mass media published the information that Deputy Interior Minister and Commander of Moldova’s Interior troops Vasile Dragomir and General Inspector of the Romanian gendarmerie Olimpiador Antonescu had signed a secret action plan. Besides that, Moldova and Romania are going to sign an interstate agreement on military cooperation, which envisages joint military exercises, exchange of classified information, joint planning of defense operation, joint use of shooting grounds etc.

On September 27, the chief of Moldova’s intelligence agency Gheorghe Mihai said that one of the priorities for his agency service was “the restoration of partnership relations with Romanian intelligence”, admitting that Romania’s special services are providing full support to their Moldovan colleagues in contacts with the European colleagues.

Thus, the formation of common governing structures of Moldova and Romania under the Romanian leadership is underway. It is also clear what this cooperation is aimed against considering that Romania is a member of NATO and the statement made by the Romanian President Traian Basescu on June 23, 2010. Speaking about the national strategy he said, that the Russian Army in Transdniester region threatens Romania’s security.

The experts in state symbolic would find especially remarkable the decree issued by Ghimpu on June 24, 2010, declaring June 28, the Day of Soviet occupation. This decree leads to the abandonment of the Moldovan nationhood as such. If June 28 is admitted as the day of the occupation of Bessarabia, the next step will be the return of Bessarabia to its “legal owner” - Romania.

By now already from 15% to 39% of the Moldovan citizens (according to the polls conducted in May 2010) have nothing against Moldova’s unification with Romania.

Instead of making a head-on attack on the Moldovan nationhood and direct unification with Moldova Bucharest has chosen for the tactics of “latent integration”. The goal is to form Romania’s protectorate on the territory of Moldova with common state authorities, businesses and educational institutions. In practice this will be a confederation and formally – “two Romanian states”.