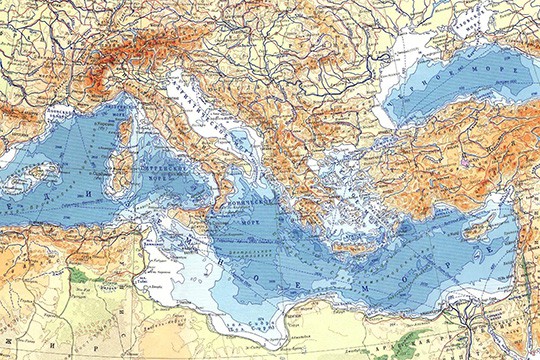 Italy and Turkey are facing an aggravation of the geopolitical rivalry in the Mediterranean. The sphere of Italy’s influence in the region is territorially overlapping that of Turkey, sparkling a variety of diplomatic scandals.

Italy’s new Prime Minister Mario Draghi has described the Turkish president as a dictator with whom Rome will have to cooperate. In response, Turkey’s Industry Minister Mustafa Varank retorted that Turkey “will not accept mentoring in democracy from those who invented fascism”.

Although trade between Italy and Turkey exceeded $17 billion in 2020, the high rate of economic cooperation cannot prevent the growing tension in Turkish-Italian relations. Rome and Ankara are competing for two key regions – Mediterranean and the Balkans. Both powers are influential players in this strategic region, which is known by Italian geopoliticians as Expanded Mediterranean (il Mediterraneo allargato) (1).

The keywording this word combination is ‘expanded’. It implies the unity of Mediterranean with other sea arteries without which the Mediterranean region will be restricted economically and semi-closed and will occupy a peripheral position in the policies of global powers. But along with the adjacent territories of North  Africa, the Middle East and water spaces of the Atlantic, the Mediterranean becomes a point where the geopolitical interests of the United States, the European Union and Turkey come together. According to Rome, the Expanded Mediterranean goes beyond the Gibraltar, stretches to the Canaries, Sahel and Crimea on the other side. This Mediterranean embraces the whole of the  Black Sea in the east, the whole of the Red Sea and the Horn of Africa in the south, and reaches the Alps in the northwest.

Such a vast territory makes inevitable Italy’s rapprochement with global  ‘heavyweights’, as Rome is incapable of providing geopolitical life support for such a giant independently. Hence Rome’s readiness to foster cooperation with Washington so that Italy could become a ‘delegated representative’ of the United States in the region.

Rome is sending signals that Italy’s interests cannot be limited to the Mediterranean – they go far beyond the Suez Canal, extending up to the Arabian Peninsula and Bab el Mandeb. These particular territories are considered spheres of influence by Ankara. Draghi made his first  foreign visit to Libya – a country sensitive to Turkish policy. The Italian minister described his visit as a unique moment for bringing back the old Libyan-Italian friendship (what is meant is the previously high level of bilateral cooperation).

For Italy, Libya provides a possibility to control illegal migration into the EU, participate in oil and gas projects, supply products for the vast African market, including the aircraft industry, machine-building etc. For Turkey, Libya offers the same opportunities plus the possibility of making it part of the ‘neo-Ottoman project”, which envisages restoration of Turkey’s political and economic presence in regions that are traditionally considered parts of the Ottoman Empire.

Turkish-Italian rivalry in the Balkans appears as acute. Rome cannot let Turkey establish its influence in the Balkans – this region plays a significant role in Italy’s national security policy and Italian economy. Operating in Bosnia and Herzegovina alone are more than 60 Italian companies, and at least 30% of Bosnia and Herzegovina’s financial sector is under the control of Italian investors (2). Italy is aimed at guaranteeing the predictability of political processes in the Balkans and becoming primus inter pares for the Balkan countries (3).

For Turkey, the Balkans is historical legacy of the Ottoman Empire, which needs  attending to. Given that geographically, both macroregions, the Balkans and the Mediterranean, "squeeze” Italy from two sides, Rome has to monitor the situation in both  directions in order  to strengthen its foreign policy and guarantee national security. Should Italy succeed in this, it will be able to make such a step as assuming the role of a top global player, having joined its strategic ally (the USA), with a subsequent expansion of its influence to the far boundaries of the Expanded Mediterranean – Syria, Lebanon, the Persian Gulf, the Horn of Africa.

In Africa these boundaries adjoin the French influence zone (Mali, Mauritius, Chad, Algeria, Senegal, Benin, Niger), so Rome and Paris are highly likely to cooperate in this direction in the future. Considering tension in Turkey’s relations with Germany and France, Rome will easily come to agreement with Berlin and Paris. Italian and French diplomacies will find common ground on these issues, as the interests of Rome and Paris currently coincide. Both capitals have no desire to put up with Turkey’s geopolitical ambitions.

The effectiveness of cooperation with Berlin will depend on whether Rome will be able to avoid confrontation with Germany while trying to gain the support of the United States for its policies in Europe and beyond, the Mediterranean. After Britain’s exit from the EU Berlin is keen on making Europe more “German”.  However, Rome's playing on the side of Washington could hamper these plans.