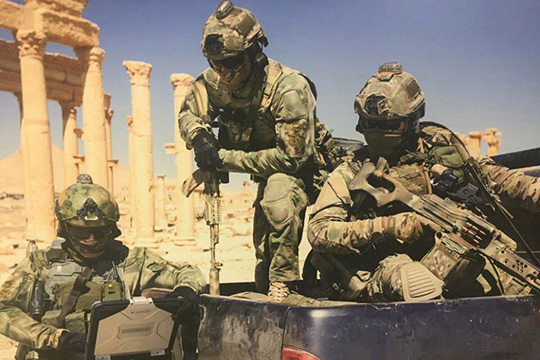 The breakthrough in trade and other economic relations between Russia and Turkey has quite naturally spread to the realm of politics, best reflected in the two countries’ coordinated actions in Syria. This is all the more surprising, since only recently military-technical cooperation between Moscow and Ankara was absolutely unthinkable. Wary of this trend, members of the Western antiterrorist coalition fighting ISIL (a terrorist organization banned in Russia) have been working hard to “tear off” Turkey from Russia, with mass media spearheading this effort.

According to the authors of one such publication recently carried by The Financial Times, and aptly titled “Idlib: Russia and Turkey are preparing for the final battle in Syria, [i] such “battles” have already happened recently, and what is coming up now is a “Russian-Turkish Armageddon.”

“What happens in Idlib could determine the fate of  [Putin’s and Erdogan’s] marriage of convenience, one that has muddled its way through the war, but is now stretched to breaking point.”

The article claims that in Idlib the Russian-Turkish alliance is now breaking down as Ankara is trying to figure out if it could be better off cooperating with Washington, rather than with Moscow. The whole tonality of the article leaves no doubt as to which of the two options is the best way to go.

Indeed, Moscow and Ankara do not see entirely eye to eye on what Syria should look like after the war is over, with the main sticking point being the situation in Idlib and in the northeastern regions of the country controlled by the Kurdish militia.

While Russia is holding out for the earliest possible rout of the terrorists, mainly from the  Hayat Tahrir-al-Sham group, massed inside the Idlib Demilitarized Zone (IDZ), Turkey is generally happy about the existing status quo.

Firstly, even though mainly squeezed out by Hayat Tahrir-al-Sham to Turkish-controlled areas in Syria, some of Ankara’s proxies still remain in the IDZ. Secondly, Ankara fears that active hostilities could set off a new wave of refugees in addition to what Turkey has already taken in, that could fuel social unrest in the country. And, finally, practice shows that no police filters can reveal all the radicals among the incoming refugees, who could blame Ankara for “failing to protect them,” with dire consequences for both.

After negotiating with his Russian and Iranian colleagues in September 2018, President Recep Tayyip Erdogan pledged to ensure the creation of a buffer zone around the perimeter of the IDZ, to achieve the withdrawal of heavy armament from it before October 10, and of terrorist units – before October 15. Moreover, the Aleppo-Damascus road was to open before the end of 2018. Many Turkish experts still argued that these commitments were obviously impossible to meet. Time has proved them right.

After meeting with President Erdogan in January, President Putin was fully understanding about Ankara’s failure.

”Our Turkish colleagues are doing everything possible to implement the agreement. Of course, there are problems there, but we have agreed with our Turkish colleagues on what needs to be done in the near future,” Putin said. He also told a news conference that he had discussed with the Turkish leader “what additional steps Russia and Turkey could take to ensure stability in the Idlib region.” [ii]

A month later, the Kremlin spokesman Dmitry Peskov told reporters that a military operation against terrorists was necessary, but it was not yet clear whether “Turkey or some other countries” would carry it out. [iii] Does this mean that Ankara has at least given a nod to such an operation? Well, this is quite possible, since Idlib is almost completely “lost” for Turkey’s proxy, and, by extension, for Turkey itself.  It also looks like the issue of creating “security zones” for potential refugees is now getting off the ground.

All this gave the well-known Turkish journalist Fehim Taştekin a reason to believe that Russia wants to “resolve the Idlib problem” not in spite of Turkey, but with it. [iv]

On March 9, Turkish Defense Minister Hulusi Akar, announced the start of joint patrols of the Idlib Demilitarized Zone with the Russian military. Moscow did not confirm the information, nor did it deny it either. On March 13, Russian warplanes pounded terrorist arsenals in a series of airstrikes, which Moscow said had been coordinated with the Turkish military. Turkey denied that any such coordination had actually taken place, apparently to avoid the terrorists’ wrath. A couple of weeks later, the very same Hulusi Akar said that Turkish and Russian military were setting up a “single coordination center in Idlib.”

Overall, stuttering as it may be, Russian-Turkish cooperation in Idlib remains on track, and no signs of a close “battle” are anywhere in sight. [v]

Another loose end waiting to be tied up is the “Kurdish issue.” Russia believes that territories currently under the control of Kurdish units should be part of a unified Syria, while Ankara’s main concern is the possible emergence of a Kurdish state on its border (here the interests of Moscow and Ankara coincide). Turkey also wants to eliminate the likelihood of any threat coming from the Syrian Kurds’ main political party - the Democratic Union - which in Turkey is considered an offshoot of the Kurdistan Workers' Party, i.e. a terrorist organization. Here, as Russian Foreign Minister Sergei Lavrov noted, “We [Russia and Turkey] do not have a shared view on exactly who among the Kurds are to be considered as terrorists. Turkey has a special position. We understand their concern, but we still need to sift out ashes from cinders and see which of the Kurdish units are extremists and pose a security threat to the Turkish Republic.” [vi]

It hasn’t been long since Ankara planned to bring the Kurdish-populated regions of Syria under its control. “Times they are a-changing” though, and Turkey is changing with them. It is now speaking about the need to create a buffer zone (a “security zone” where refugees can stay) along its entire border with Syria, and, of course, on the Syrian side of that border.

Russia is ready to discuss the creation of temporary buffer zones, but, according to Sergei Lavrov, “taking into account the position of Damascus,” while simultaneously showing “maximum possible consideration for Turkey’s interests.” [vii]

During the trilateral Russian-Turkish-Iranian summit, President Vladimir Putin suggested that in its relations with Syria Ankara be governed by the terms of the 1988 Adana Agreement, whereby Syria recognized the Kurdistan Workers’ Party as a terrorist organization and banned its activities on its territory. This allowed the Turkish security forces, in their pursuit of PKK units, to stray into Syrian territory to a depth of 5 kilometers. The problem, however, is that Ankara does not officially recognize the Assad government, even though it maintains “low level” contacts with Damascus. Still, President Erdogan’s admission that “we view our future within the framework of the 1998 Adana Agreement,” [viii] speaks for itself.

Meanwhile, more and more people in Turkey now realize the need to restore ties with Syria. According to Mehmet Ali Güller, the respected columnist for the daily newspaper Cumhuriyet, "the sooner the Ankara-Damascus dialogue ... reaches the highest level, the closer the achievement of a political settlement will be." [ix]

That being said, relations between Russia and Turkey are still short of being ideal, with Russian Foreign Minister Sergei Lavrov’s visit to Turkey having twice been postponed by Ankara. The discussion of the Syrian issue was initially scheduled for March 12, then for March 18. Moreover, almost each time President Erdogan is due to meet his Russian and Iranian counterparts, he invariably mentions his close, partnership relations with Washington. This can be regarded as an attempt to “play both sides of the fence,” and a reflection of Ankara’s much-declared multi-vector foreign policy.

The ideology of Pan-Turkism, which was so popular during the 1990s, has since been put on the back burner as the Turkish political establishment is pursuing a three-pronged foreign policy combining the Islamic, Atlantic and Eurasian tracks. Turkey’s geopolitical position at the junction of different civilizations inevitably determines the country’s final choice as being existential, rather than political.

As for the Islamic vector, it leads nowhere, since neither Iran nor the Arab countries will ever recognize Turkey’s leadership, and Ankara will not agree to anything less.

A move towards embracing "Western democracies" would negate all previous activities of the Turkish leadership and the entire ideology of the Justice and Development Party, which has been governing the country for almost 17 years now. Moreover, Europe has already made it clear that the EU’s doors are closed for Turkey, and President Trump’s National Security Adviser John Bolton recently failed to give a direct answer when asked whether Turkey is a friend or enemy of the United States.

“Well, you know they're still a NATO ally; we're trying to work with them, but they've got a very bad relationship with our close friends in Israel. That's something we need to look out on," Bolton said, adding that disagreements "with respect to the conflict in Syria" were another issue. [x]

This certainly does not sit well with Turkey’s political elite, which makes rumors about the "death" of the Russian-Turkish alliance look greatly exaggerated. Just as Fehim Taştekinput it, “the Astana project lives on, because Turkish-Russian interaction continues on the ground.” [xi]