Russia a Force to Be Reckoned with in the Coming Years 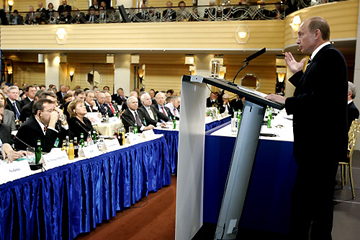 It is not going to be forgotten any time soon how, at the 43rd  Munich Conference on Security Policy in 2007, V. Putin charged the US with building a unipolar world at the cost of “frequently illegitimate actions” and “new human tragedies”. A key point that loomed through the energetic speech delivered by the Russian leader was that the global proliferation of armed conflicts was in fact attributable to Washington's “almost unconstrained hyper use of force” and disregard for international law. “One state and, of course, first and foremost the United States, has overstepped its national borders in every way. This is visible in the economic, political, cultural and educational policies it imposes on other nations”, said Putin in Munich.

At the conference, Putin hammered NATO over its expansion, which he described as “a serious provocation that reduces the level of mutual trust”, and made it clear that Moscow would not be buying the stated goals of modernizing the alliance and maintaining European security as the agenda behind the process. He further criticized the US for pressing ahead with the European missile defense and ignoring Russia's legitimate concerns about the impact the plan would likely have on the global security climate.

Addressing the institutional landscape of international security, Putin warned that the OSCE with its increasingly self-sufficient bureaucratic machinery was being transformed “into a vulgar instrument designed to promote the foreign policy interests of one or a group of countries”. The same interests, Putin stressed, are propped up by mushrooming NGOs whose independence cannot be taken at face value considering the massive financial infusions they receive.

Putin's recently announced presidential bid turned the spotlight back on his strongly-worded 2007 international security statement and prompted attempts to reinterpret it in today's context.

In 2007, Putin rolled out in Munich the perceptions of a newly assertive Russia, a re-energized country with impressive financial reserves which had shed the defeatist 1990ies legacy and was claiming a bigger international role. The reality the world was confronted with in the wake of the speech was not a re-edition of the Cold War, as it fleetingly appeared to the more alarmist of Putin's critics, but an update of the “Cold Peace” that was already in place: it became clear that Moscow and Washington, still partners as necessary, were locked in a no longer latent rivalry over an array of significant issues.

A practical aspect of the change was that, upon articulating its security concerns, Russia adjusted its strategy and took to creating a modern and capable army. While throughout the previous epoch Russia's military doctrine used to be premised in the assumption that the country faced no large-scale external military threats, exactly such threats in their early formative phase were outlined in Putin's speech, and at the moment the Russian military-industrial complex is at work trying to remedy the situation. For example, Russia put on track the manufacturing of the Iskander missiles which are evidently supposed to target European missile defense infrastructures. The rearmament of Russia's strategic missile forces is at full swing, as are efforts meant to neutralize the US military capabilities in space. Moreover, military analysts in Russia look into reviving the Pioneer medium-range missile program as a response to the deployment of NATO facilities in the country's borderlands. The Russian long-term rearmament plan to be complete by 2020 seems to reflect Moscow's anticipation of new rounds of international tensions, with NATO seen as the main peril. No doubt, the US-Russian relations in the foreseeable future are going to be wholly dominated by the security theme.

While the shakiness of the global economy, along with pressing domestic problems, combine into a serious headache for the US Administration, the much-publicized US withdrawal from Iraq and Afghanistan shows that “democracy export”, the underlying concept of the US foreign policy of the past couple of decades, turns out to be a failure. Under the circumstances, Moscow simply has to ask about responsibility for the campaigns in the two countries and the future handling of the chaos to which they now appear to be doomed.

Now that Russia, in concert with China, stalled in the UN Security Council the resolution which was about to authorize a de facto  aggression against Syria, the Arab world's transition is sure to emerge as an additional contentious issue on the US-Russian agenda. Insurgents who will infiltrate Syria are currently exercising in Turkish training camps, and NATO will certainly continue to undermine B. Assad's socialist regime in the country. The original design must have been to form, also in Turkey, a rebel transitional council patterned on the one which eventually took over in Libya, but now a question mark is hanging over the plan due to Moscow's stiff opposition to the military intervention in Syria.

Hypothetically, there are worries in Washington that, as a reaction to an escalation, Russia can supply to Syria the S-300 antiaircraft systems which technically can make NATO air raids impractically risky. By doing so, Moscow would both stage a convincing comeback in the Arab world and put an end to any pretense of a partnership between Russia and the West.

It is completely natural that Moscow has to synchronize its priorities with the actual state of its relations with Washington. While commercial, humanitarian, and academic interactions between Russia and the US are on the rise, Washington staunchly turns a deaf ear to whatever demands Moscow has in the security sphere. The US efforts to sideline Russia geopolitically in the post-Soviet space are topping the list of Moscow's grievances.

Reaffirming commitment to dialog will remain a diplomatic routine, but in Russia the belief in the reset demagoguery is rapidly evaporating. Russia, in the meantime, is switching from the downward to the upward trend within its traditional historical cycle.

At the moment, Putin's plans for his fairly assured renewed presidency are a subject of intense guesswork in the US, but at least one inescapable conclusion is that the visions of the future in Washington and Moscow have little in common. No deals between the US and Russia can abolish the general trend manifest in Putin's 2007 Munich speech: Russia is back to the club of global heavyweights and, like it or not, will be a force to be  reckoned with in the coming years.