Russia – a protector or an aggressor? 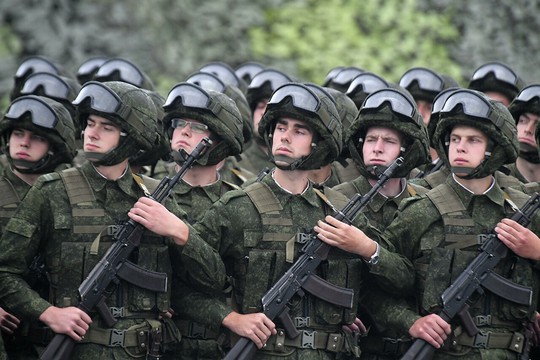 Russia’s military operation against Ukraine, which was launched in the early hours of February 24, was predicted back in the fall. However, the exact date of the invasion was postponed several times, as the Kremlin clearly did not want a war, let alone a fratricidal one. Moscow asked NATO for guarantees of minimum security and ensuring the rights of millions of Russian-speakers living in eastern Ukraine. Vladimir Putin was pretty much content with the “Minsk format,” agreed back in 2015. After all of Moscow’s wishes were ignored by the West, however, the Kremlin eventually found itself in the role of an aggressor, invading Ukraine - a country which is experiencing colossal economic problems.

However, Moscow's position is very easy to justify if we look at the whole situation through the eyes of the Russians, both ordinary people and politicians. In the wake of the Soviet collapse, the former communist elites of Ukraine and of other republics too, began to blackmail Russia, which was going through an economic depression, demanding from Moscow raw materials at preferential prices, and blocking many logistics flows with high duties, while simultaneously starting to gradually phase out the Russian language and culture on their territories. Moreover, they were doing all this while Russia had taken upon itself the obligation to pay the entire foreign debt inherited from the Soviet Union. At the same time, the new democratic Russia was trying in good faith to become a part of Europe, negotiating its integration into the European Union and the North Atlantic Alliance. All it got, however, was a flat refusal and efforts to turn it into a "potential adversary." Are we talking about the absence of civil society and democracy in the Russian Federation? If so, then Russian authoritarianism is the result of the rejection of Russia's real European integration. By the mid-2000s, the Russian authorities had realized that they were not welcome in the United Europe, so they started gravitating towards cooperation with China and began to consolidate their power. The “color revolutions” in Serbia, Georgia, and later in neighboring Ukraine forced them to tighten their control over civil society and the opposition, which they viewed not as political rivals, but agents of the West. That being said, Russia still did not claim the real status of a great power. All Moscow wanted was to quietly trade in raw materials and hydrocarbons, develop the economy, be friends with the EU and the US, and protect its basic interests in the post-Soviet space. Above all, by safeguarding the interests of the hundreds of thousands of Russian-speakers living there, who after the Soviet breakup had turned into refugees and “second-class” residents, deprived of citizenship and the right to speak their native language.

The Russian residents of Ukraine can hardly be called “occupiers.” Up until the dawn of the 20th century, the Ukrainian language, which was the backbone of the new Ukrainian authorities’ nation-building effort, was the language of several central provinces of the country. The eastern part - Kharkiv and Donbass, were essentially regions inhabited only by ethnic Russians. In the middle of the 18th century, Ukraine’s Black Sea region was also inhabited exclusively by Russian settlers who had recaptured this land from the Turks. Russian became the lingua franca of numerous national communities - Greeks, Bulgarians, Armenians and Jews, who had either lived in these territories for centuries, or had moved there in the 18th and 19th centuries. However, following the ouster of President Yanukovych in 2014, the Russian language was de jure banned from the media and official bodies. Simultaneously, the country’s pro-Western authorities began an all-out police persecution of "pro-Russian activists" - politicians who called for dialogue with Moscow. As a result, Moscow was forced to take back Crimea, which was handed over to the Ukrainian Soviet Republic in 1954, since 90 percent of Crimeans were Russian-speakers, and 80 percent were ethnic Russians. It was the very same reason why Russia supported the separatists in Donbass and spent the following eight years in negotiations with the West and Kiev.

However, Washington apparently believed that Russia could not have any national interests. The “Minsk agreements” were ignored and Ukrainian propaganda was busily creating the image of an enemy, while simultaneously destroying friendly and family ties severed by borders established in 1991. At the same time, despite Ukraine's flagrant non-compliance with NATO standards, the prospects of its future membership in the Alliance was becoming more and more obvious.

All of Moscow's requests to halt NATO’s eastward expansion were ignored. Moreover, ever new sanctions were imposed on Russia, which was being increasingly demonized by Western propaganda. At the same time, emboldened by the power of the United States behind its back, Kiev threatened Moscow and repeatedly promised to “clean up” Donbass from separatists. This meant a total genocide of the region’s Russian-speaking population. Ukraine had a chance to come to terms with the current situation, and, following the example of Moldova, whose de jure member, the unrecognized Transnistrian Republic, has existed for 30 years now, freeze the conflict, thus saving thousands of human lives. However, Kiev continued to exchange fire with separatists along the disengagement line, as if to tease the Kremlin.

The outcome was sad. Having amassed his troops near the border, Vladimir Putin in his address to fellow citizens listed all the claims against NATO and Ukraine, while simultaneously making a historical flashback into the history of Ukraine as a state. He also mentioned violations of international law by Western countries, such as the 1999 bombing of Belgrade, the invasion of Iraq, and support for terrorism. The last warning was also ignored by Kiev. Vladimir Putin then made another statement, a short one, where he openly stated that since Russia is NATO’s main enemy, it has to ensure the security of its borders. Just as he was speaking, Russian troops were already crossing the Ukrainian border...