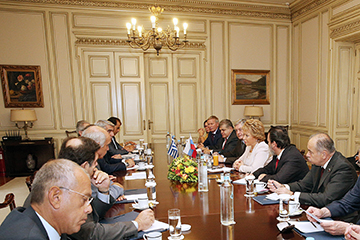 Greece is perhaps Russia’s oldest friend. The history of relations between our two nations is more than a thousand years old. But it is not so much about a matter of the time, but about the strength of the bonds of true friendship between our two brotherly nations, in the depth and extent of its roots, and in its spiritual unity sealed by the Orthodox faith.

A significant contribution to the treasury of the modern history of cooperation between the two countries, which this year celebrates the 185th anniversary of the establishment of diplomatic relations, was the official visit to the Hellenic Republic by a delegation from the Federation Council of the Federal Assembly of the Russian Federation, headed by the chairman of the upper house, Valentina Matviyenko.

Needless to say, the high ranking guest from Moscow was met with genuine warmth on Greek soil. For many Greeks, Valentina Matviyenko is not just a former Russian ambassador to their country, but an Ambassador who deserves to be named such in capital letters: the current chairman of the upper house of the Russian parliament, who is leading the ambassadorial mission, is remembered by the citizens of Greece for her time there as being rich, meaningful, and full of life.

It is largely due to these circumstances, that the Russian- Greek dialogue that took place in Athens was conducted in a particularly honest and genuinely interested manner. The participants in the discussions with the Russian delegation included not only their colleagues from the Greek Parliament, but also representatives of the executive power, businessmen, prominent public figures and Greek religious leaders.

The head of the Russian delegation, Valentina Matviyenko, held talks with Prime Minister Antonis Samaras, the former Deputy Prime Minister and Minister of Foreign Affairs of the Republic of Greece Evangelos Venizelos , and the Minister of National Defense of Greece Dimitris Avramopulous . The participants noted the steady and progressive nature of the development of bilateral ties with satisfaction, stressing that the potential for cooperation is far from exhausted. The positive dynamics of the intensive political dialogue needs to be supported by active actions in the areas of the economy, trade, science, and cultural and humanitarian exchanges.

Special attention was paid to the interaction between the two countries in international affairs. According to both sides, the positions of Russia and Greece are either similar or identical on the majority of European and global problems. The Greek side stressed the importance of cooperation with Russia in the fight against international terrorism, as well as the maintenance of the dialogue between Russia and NATO, as factors for stability and security in Europe.

During the talks the Syrian issue was also discussed. Valentina Matviyenko emphasized the importance of the agreement achieved between Russia and the U.S., and supported further efforts to find a peaceful solution to the situation in the country. "We are strongly determined to continue our course of finding a political and diplomatic solution to the Syrian crisis," she said. The Greek side, in turn, assured her that they also aimed for a political solution to the situation in Syria, and were always ready to contribute to this process.

A substantive discussion about expanding the Russian-Greek dialogue in the trade -economic sphere was held in the Greek Chamber of Commerce in Athens. Its president Konstantinos Mihalos expressed the interest of the business community in Greece regarding Russian investments in the country's economy, especially in sectors such as energy, transport, and agriculture. For her outstanding personal contribution to the promotion of bilateral trade and economic dialogue, the Greek business community honored V.I. Matviyenko with a prestigious award – the Gold Medal of the Athens Chamber of Commerce.

Another theme of the rich program of the visit was the question of cooperation with the Parliamentary Assembly of the Council of Europe (PACE). At a meeting with the head of the delegation of the Greek Parliament in PACE , Valentina Matviyenko informed her Greek companion, spokesperson on Russia Dora Bakoyannis, that Russia attaches great importance to cooperation with PACE and will faithfully fulfill its obligations. At the same time, the head of the Russian delegation stressed that the time had come to shape a positive agenda, which would unite the efforts of parliamentarians together against the destructive logic of dividing Europe into " old" and "new" democracies, on the lines of "teachers" and "students", and to consolidate efforts to find answers to challenges and threats common to all Europeans.

A particular point of the official visit to Greece was the meeting between the chairman of the Federation Council Valentina Matviyenko with the Primate of the Autocephalous Orthodox Church of Greece, His Beatitude the Archbishop of Athens and all Greece, Hieronymus II. During the meeting, the head of the Russian delegation appreciated the efforts of Hieronymus II on the development of inter-church dialogue with the Russian Orthodox Church, noting his great personal contribution to the preservation of Christian values and the deepening of friendly relations between the peoples of Russia and Greece.

In turn, the Primate of the Greek Orthodox Church recalled that Russia and Greece combined centuries of historic ties and cooperation. "In the hardest of times for Greece under the Turkish yoke we received help from Russia. Many Greek cultural figures and figures from the church lived in Russia in the past and have left their mark on its culture. Today, when the economic crisis is affecting the fate of people all over the world, it is essential to combine our efforts," he said. Referring to the situation in Syria, Hieronymus II expressed concern about the situation of the Christian population in the country. "The fate of the Christian population in the Middle East is a very delicate and extremely important issue that deserves worldwide attention,” emphasized the Primate of the Greek Orthodox Church.

One of the main themes of the visit to the Hellenic Republic by the delegation of the Federation Council of the Federal Assembly of the Russian Federation was the issue of the further strengthening of inter-parliamentary cooperation. The hospitality extended to the Russian senators within the walls of the Greek Parliament, could hardly be classified as a purely official event. Only old and good friends, who always have something to share with each other, and plans to discuss for the future together, are greeted in such a way.

Russian and Greek lawmakers have been successfully cooperating on a wide range of issues, not only bilaterally but also multilaterally, successfully cooperating on platforms such as PACE , OSCE and the Organization of the Black Sea Economic Cooperation  Zone, and the Inter-Parliamentary Assembly on Orthodoxy . There are active friendship groups in the parliaments of both countries, such as "Greece - Russia" and "Russia - Greece". Much work is being done through specialized committees , as well as at the level of the apparatus of the two countries within the framework of the European Centre for Parliamentary Research and Documentation .

Valentina Matviyenko and her Greek counterpart, the Speaker of the Parliament of the Republic of Greece Evangelos Meimarakis were unanimous in their assessment of the high-level of interaction between parliamentarians of the two countries in allowing for open discussions on any bilateral or international issues. This is what they are striving to achieve. In particular, the multifaceted aspects of the Russian- Greek dialogue actively involve representatives of civil society, especially the youth. Speaking of which, the speaker of the Federation Council touched on plans for the future. Valentina Matviyenko suggested to her Greek colleagues to start to think even now of how to spend the upcoming event in 2016, the Year of Russia - Greece and Greece – Russia, in the most complete and meaningful way .

The highlight of this official visit to the Hellenic Republic by the delegation of Russian senators was the opening of the Third Russian- Greek Civil Society Forum, dedicated to the 185th anniversary of the establishment of diplomatic relations. The initiative of the Russian- Greek forum itself is in line with the arrangements for the expansion and strengthening of relations between our countries civil societies, which was reached in December 2007, during high level Russian- Greek talks in Moscow.

The first forum was held in Athens in October 2008, and the second in St. Petersburg in June 2009. This, the third of its kind, aims to give a new impetus to the development of a constructive dialogue between civil society organizations, churches, academic and university circles, and the business communities of the two countries. The main topics on the agenda were the present state and prospects for the development of Russian- Greek cooperation, and the historical and spiritual aspects of the relations between the two countries.

The forum participants greeted with enthusiasm the decision of the leadership of the Center of European Studies to award the “John Capodistrias gold medal” to Valentina Matviyenko.  The "John Capodistrias gold medal” was established in honor of a prominent political figure in Greece and Russia, who became the first head of the Greek state. The medal is awarded to outstanding political and public figures that have made a significant contribution to the development of world culture.

In her opening remarks, the chairman of the Federation Council, Valentina Matviyenko, emphasized that the direct dialogue between the civil societies of the two countries was not only evidence of the increasing importance of the humanitarian dimension in modern foreign policy, but also a landmark event in terms of determining a baseline for the joint efforts of the citizens of Russia and Greece to achieve a fair, safe and harmonious world. In such a world order there should be no place for ethnic strife, terrorism, or armed conflict.

"We attach great importance to the humanitarian, human component of the cooperation between our two countries, building a" bridge ", figuratively speaking, connecting the Russians and the Greeks,” said Valentina Matviyenko. “I am sure that Russian- Greek relations will continue to grow stronger and develop. Let our parting words be those of the great Aristotle: "Friendship is one of the bare necessities of life. Since no one would wish to live without friends, even in exchange for all the other good things in life! "