Russia and Latin America: the Strategy of the Mutual Understanding 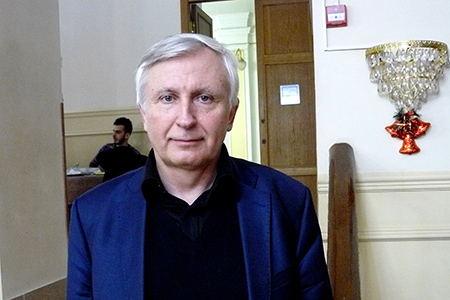 Evgeny Pashentsev is a very broadminded scholar. But his main research is connected to Latin America.

DSc., Professor, leading researcher at the Institute for Contemporary International Studies at the Diplomatic Academy of the Ministry of Foreign Affairs of the Russian Federation, a well-known specialist in the sphere of communication management and psychological warfare organized Russian Latin American Association for Strategic Studies. This event could draw the interest of the domestic and foreign specialists. We discussed this issue with E. Pashentsev in details.

- Evgeny, according to the mass media you announced a new Russian - Latin American Strategic Studies Association (RLASSA) in Moscow. What is the aim of the Association?

- The idea of the Association appeared several years ago. The reasons were obvious. On the one hand it was the growing political, economic, military, scientific and cultural role of Russia in Latin America , our return to the region after the collapse of the USSR and the former crisis on the whole post-Soviet territory. Just remember that our most important “trade” partners then were offshore companies from the British Virgin Islands and the Bahamas. To that haven fled our national wealth.

Sooner or later but one must pay for the absence of the strategic approach. For example, the popular neoliberal models in 1990-s and the lack of the strategic vision of the process led to the great social problems in Latin America which are difficult to overcome even today. Of course, strategic researcher cannot guarantee successful social development but obviously it is a necessary condition. Scientia potentia est, If we mean real science not its parody or propaganda fake which are quite often nowadays in the social studies.

Due to this a year ago I suggested the project of Association to my colleague and friend Héctor Luis Saint-Pierre. He is the director of the Institute of the State Policy and International Relations at the University of Saо Paulo, the author of the numerous works and scientific articles on the role of military forces in the society and the issues of international security. It is also closely connected to my scientific specialization – in both of my dissertations I analyzed the activity of the military regimes parallel to the analysis of the problems of the strategic communication and psychological warfare. That is why we decided to co-ordinate the project.

Héctor gave us active support in different aspects of the Association. Unfortunately his illness prevented us from the meeting within the frame work of the 3d International Conference “Transformation of the International Relations in the XXI: Challenges and Perspectives”. But we managed to meet with his two colleagues from Brazil – Samuel Alves Soares (former president of the Brazilian Association for Defense Studies) and Diego Lopes da Silva (researcher at the Defence and International Security Studies Research Group (GEDES) at the State University of Sao Paulo and a guest researcher at the Stockholm Peace Research Institute (SIPRI)). I think it is very important for Association that the specialists from the two BRICS countries are the originators.

- And in what conditions was the RLAASR organized?

- RLASSA was organized in the beginning of September 2017 under the aegis of the ICSPSC and GEDES. I head ICSPSC since 2000, our basic directions of research are international security, communication management, strategic communication. ICSPSC published 25 books in Russian and English with the participation of more than 70 specialists from 19 countries in Europe, Asia, North and South America. GEDES was established in 2001. It organized many scientific and practical events in the sphere of military construction, military and civil relations, international security. Now it unites specialists from different countries.

28th September 2017 the Institute of Contemporary International Studies at the Diplomatic Academy of the Ministry of Foreign Affairs of the Russian Federation hosted a reserch seminar on the “Questions of the Security in Latin America: Challenges and Perspectives”. It was organized by the ICIS with the help of RLAASA and ICSPSC.

The Director of the U.S. Studies Prof. Sebastião Velasco e Cruz (Brazil), Director of the Institute of the National Problems of the National University Lanus Prof. Ernesto Lopez (Argentina), Director of the Institute of the National Policy and International Relations at the State University of Sao Paulo Prof. Héctor Luis Saint-Pierre (Brazil) took part in the seminar. In their speeches and the following discussion we contributed to the questions of international order and political perspectives of Latin America, South Atlantic as a place of a probable conflict, mass media as a discourse vector for security and an instrument of psychological influence. And during this discussion we presented our Association as well.

- What are the basic areas of the collective reseach of Russian and Latin American scholars?

-Our main area is strategic studies and their implementation in the sphere of bilateral relations between Russia and Latin American countries: what are the risks, challenges and perspectives to these relations from the point of view of national defense and international security. It is also important to analyze international conflicts, the activity of the peace keeping missions, the role of the new technologies in the sphere of the military build-up, practical experience of the law-enforcement agencies, strategic communication as a function of the public administration, the models of social and political development and other topics.

Nowadays it is very important to exchange the international experience of counteraction to the sanctions including short- and long-term interests of the countries and interaction between the countries (Venezuela, Iran etc), specific approach and appropriate informational and psychological support of this collaboration. There are and there will be different systematic long-term attempts directed at various target groups to discredit our actions via mass media controlled by the USA, “independent” experts, analytics and cover organizations.

Russian and Latin American interests in the sphere of extraterritorial law (for example, one-sided unfriendly and politically motivated actions, groundless limitations violence towards other countries, violation of the sovereignty, interference into the countries domestic affairs, judicial expansion having no international law basement and others) are similar it may seem logical to expand the collaboration of the specialists from Russian and Latin America. The forms of collaboration within RLASSA may be various:

Interaction between Russian and Latin American experts of the similar specialization on the bilateral and multilateral basis;

Complete analysis of the degree of the legitimacy of the one-sided, unilateral measures;

Monitoring current problems within the framework of the extraterritorial law;

Analysis of the initiatives to create new international courts which are reputable and relevant, unbiased.

I believe that our work within RLAASR will include not only research projects but also lectures, courses, university programmes. It is also possible to establish international scientific abd consulting centre “Strategic researches in support of Russian and Latin American relations and collaboration.”

- Who was the first to join RLASSA? Does the number of its members rise?

- Now there over 50 specialists from Russia, seven Latin American countries and this number is increasing. I would like to specially mention DSc in politics Konstantin Pantserev from St Petersburg State University, DSc Tatyana Zvereva from Diplomatic Acadimy, DSc Darya Bazarkina form ICSPSC and Marina Shilina from Russian Economic University. There are only 9 Russian specialists in RLASSA now only half of them are specialized in Latin America. It is very good, because we invite different researchers interested in complex transregional strategic projects. It is also important to point out that we are open to different countries because the strategic vision always goes up to the global level due to the globalization processes.

- Besides the seminar in the Diplomatic Academy Argentinian, Brazilian and Rusian members of RLASSA also took part in the 3d International Forum “Russia and Ibero-America in Globalizing World” in St Petersburg where they initiated two panels. I have just returned from my business trip to Bulgaria where I also had an opportunity to discuss the problems of collaboration of Bulgarian specialists with, especially with RLASSA Dr Alexander Sivilov, he is the author of many articles and books on the history Latin America, including the history of relationships of Latin America with the USSR. As far as I know my Latin American colleagues also participated in the number of academic events during these months and were able to introduce RLASSA at them. Basic information about RLASSA can be found on the official web site which was launched in September 2017 with the help of the colleagues from GEDES. The web site is helpful not only with storing information but attracting new members as well. To join the Association is easy. You have to fill in the form on the web site. Our web site has three language versions: English, Spanish and Portuguese. But I hope by February 2018 we will be able to start a multi-language united platform for the strategic researches including Russian and Chinese versions. And the web site of RLASSA will be integrated there.

At present the Association not establish legal entity but can do it on a certain period of its development. We are seeking the quality not the quantity. RLAASR is in the very beginning of its path. I hope to meet in the Association young specialists who are not only interested in the financial question of their research but are also eager to promote interesting international projects on the global scale. Young specialists are very important and this is the greatest problem of our domestic school of Latin American Studies. We face the problem of the replacement of old specialists by the young ones, mainly because of the financial issues.

Our web sites are to be not just the newsfeed about forthcoming events in RLASSA but they will help establish contacts and mutual interaction. That is why we are in search of scientific, informational and practical partners and sponsors. The email address icspsc@mail.ru works for all types of questions.

One of the first companies to answer our appeal to collaboration was International Communication Agency “Sapmar” from St Petersburg which aim is to develop the interaction in the sphere of communication management between Russian and foreign specialists. “Sapmar” is working at a new direction in the sphere of communications - scientific relations. It means the interaction between business and scientific communities. In close collaboration with this agency we develop our internet platforms. And we also hope to co-operate with the International Diplomatic Seminar during scientific events in Russia and abroad. We have loads of plans and their realization is likely to happen in the conditions of difficult international political situation.

- Thank you Evgeny for the interesting talk.